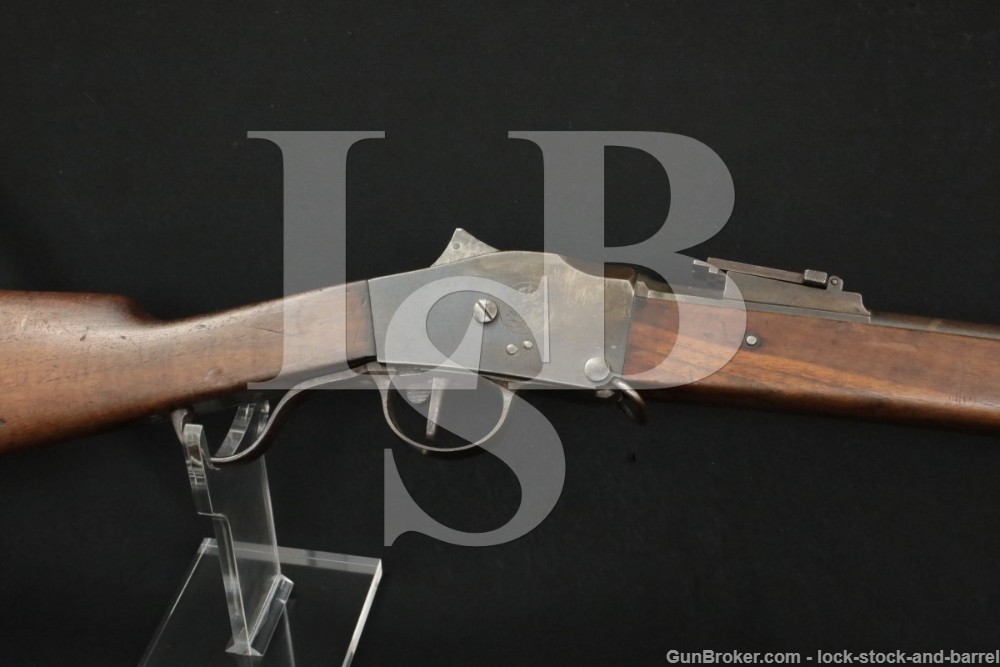 Make: Österreichische Waffenfabriks-Gesellschaft (OE / WG) Steyr of Austria. This rifle was produced as a contract rifle for the Portuguese.

Sights / Optics: The front sight is an inverted “V” post atop a small base. The rear sight is a “V” notched blade attached to a sliding escalator assembly. The sliding portion of the sight is missing. It is marked from “5-20”.

Stock Configuration & Condition: The hardwood stock has a straight grip, nosecap, cutout for the missing cleaning rod, 2 barrel bands, sling loop, and a metal buttplate. The buttplate shows scrapes, discoloration from oxidation and some surface erosion. The stock shows numerous scrapes, scratches and compression marks. Several of these marks have damaged small portions of surface wood. Most of these marks have been oiled over. The LOP measures 14 inches from the front of the trigger to the back of the buttplate. The stock rates in about Very Good overall condition as an antique.

Bore Condition: The grooves are dark and the rifling is deep. There is erosion throughout the bore; more prominent in the grooves.

Overall Condition: The rifle retains about 20% of its metal finish. The metal has lost most of its finish to oxidation. The metal shows scrapes, scratches, discoloration from oxidation and areas of surface erosion. The screw heads show use and oxidation. The markings are deep. Overall, this rifle rates in about Good to Very Good condition as an antique.

Our Assessment: This Steyr 1885 Guedes Rifle was made for the Portuguese government back in 1886. The order was cancelled and never delivered to the Portuguese. The factory sold many of the rifles to the Transvaal and Orange Free State. Many were used during the Boer wars. A Portuguese military officer whose long name includes “Guedes” came up with the rifle’s design, so it is referred to as a Guedes Rifle.
These are rare rifles. This one is in nice shape for its age and has great markings.