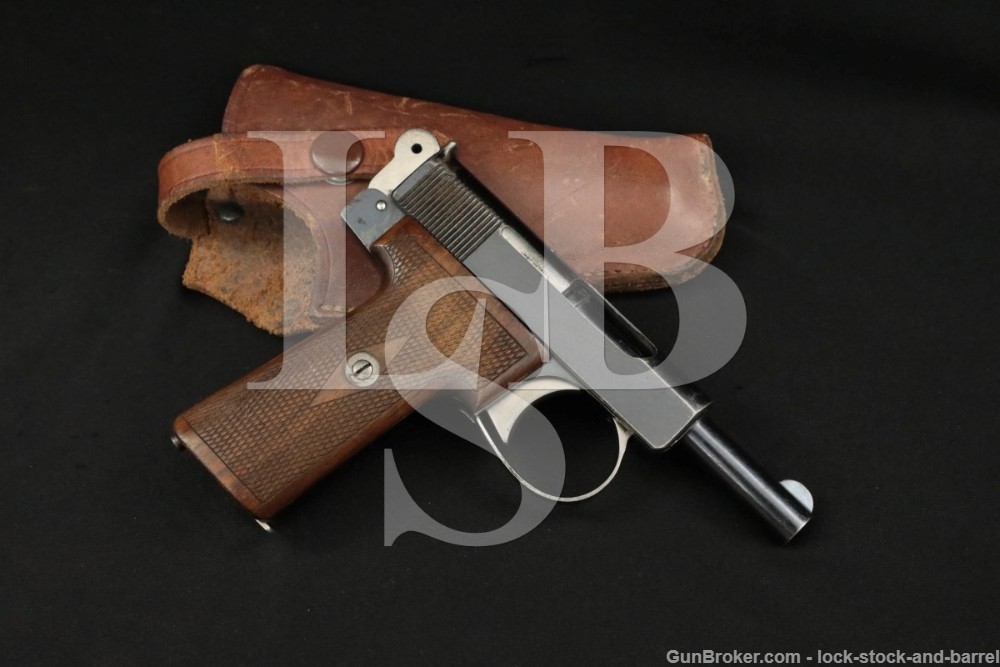 Sights / Optics: The front sight is a rounded blade fixed to the front of the barrel. The rear sight is a “U” groove in the top of the slide.

Stock Configuration & Condition: The grips are checkered wood panels with smooth diamonds around the escutcheons. There is a sliver of material loss at the back of the right panel. The smooth borders show various little nicks and scratches. The checkering shows wear but is generally well defined. Overall, the grips rate in about Very Good condition.

Bore Condition: The bore is bright and the rifling is sharp. There is very little scattered faint erosion in the bore.

Overall Condition: This pistol retains about 70% of its metal finish. There is pitting at the front of the slide and on the left side of the barrel.There is thinning at all leading edges.There are scattered nicks, scratches, dings, and freckles of oxidation. There is moderate operational wear. The grip screws are lightly tool-marked with usable slots. The markings are clear. Overall, this pistol rates in about Very Good condition.

Mechanics: The action functions correctly. It has a thumb safety on the left of the frame. The slide is tight to the frame. We did not fire this handgun. As with all used firearms, a thorough cleaning may be necessary to meet your maintenance standards.

Box, Paperwork & Accessories: This pistol comes with one blued 8-round magazine and a brown leather belt holster marked “32 auto” on the back.

Our Assessment: “William John Whiting was a gun designer working for Webley & Scott tasked to develop a modern self-loading automatic pistol as a possible future replacement for their presumably “outdated” revolver following the adoption of the Luger pistol by the Swiss in 1900. The British wanted a pistol chambered for .455 Webley, a rimmed cartridge, and his Model 1904 design was an attempt to meet that goal, but was unsuccessful. A scaled down version in .32 A.C.P. became the Model 1905, which met with limited commercial success. This was continuously refined during its production and ultimately a total redesign resulted in the Model 1908, which would be destined to be the most successful of all Webley automatic pistols and with few modifications and variations would be offered until 1940. It also served as the foundation for the Model 1909 in 9mm Browning Long and the Model 1913 in .455 Auto (rimless) which was adopted by the Royal Navy”. This is a Model 1908 pistol in .32 ACP that is in about Very Good condition with about 70% of its original finish remaining. This was a Metropolitan Police issued pistol as it bears the “Crown / M.P.” acceptance stamp. This pistol should be sought after by collectors due to its importance as one of the first highly successful British semi-automatic pistols which must at one point have been carried by a British police officer. It belongs alongside its revolver cousins in any Webley collection. Please see our photos and good luck!