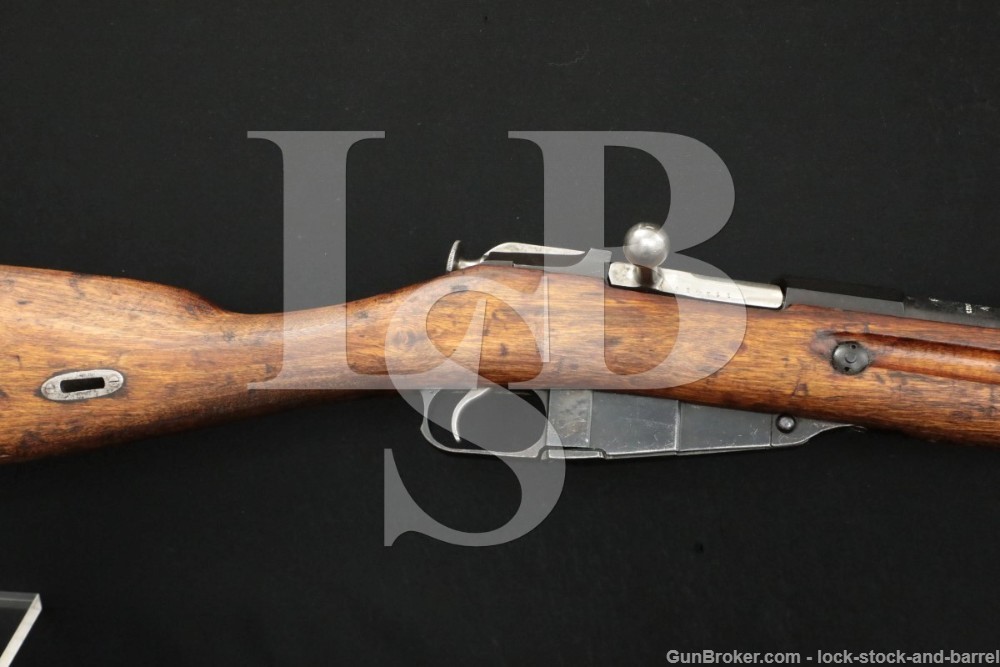 Sights / Optics: The front sight is a bladed post set atop a small base. The rear sight is a “V” notched blade attached to an escalator when in the down position.  The right side of the rear sight base is marked “2 3 4 5 ½ 7 8 ½” (X 100 meters; added by the Finns). The left side of the base is marked with struck out numbers, “4 6 8 10 12” (the old Russian distances in the measurement of arshins). The sight base is used for the escalator. The rear sight is a “V” notched sliding ladder assembly when flipped up. The sight ladder is marked from “13 – 32”.

Stock Configuration & Condition: The two piece hardwood stock has a straight grip, two sling eyelets, two barrel bands, a through bolt, metal nosecaps, cutout for the included cleaning rod, and a metal buttplate. The buttplate shows surface erosion. The wood shows numerous scrapes, scratches and compression marks. Several have damaged or removed portions of the surface wood. Thes marks have been oiled over. The LOP measures 13 ¾ inches from the front of the trigger to the back of the buttplate. The stock rates in about Very Good overall condition as an antique.

Bore Condition: The barrel has been counterbored to about 1/2 of an inch from the muzzle. The groves and the area near the muzzle are grey. The rifling is deep. There is erosion in the grooves and near the muzzle.

Overall Condition: This rifle retains about 90% of its metal finish as refinished. Small scratches and surface erosion show through the finish. The metal shows scrapes & small scratches. The barrel and magazine show discoloration. The screw heads show heavy use. Overall, this rifle rates in about Very Good condition as a refinished antique.

Our Assessment: This Russian Mosin Nagant Model 1891 was built at the Imperial Tula Arsenal in Russia way back in 1896. It is 125 years old. The receiver has nice markings from both the Russians and the Finns. The rifle was left with the Finns during the Russian revolution (when the Finns declared independence) or was captured by the Finns during Wartime (Winter War or Continuation War). The Finns refurbished & updated Model 1891 rifles that were left in Finland or left on the battlefield by dead Russians. This rifle has a desirable Imperial Tula crest and is built on a hex receiver. Best of all it is an antique so no FFL is required…Unless you live in California.
For more Mosin information on the markings see page 215 of Terrance Lapin’s book, The Mosin Nagant Rifle – 5th Edition.