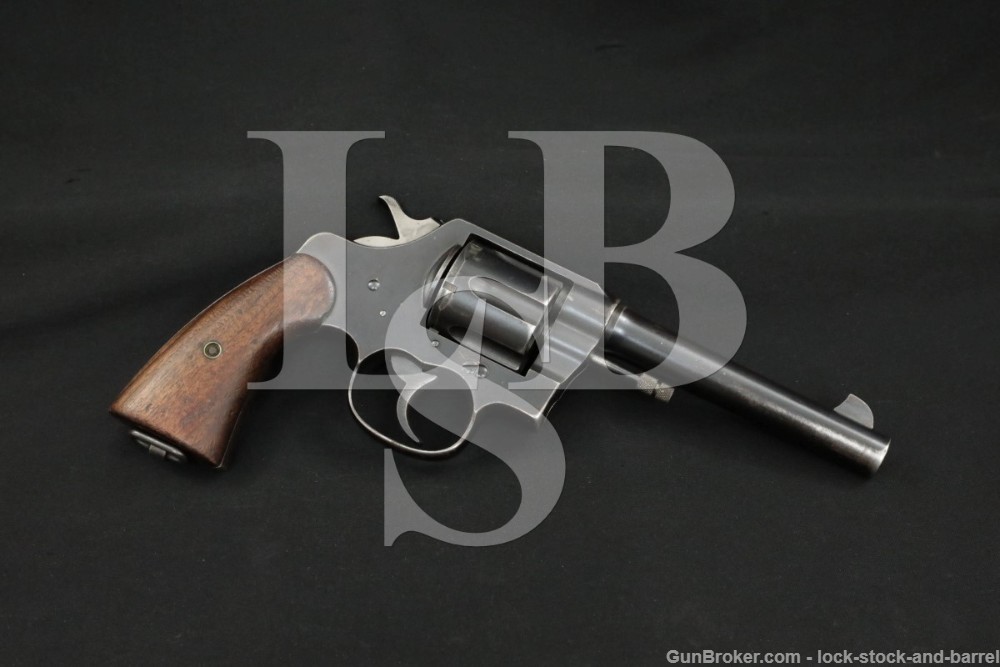 Stock Configuration and Condition: The grips are replacement two-piece smooth wood. The grips have light nicks, compressions and dark marks throughout. There are no chips or cracks. Overall, the grips are in about Good-to-Very Good condition as not original to the gun.

Bore Condition: The bore is mostly bright with well-defined rifling. There is no erosion, but there is minor stubborn fouling scattered throughout.

Overall Condition: This handgun retains about 72% of its metal finish. There is minor thinning on most edges and moderate thinning where the barrel meets the frame and heavy thinning along the backstrap. There is holster wear/thinning on either side of the barrel. The grip frame has for the most part gone to a light patina.  The action shows minor operational wear including a thin turn-line on the cylinder, mostly not through the finish. There is light thinning on all edges of the cylinder. The screw heads range from sharp to tool marked with strong slots. Remaining markings are generally clear, the rampant colt is a little shallow on one side. Overall, this revolver rates in Very Good condition.

Mechanics: The action functions correctly. The cylinder lockup has no play with the trigger depressed on all chambers. The single action trigger pull is crisp and the double action is smooth, if a little heavy. The trigger upon return is a little spongy. We did not fire this revolver. As with all used firearms, thorough cleaning may be necessary to meet your maintenance standards.

Our Assessment: This revolver was made for the U.S. Army, who wanted a revolver capable of using the same ammunition as the 1911 semi-auto. The .45 ACP rounds were loaded in 3 round half-moon clips. This revolver had stepped chambers in the cylinders, the intention of which was to allow .45 ACP rounds to be fired without the half-moon clips should none be available, although the fired cases couldn’t be ejected. This pistol will also fire and eject the .45 Auto Rim, which was a special cartridge developed for Colt and S&W 1917 revolvers so they didn’t need the use of clips. Although this revolver has seen some use, the bore is in rather good shape and the action is in remarkable condition for a revolver of this age. We often don’t see cylinder lockups this good on revolvers that are new in the box, let alone on those more than 100 years old. This revolver ought to get the attention of the Colt collectors out there, especially those with an interest in WWI firearms. Good luck and happy bidding!