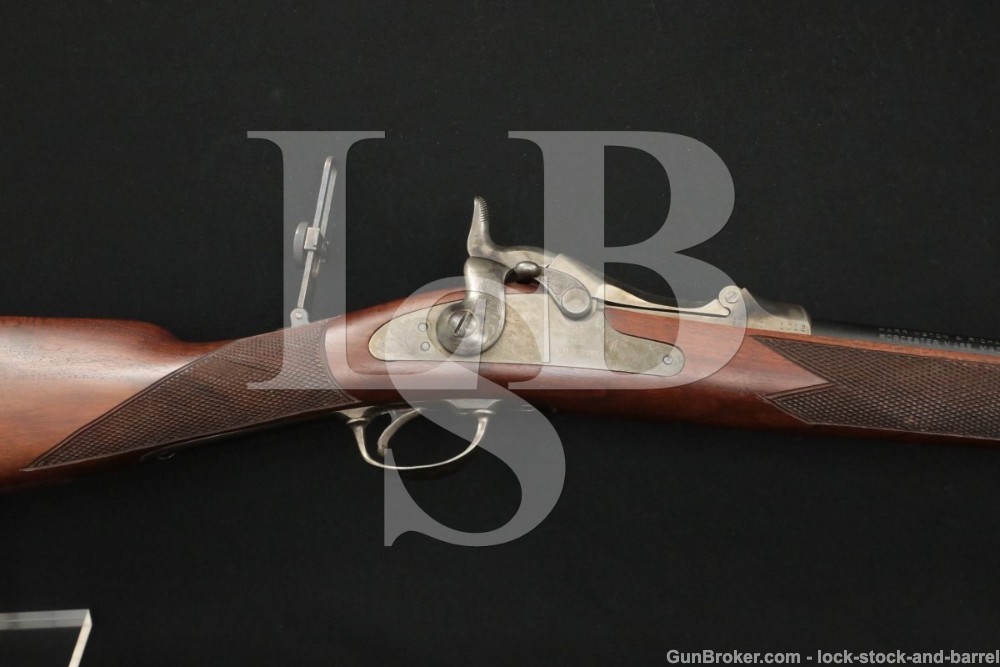 Sights/ Optics:  The front sight is a dovetailed blade with a brass bead. The rear sight is a diopter on the semi-pistol grip which has a peephole.

Stock Configuration & Condition/ Grip: The stock is one-piece wood with a checkered forend that has a cap, barrel band, ferrule and slot for the cleaning rod while the buttstock has a checkered straight grip, straight comb and semi-crescent buttplate. The stock has some minor handling wear including scratches, nicks and dings but lacks any notable defects. The checkering remains sharp. There are no cracks or chips. The LOP is 13” from the trigger to the rear of the buttplate. The buttplate has only minor wear. Overall, the stock is in Fine condition.

Overall Condition:The rifle retains about 97% of its metal finish. The rifle has a few minor scratches and nicks on the barrel but lacks any notable defects. The markings are all clear. The screwheads are serviceable. Overall, the rifle is in Fine Plus condition.

Our Assessment: This Harrington and Richarson reimagining of the Springfield M1873 is a .45-70 government single shot rifle. The Springfield model 1873 was used in the brutal fighting during the American Indian Wars and continued to see service through the Philippine insurrection in the early 20th century. This rifle could be used for reenactment purposes as it fits into a number of military conflicts and/or recreational shooting at the range. Good luck on your bid!