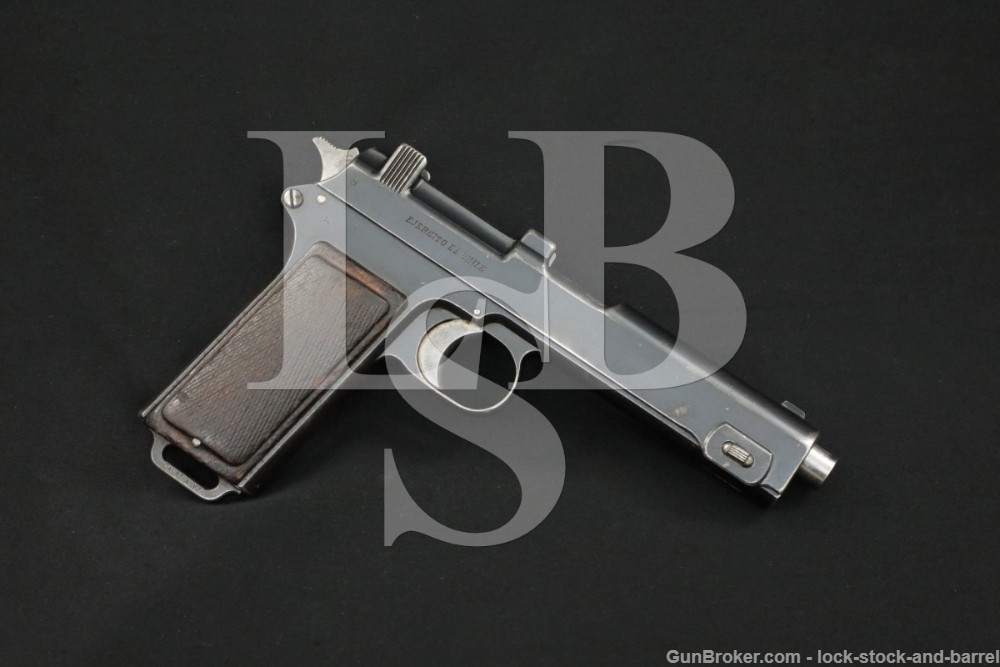 Caliber: 9x23mm Steyr (This pistol has NOT been re-chambered to 9mm Parabellum, and a 9mm Para. round will not chamber.)

Sights / Optics: The front sight is a blade fixed to the slide. The rear sight is a “V” notch integral to the raised grasping boss at the rear of the slide.

Stock Configuration & Condition: The grips are two-piece checkered walnut with smooth borders. The grips have moderate handling wear with scattered nicks, dings, scuffs and scratches. The checkering is worn, but visible. The right panel has minor play to the frame. There are no chips or cracks. Overall, the grips are in Good condition.

Bore Condition: The lands are mostly bright, the grooves are light gray. The rifling is sharp. There is some light erosion in the bore, mostly in the grooves.

Overall Condition: This handgun retains about 85% of its metal finish. The finish is thinning at all edges. Most of the balance is handling wear in the grip areas. There are scattered light nicks, scuffs and scratches. There is some scattered minor surface oxidation, mostly in the grip areas. There are a few spots of minor surface erosion. The action shows operational wear. The screw heads are sharp. The markings are clear, with a very clear crest on the slide. Overall, this handgun rates in about Very Good condition.

Mechanics: The action functions correctly. The slide is tight to the frame. The trigger has a short, smooth takeup followed by a crisp break. We did not fire this handgun. As with all used firearms, a thorough cleaning may be necessary to meet your maintenance standards.

Our Assessment: This is a Steyr-Hahn M1911 pistol (differing from the M12 in that it has a fixed front sight). Hahn is German for hammer. The M12 was evaluated for military use, but was not adapted by the Austrian Army until the First World War began, and was only produced to about 1919. The pistol was made for several different countries and there was even a machine pistol variant produced as the Model 1916. Chile was the first country to contract for the pistol in 1911, and ordered 5000, chambered in 9mm Steyr. This pistol is from that contract, and is correctly marked with the Chilean crest on the left side of the slide and the Army marking “EJERCITO DE CHILE” on the right side. The barrel, slide, frame and magazine floorplate have matching serial numbers. The pistol is in about Very Good condition with about 85% of its original finish remaining. Having been one of only 5000 made, and with an original finish and matching numbers, this pistol is sure to catch the eye of the German, Austrian and Chilean gun collectors. Please see our photos and good luck!