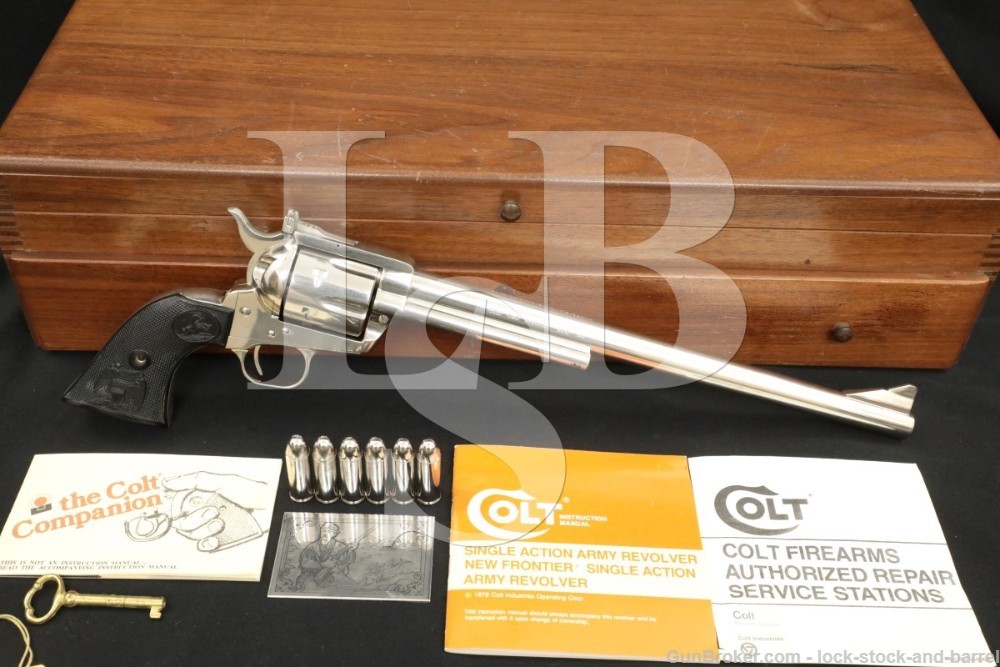 Sights / Optics: The front sight is a serrated, ramped blade fixed to the front of the barrel. The rear sight is a square notch adjustable for windage and elevation in a base pinned to the topstrap.

Stock Configuration & Condition: The grips are two-piece checkered black, hard rubber with rampant colt in oval at their tops and American eagles below. The grips have a few scattered minor marks on the bottoms, but no notable damage. The checkering, colts and eagles are well defined. There are no chips or cracks. Overall, the grips are in about Excellent condition.

Overall Condition: This revolver retains about 95% of its metal finish. There are a few scattered patches of cloudiness in the nickel finish, most notable on the hammer spur and the bottom of the barrel at the ejector tab. There are a few scattered light nicks and scuffs with some minor swirling in the finish. There is a spot of erosion on the inside of the frame below the cylinder with a corresponding spot on the cylinder between two of the flutes. Someone attempted to scrub the erosion on the cylinder with a patch of missing finish surrounding it. The cylinder has a faint turn-line. The screw heads are sharp. The markings are clear. Overall, this revolver is in about Very Good-Fine condition, but will appear Fine-plus in its display case with the cylinder turned to the proper orientation.

Mechanics: The action functions correctly. The cylinder lockup shows barely perceptible play. The trigger pull is crisp. We did not fire this revolver. As with all used firearms, a thorough cleaning may be necessary to meet your maintenance standards.

Box, Paperwork & Accessories: This revolver comes in a display case with a hinged lid over a glass pane, and the revolver is contained in a fitted drawer. Included is an assortment of factory paperwork including manual and yellow “stop-sign” hang-tag, a key for the drawer and six “silver bullets”.

Our Assessment: The Colt Single Action Army handgun is a single action revolver designed for the US government service revolver trials of 1873 by Colt’s Manufacturing Company and adopted as the standard military service revolver until 1892. Although the SAA has been offered in over 30 different calibers and various barrel lengths, its overall appearance has remained consistent since 1873. Colt has discontinued its production twice, but brought it back due to excessive demand. The Colt Buntline Special is a long-barreled variant of the Colt Single Action Army revolver, which Stuart N. Lake described in his best-selling but largely fictionalized 1931 biography “Wyatt Earp: Frontier Marshal”. According to Lake, the dime novelist Ned Buntline commissioned the production of six Buntline Specials equipped with 12” barrels and presented them to five lawmen as well as to Buffalo Bill Cody in thanks for their help in contributing local color to his western yarns. Two of the recipients were supposed to be Wyatt Earp and Bat Masterson, but there is no record of them ever owning such handguns. That didn’t stop Hollywood from equipping Hugh O’Brian with a Buntline Special when he played Wyatt Earp in the TV series “The Life and Legend of Wyatt Earp”. The Buntline Special was never made by Colt as a standard model, but they did make short runs of 2nd and 3rd Generation “Buntline Specials” as well as a “New Frontier Buntline Special” with adjustable sights. This is a Colt New Frontier Buntline Special made in 1979 as one of only 3,000 such revolvers made to commemorate Ned Buntline. The revolver is in about Very Good-Fine condition with 95% of its finish remaining. The bore is bright with sharp rifling and no erosion. There are spots of erosion inside the frame and on the cylinder, but they won’t show when displayed in the case. All of the Colt SAA revolvers are collectable, but this Ned Buntline commemorative is scarce and attractive, a great addition for any collection. Please see our photos and good luck!