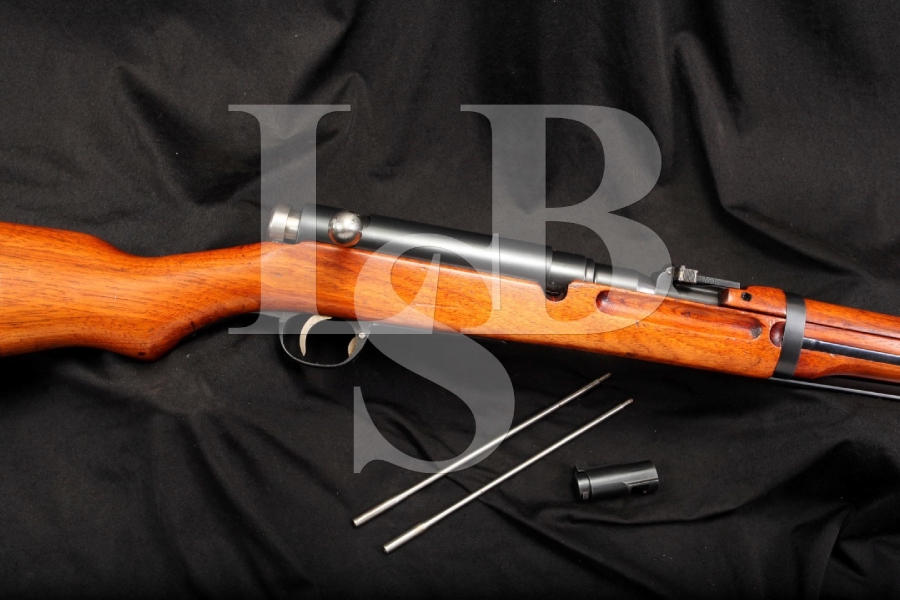 SOLD FOR:$1,730
Make: Tokyo Artillery Arsenal
Model: Type 44 Carbine
Serial Number: 25884
Year of Manufacture: 1911 – 1929
Caliber: 6.5 X 50mm (6.5 Jap or 6.5 Arisaka)
Action Type: Bolt Action with Internal Magazine
Markings: There is no visible import mark. The top, front of the receiver is marked with the Imperial ownership seal, a “chrysanthemum” and three Japanese characters that translate to “44 Type”. The top, rear of the receiver is marked with a “circle” and a “triangle in a circle”. The left side of the receiver is marked (from left to right) with the serial number, the symbol for “Tokyo Artillery Arsenal” and with two unknown Japanese marks. The left side of the barrel shank is marked with a “B” and a “triangle in a circle”. The underside of the bolt handle is marked “5884”. The rear of the safety is covered in decorative metal work. The underside of the nose cap is marked with three Japanese characters and “995”. The bayonet release button is marked “9664”. The top of the bolt release lever is marked with a Japanese character and “995”; you have to pull the lever out to see the numbers. The underside of the butt is stamped with two small, square Japanese characters.
Barrel Length: Approximately 25 ½”
Sights / Optics: The front sight is a dovetailed set, inverted “V” post set between two protective ears. The rear sight is a “V” notched blade attached to a flip up sight ladder with a sliding “V” notch. It is marked from “5 – 20”.
Stock Configuration & Condition: The stock is a two piece, gloss finished, hardwood with a pistol grip, finger grooves, cutout for the folding bayonet, metal nose cap, metal barrel band, two sling loops and a metal buttplate. There is a lever on the right of the butt that rotates to open an oval in the buttplate. This exposes the cleaning rod that is kept in the buttplate. The stock has compression marks throughout. There are light scrapes on the stock. The underside of the butt has several deep scratches. There are no cracks. The LOP measures 13 ¼” from the front of the trigger to the back of the buttplate. The stock rates in about Very Good overall condition.
Type of Finish: Blue
Finish Originality: Original
Bore Condition: The bore is semi-bright and the rifling is defined. There is light erosion present.
Overall Condition: This rifle retains about 98% of its metal finish. The bolt cover, magazine plate and bolt release lever show light marks. The screw heads are intact. The markings are deep. Overall, this rifle rates in about Fine condition.
Mechanics: The action functions correctly. We have not fired this rifle.
Box, Paperwork& Accessories: This rifle comes with an unmarked muzzle cap. It is in about Excellent condition.
Our Assessment: This Japanese Type 44 carbine is a beautiful example of the work done at the Tokyo Artillery Arsenal. This one is intact. It comes with a muzzle cap, folding bayonet and even has a compartment in the butt for the cleaning rod. The lever on the right of the butt is rotated down to open the oval in the buttplate and expose the rod. These were made at the Tokyo arsenal from 1911 to 1929. They were then made by the Kokura and Nagoya Arsenals. The folding bayonet looks very impressive when it is extended. It is surprising that the rifle is in such Fine condition. Its mum and Japanese characters are Excellent. For more see page 208 of Joe Puleo’s: “Bolt Action Military Rifles Of the World”.