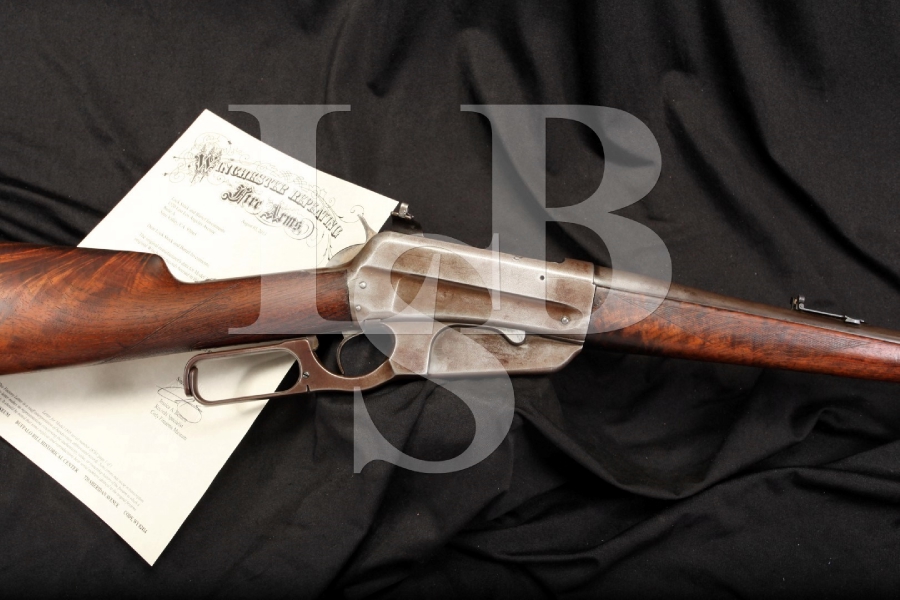 SOLD FOR: $3,300
Make: Winchester
Model: 1895 Deluxe
Serial Number: 28763
Year of Manufacture: 1900 (Proof House)
Caliber: .30-40 Krag (.30 US)
Action Type: Lever Action with Internal Box Magazine
Markings: The left side of the barrel is marked “Nickel Steel Barrel / Especially For Smokeless Powder”. The top of the barrel at the receiver is marked “30 U.S.” The left side of the receiver is marked “Manufactured By The Winchester Repeating Arms Co. New Haven, Conn. U.S.A. / Patented Nov.5.95.NOV.12.95.AUG.17.97.Jan.25.98.Aug.23.98.Aug.6.1907.” The top tang is marked “Winchester / Model 1895.” The bottom tang is marked “28763”. The butt under the buttplate is marked “95” and what we believe to be an assembly number “10400”. The inside of the buttplate is also marked with a matching assembly number.
Barrel Length: 27 ¾”
Sights / Optics: The front sight is a beaded blade pinned to a slotted base on the barrel. The rear sight is a folding “V” notch sight dovetailed into the barrel. It has a fine elevation adjustment and a white diamond aiming point on the rear face. It is marked “Marble’s / Gladstone / Mich. U.S.A.” There is also an aperture sight mounted on the left side of the receiver that is adjustable for windage and elevation. It is marked with a picture of a running deer as seen through rifle sights and “Lyman’s Pat. JUNE 25. 95”. The aperture is fairly large and good for running game, and has a flip-up smaller aperture for distant targets or target shooting.
Stock Configuration & Condition: The stocks are fancy checkered walnut with a straight grip, a Schnabel tipped forend with a black tip inlet into the wood and a blued steel crescent buttplate. The wood has a beautiful grain, so please see our pictures! The wood shows oil staining at the receiver. The forend shows handling marks with a few deeper compressions on the underside near the receiver, a scratch on the underside behind the checkering and a scratch on the left side in front of the checkering. The buttstock shows handling marks with three or four compression marks on each side, multiple marks at the toe, and a crack through the wood at both sides of the toe. There is also a repaired crack in the wrist at the left lower corner at the receiver, cracks on both sides of the wrist at the rear of the upper tang, and a chip out of the right front edge at the receiver. There are also repaired cracks in the wrist area that can only be seen when the stock is removed. The checkering is heavily worn and completely smooth in spots. The LOP measures 13 3/16” from the front of the trigger to the back of the buttplate, which shows surface loss, scratches, and a few compression marks. The buttplate is in about Good condition. The stocks rate in about Good overall condition.
Type of Finish: Blue
Finish Originality: All Original
Bore Condition: The bore is dark and the rifling is shallow. There are a few small spots of very light erosion near the muzzle. Our bore gauge measures a ME of 3.0.
Overall Condition: This rifle retains about 50% of its metal finish. Much of the finish shows surface loss/thinning and a brown patina has formed. The front edge of the barrel shows surface loss and the rest shows small compression marks on the first 8” of the barrel from the muzzle back. The barrel also shows light pitting under the patina and tiny compression marks around the rear sight base. The receiver shows frosting and a few compression and handling marks with pitting on the lower left side. There are also deep compression marks on the top right edge of the port opening and the top of the bolt shows pinprick surface erosion. The aperture sight base shows pitting and pinprick surface erosion. The hammer checkering shows light wear. Three of the screws on the left side of the receiver are sharp, two are disfigured and the aperture sight elevation lever screw is badly disfigured. Two of the four tang screws are sharp and the other two disfigured. The markings are clear. Overall, this rifle rates in about Very Good condition, and would be higher except for the condition of the wood and the deep compression marks on the right edge of the port.
Mechanics: The action functions correctly. We have not fired this rifle.
Box, Paperwork & Accessories: This rifle comes with a letter from the Cody Firearms Museum stating that this rifle was built with a fancy checkered stock and received in the warehouse on November 30, 1900.
Our Assessment: The 1895 Winchester was their first model to incorporate a non-detachable box magazine. This is the model Teddy Roosevelt called his “Big Medicine” and which he used in hunting here and in Africa. This rifle became the preference of major powers worldwide, with Russia alone purchasing nearly 300,000 1895’s just before World War I. The Model 1895 was designed for the new generation of cartridges utilizing smokeless powder and pointed bullets, and many of its original chamberings remain popular today. With its quick handling characteristics, box magazine and pointed bullet capability, the Model 1895 changed the world of sporting rifles forever. This is a Winchester Model 1895 Deluxe Rifle chambered in .30-40 Krag and in Very Good condition. It has a scalloped receiver, two-piece lever, Schnabel forearm and straight grip checkered stock with crescent buttplate. Most of the bluing has worn off the high nickel content receiver, and it has developed a light brown polished patina over the years. The barrel and receiver show handling and compression marks, with a few spots of pitting and pinprick surface erosion scattered around. The bore shows wear and very light erosion at the muzzle, but is still shootable. However, this rifle is sure to attract the attention of Winchester collectors and it is doubtful it will ever be used for deer or elk hunting again.