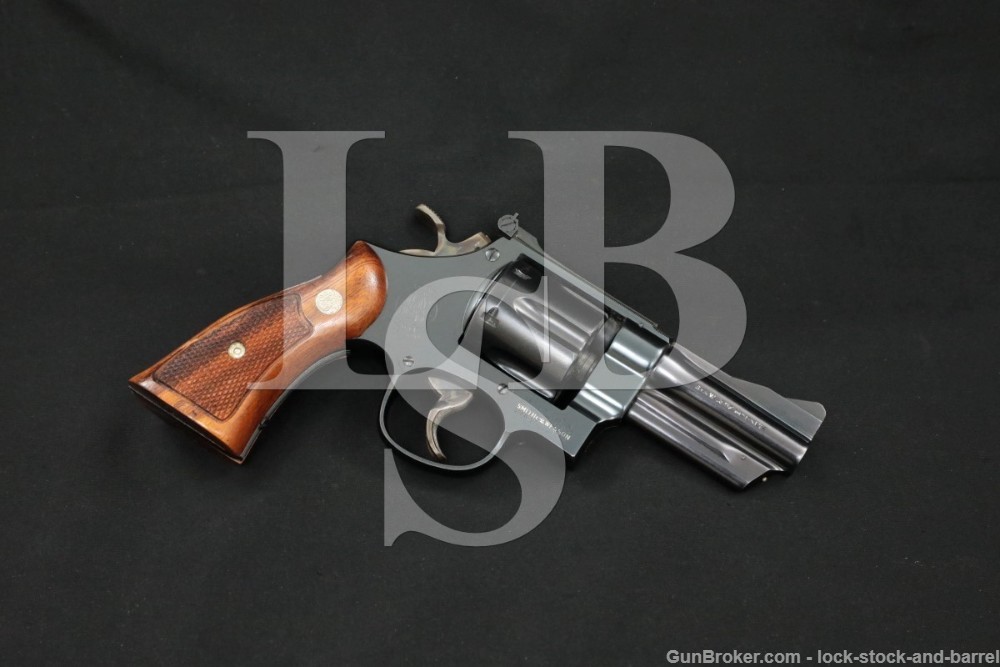 Sights / Optics: The front sight is a ramped serrated blade integral to a ramped base pinned to the barrel rib. The rear sight is a white-outlined S&W micrometer click square notch adjustable for windage and elevation. The barrel rib, ramp, rear sight tang and the topstrap are finely checkered to reduce glare.

Stock Configuration & Condition: The grips are two-piece checkered Goncalo Alves magna stocks. There are some little scuffs and scratches, the most noticeable are on the left panel at the top. There are a few little nicks and dings, the most noticeable are on the bottom face of the left panel and on the right panel up at the top. There is some wear to the rear edge that borders the checkering on the right panel. There are a few draglines and light handling marks. The checkering is sharp. Overall, the grips are in about Very Good-Fine condition as not original to the revolver.

Overall Condition: This handgun retains about 95% of its metal finish. There is some thinning on the edges of the muzzle and on the front edges of the underlug. There are a few little scuffs and light marks on the barrel and sides of the front sight base. There are some little nicks and scratches on the trigger guard. There are some little marks and a few spots of faint frost on the sideplate. There are some little tiny spots of finish loss on the left side of the frame but most look like they would be covered if you were to install target stocks. There is some thinning on some of the edges, most noticeable on the trigger guard. The cylinder has a few little scuffs and draglines. There is a light turn line on the cylinder. There is some thinning on the front edges of the cylinder. The screw heads are mostly sharp, the grip screw has light wear. The markings are clear, there are remains of white color fill on the marcas registradas and on the right side of the barrel. Overall, this revolver is in about Fine condition.

Mechanics: The action functions correctly. The cylinder lockup produces light side to side play on each chamber with the trigger depressed. The double action trigger is smooth, the single action crisp. We did not fire this handgun. As with all used firearms, a thorough cleaning may be necessary to meet your maintenance standards.

Our Assessment: This is a Smith & Wesson double action revolver made in 1954-1955. When first introduced by Smith & Wesson in 1935 it was known as the Registered Magnum and in 1939 Smith & Wesson changed the name to “The .357 Magnum”, and later the Model 27. It was noted for its durability and reliability and has been a favorite of shooters since its inception. The 3 ½” barrel length was extremely popular with FBI agents from the 1940s to the 1960s. General George Patton carried an ivory handled Registered Magnum with a 3 ½” barrel (along with his ivory handled Colt Peacemaker) Patton called the Model 27 his “killing gun”. This revolver is in Fine condition with some scattered light wear. This pre-Model 27 revolver looks good and should be a hit with the collectors. If it gets past the collectors, some lucky shooter will get a chance at one of the strongest double-action .357 Magnum revolvers ever made, built on S&W’s N frame, also used for the .44 Magnum. Please see our photos and good luck!