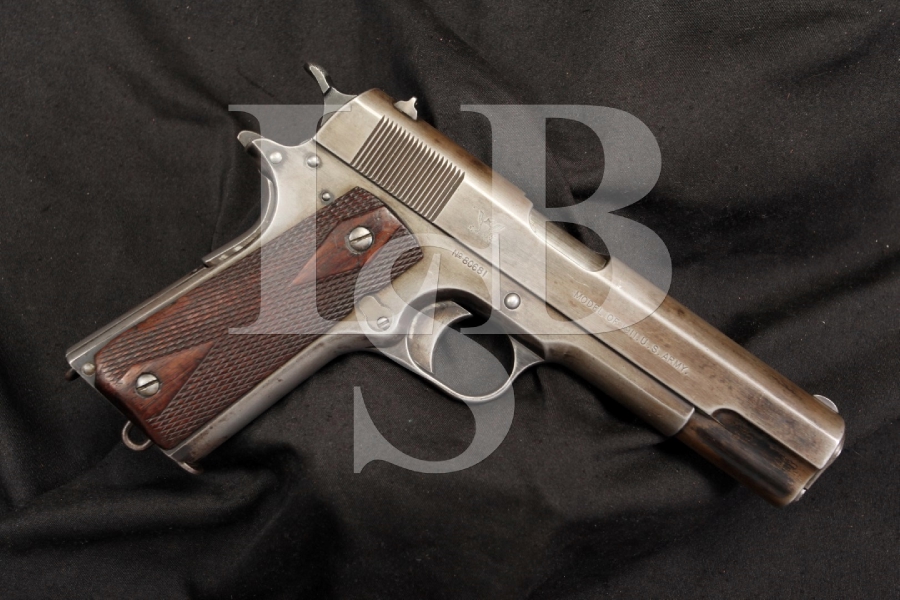 SOLD FOR: $3,750.01
Make: Springfield Armory
Model: 1911
Serial Number: 80681
Year of Manufacture: 1914 (Clawson)
Caliber: .45 ACP
Action Type: Single Action Semi-Automatic with Removable Magazine
Markings: The left side of the slide is marked “Patented Apr.20.1897 / Sept.9.1902. DEC.19.1905.Feb.14.1911 / Colts Pt.F/A/ Mfg. Co.”, “Springfield Armory / U.S.A.” and with a Flaming Bomb proof at the rear. The left of the frame is marked “UNITED STATES PROPERTY” and at the magazine release with a Flaming Bomb proof. The right side of the frame is marked “No 80681”. The right side of the slide is marked with an American Eagle Springfield logo and “Model of 1911. U.S. Army.” The barrel lug is marked “S” and “P”. The underside slide flat is marked “0”. The underside of the slide release and the firing pin retaining latch are marked “S”. There are no markings on the back side of the barrel bushing.
Barrel Length: 5”
Sights / Optics: This pistol is mounted with a thin rounded blade front sight fixed to the slide and a flat topped square notch rear sight dovetailed into the slide.
Stock Configuration & Condition: The grips are checkered walnut “Double Diamond” grips. Both grips show a few compression marks and there is a small chip out of the left grip at the top front corner. The right grip also has wear marks around the top grip screw. The checkering shows light to moderate wear on the left grip and moderate to heavy wear on the right. There are no cracks noted. The grips rate in about Very Good overall condition.
Type of Finish: The original finish was blue, but there is very little finish left.
Finish Originality: The finish is original.
Bore Condition: The bore is bright and the rifling is sharp. There is faint erosion in the grooves at the throat.
Overall Condition: This pistol retains about 15% of its metal finish. There is still finish left on the front of the slide, left side of the frame and the underside of the frame around the trigger. The rest of the surface is developing a light brown patina. There are a few new marks on the top of the slide and the right side of the frame above the trigger in addition to a few small scattered compression marks that have formed under the patina. The checkering on the hammer shows moderate wear while the safety checkering is sharp and the slide release checkering shows very minor wear. The grip screws are sharp but show marks of a screwdriver. The markings are clear. Overall, this pistol rates in about Good to Very Good condition.
Mechanics: The trigger pull is a little stiff, but it’s crisp. The slide is tight on the frame. The action functions correctly. We have not fired this pistol.
Box, Paperwork & Accessories: This pistol comes with one magazine that appears to be original and correct to the pistol. The top two thirds of the magazine shows surface loss and thinning, with light handing marks and a few spots of erosion. The baseplate has a lanyard ring and is secured in the magazine by having the edges of the magazine rolled over the side edges of the baseplate (found on Springfield manufactured magazines). The front edge of the baseplate and the lanyard ring show thinning. The magazine is in about Very Good condition. The pistol also comes with the original barrel. The barrel lug is marked “S” on the left side and the top rear edge of the barrel is marked “M”. The bore is grey, the rifling is shallow and there is light erosion in the grooves the length of the barrel. The barrel is in about Good condition.
Our Assessment: The 1911 and 1911-A1 pistols served the military of the United States from 1911 to 1985, through two World Wars and the Korean and Vietnam wars. They gained a reputation as a reliable handgun with plenty of stopping power and are held in high regard by those who have used them. This is a Springfield Armory Model 1911 made in 1914 and it (with its original barrel) is appropriately marked for a Springfield Armory pistol of that timeframe except that the rear of the barrel bushing had no marks. The barrel in the pistol and the original barrel both have Springfield Armory inspection marks, but the original barrel also is marked with an “M” on its top rear edge. The pistol is in Good to Very Good condition but has lost most of its original finish. The metal surfaces are forming a light brown patina that shows a few handling marks but are remarkably free of any erosion. This is a nice example of a WWI 1911 and should be of interest to 1911 collectors and collectors of WWI and WWII military arms. It offers an excellent entry point for the shooter interested in getting started collecting 1911’s and the nice action and bore will make this a great shooter that can always be used for home protection.