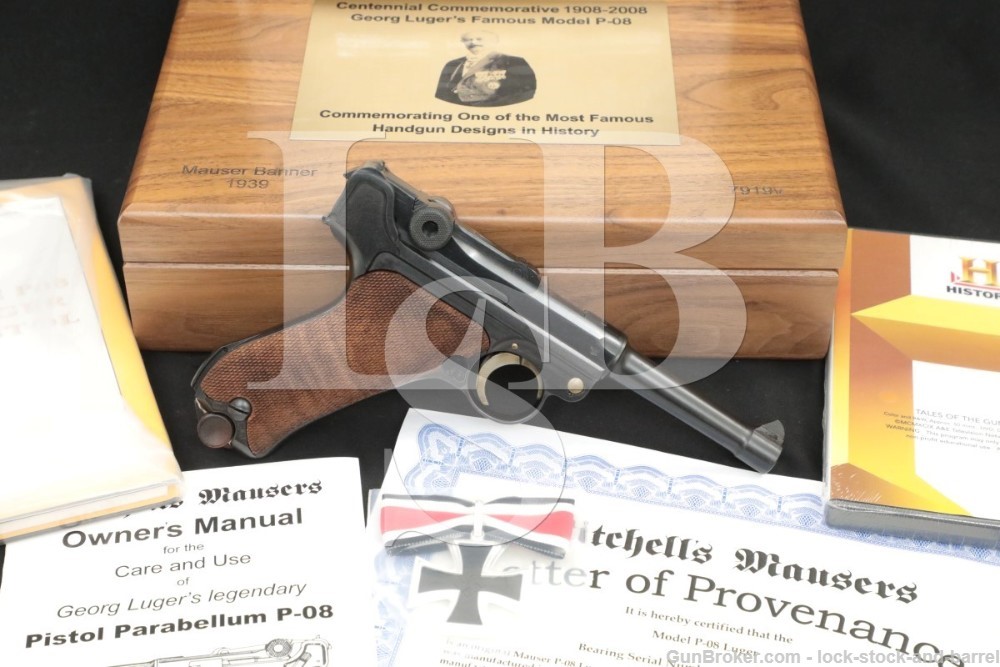 Stock Configuration & Condition: The grips are two-piece checkered walnut. The grips have no notable wear or damage, only light handling marks. The checkering is sharp. There are no chips or cracks. Overall, the grips are in Excellent condition as not original to the pistol.

Finish Originality: Refinished, some serialized parts have been force-matched.

Bore Condition: The bore is mostly bright with sharp rifling. There is infrequent minor erosion in the bore, mostly at the muzzle-end.

Overall Condition: This pistol retains about 97% of its current metal finish. The finish is generally strong throughout, with minor operational wear, most notable on the left in front of the sideplate. There is some scattered minor erosion under the finish. There are some scattered minor nicks and scratches, most under the finish. The screw heads are lightly tool marked with strong slots. The markings are generally clear, some of the inspection marks are shallow and incomplete. This pistol was modified with a sear-safety, but it has been removed. The sideplate retaining clip has been removed and the sideplate and sear assembly don’t appear to be compatible with a sear-safety. Overall, this pistol is in Good-plus condition as refinished.

Mechanics: The action works correctly. The barrel assembly has no play to the frame. We have not fired this pistol. As with all used firearms, a thorough cleaning may be necessary to meet your maintenance standards.

– One 8-round wood-floorplate magazine, force-matched to the pistol’s serial number.

– White cardboard box with serial number hand-written on the exterior.

– History Channel “Tales of the Gun: The Luger” DVD.

Our Assessment: The Luger (Pistole Parabellum) is perhaps the most aesthetically and ergonomically pleasing of all autoloading centerfire pistols. It is also one of the strongest, most accurate and most recognizable service pistols ever made. The Germans used a variety of markings on their guns, with different variations in use during the Imperial, Weimar, and Nazi eras, and more variations within between commercial, military and police pistols. This pistol has been assembled and restored by Mitchell’s Mausers. Its markings are generally consistent with the “Banner Police” Lugers, with a Mauser commercial banner logo on the front toggle, commercial proof marks on the bolt and barrel extension, and a police inspection marking on the right of the barrel extension. The barrel has an incomplete Mauser waffenamt, indicating that it came from a military-issued pistol, some serial markings have been force-matched and some of the markings may not be genuine. Mitchell’s did do a good job of the restoration, so the pistol looks great. Also included are a presentation case, a nice book on the P08 Luger as well as a DVD of the History Channel’s “Tales of the Gun” episode about the Luger. This makes for a nice collector’s item and it could also still make for a fun shooter. Please see our photos and good luck!