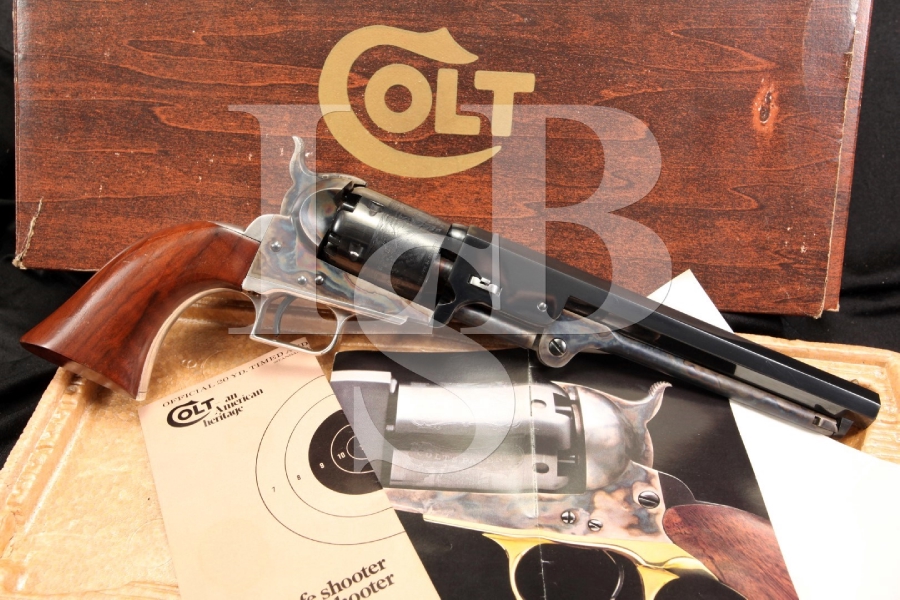 SOLD FOR: $1,000
Make: Colt
Model: 1851 Navy C Series
Serial Number: 18784
Year of Manufacture: 1971-1978 (ATF classified as Antique)
Caliber: .36 Caliber
Action Type: Single Action Cap and Ball Revolver
Markings: The top of the barrel is marked “ADDRESS SAML COLT NEW-YORK CITY”. The underside of the barrel assembly, trigger guard and frame are marked “18784”. The butt is marked “8784”. The left side of the frame is marked “COLTS / PATENT”. The cylinder is marked with a battle ship scene and “COLT’S PATENT NO 18784 / ENGRAVED BY W.J. ORMSBY NEW YORK”.
Barrel Length: 7 ½” Octagonal Barrel
Sights / Optics: The front sight is a mortise cone. The rear sight is a “V” notch in the hammer.
Stock Configuration & Condition: The grips are smooth walnut. There are light handling marks on the grips. The grips rate in about Fine overall condition.
Type of Finish: The barrel is a deep royal blue typical of the C series, with a case colored frame, hammer and loading rod. The trigger guard and grip frame section are silver plated brass.
Finish Originality: All Original
Bore Condition: The bore is Mirror bright and the rifling is Sharp and appears unfired. There is No erosion in the bore.
Overall Condition: This handgun retains about 98% of its metal finish. There is a faint dragline on the cylinder. The screw heads are Sharp. The markings are Clear. Overall, this handgun rates in about Excellent condition.
Mechanics: The action functions Correctly. We did not fire this handgun.
Box, Paperwork & Accessories: This revolver comes with its original wood grain cardboard Colt box and foam inserts. The box has handling and storage wear and rates in about Very Good overall condition. The authentic Colt Blackpowder Series pamphlet, Colt Handgun Handling Pamphlet and a Colt Industries Thank You For Purchasing letter from the company president are also included. The paperwork is in Fine condition.*UPDATE* The consignor has the American Rifleman from January 1979 and Shooting times from May 1977 that have articles related to this revolver. Both magazines are also included.
Our Assessment: This Colt Percussion Revolver was reintroduced in 1971. The 1851 came in both C and F series configurations The C series such as this one has a beautiful bright “Royal Blue” Finish with a Silver plated grip frame and trigger guard assembly and was made in the serial number range of “4201-25099”. This Revolver appears to be in unfired condition and would be an excellent collector’s item. This is one of the highly sought after second generation C Series which is still in its original box and was very well maintained and stored. The previous owner took very good care of this pistol and it will make the new owner very proud.