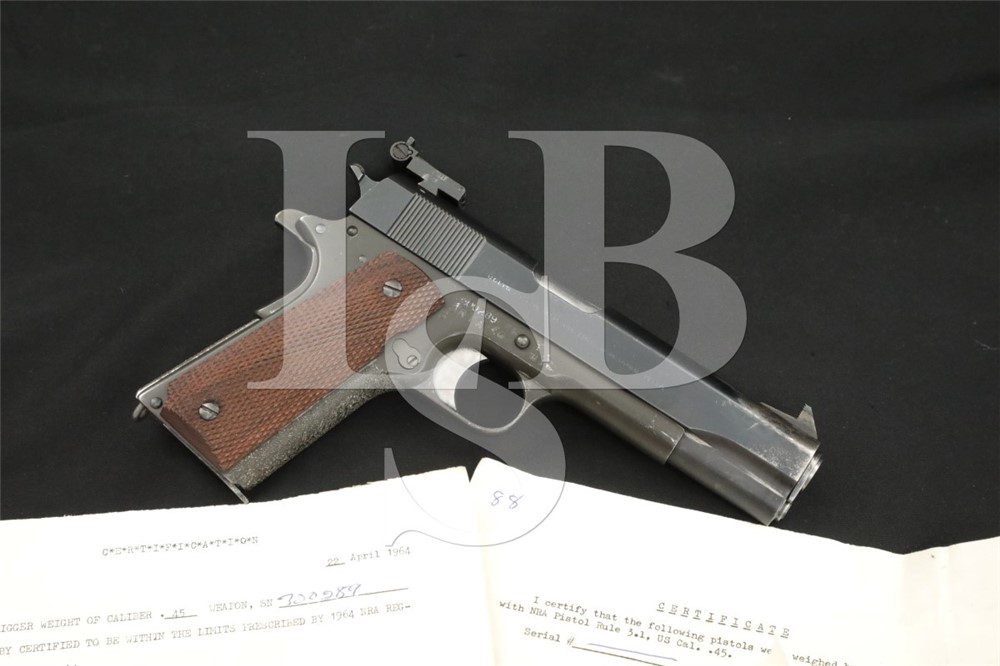 Sights / Optics: The front sight is a tall, serrated blade fixed to the front of the slide. The rear sight is a Triangle Mfg. square notch sight adjustable for windage and elevation, dovetailed to the rear of the slide.

Stock Configuration & Condition: The grips are two-piece checkered walnut. The grips have minor handling wear. The checkering is generally sharp. There are no chips or cracks. Overall, the grips are in Fine-Excellent condition as not original to the gun.

Overall Condition: This pistol retains about 85% of its current metal finish. The finish is thinning at all edges. The slide has some finish wear, mostly toward the top-front. The frame has handling wear in the grip areas. There are some scattered nicks, scuffs and scratches. The action shows operational wear. The screw heads are tool marked with strong slots. The markings are generally clear, some are worn and incomplete and some appear to be re-struck or not genuine. Overall, this pistol is in about Very Good condition as customized.

Mechanics: The action functions correctly. It has both a manual and grip safety and the trigger pull is crisp. The slide has barely perceptible play to the frame. We did not fire this pistol. As with all used firearms, a thorough cleaning may be necessary to meet your maintenance standards.

Our Assessment: The 1911 and 1911-A1 pistols served the military of the United States from 1911 to 1985, through two World Wars and the Korean and Vietnam wars. They gained a reputation as a reliable handgun with plenty of stopping power, and are held in high regard by those who have used them. They have also served as some of the best target pistols of the 20th century, and this is one example of a custom target 1911. The pistol was made with a National Match slide and barrel and WWI-era 1911 frame. Custom features include target sights, stippled frontstrap and mainspring housing, machine-turned trigger, and full-length guide-rod. The pistol came from a collection which included a number of accessories and documents of a Captain, later Major L.T. Zilisch, who appears to have been a regular shooter with the 5th and possibly 6th U.S. Army Pistol Team and Army Markskmanship Training Unit. The three certificates with this pistol were found clipped inside the shooting box which is included with item 90889969, another of Zilisch’s custom target 1911 pistols. This should still make for a great shooter. Please see our photos and good luck!