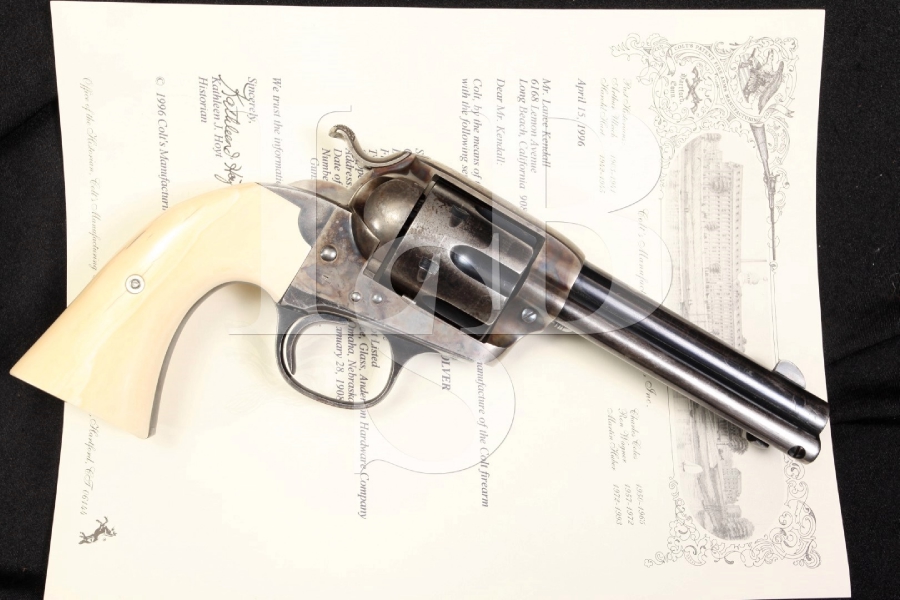 SOLD FOR: $3,100
Make: Colt
Model: Single Action Army, Bisley Model
Serial Number: 302012
Year of Manufacture: 1908
Caliber: .32-20 (32 WCF)
Action Type: Single Action Revolver with Side Loading-Gate Cylinder
Markings: The top of the barrel is marked “Colt’s Pt. F.A. Mfg. Co. / Hartford Ct. U.S.A.” The left side of the barrel is marked “(Bisley Model) 32 W.C.F.” The left side of the frame is marked “Pat. Sept. 18. 1871 / July2. 72. JAN. 19. 75.” and the Rampant Colt logo. The left side of the trigger guard is marked with the Verified Proof and a “6”. The frame, trigger guard and back strap are marked “302012”. The loading gate is marked “4168” which is not supposed to match the serial number. There is a cattle brand stamped on the right side of the frame. Our consignor states this was a Nebraska Brand, though we cannot find any evidence of this.
Barrel Length: 4 ¾”
Sights / Optics: The front sight is a fixed blade. The rear sight is “V”-notch in the top strap.
Stock Configuration & Condition: The grips are two piece smooth natural Tusk. The fit of these grips is great and there is natural grain and age evident in both panels. These are likely not factory panels, as the letter does no discuss them, but they are likely old and professionally fit. The panels are just a bit proud of the metal. The grips rate in about Excellent overall condition.
Type of Finish: Blue & Case Colored
Finish Originality: Factory Original
Bore Condition: The bore is almost bright and the rifling is generally sharp. There are only one or two spots of very light erosion in the bore. This bore is a solid 8+ out of 10.
Overall Condition: This handgun retains about 60% of its metal finish. There is the majority of the blue on the barrel and ejector rod housing, though these parts have thinned on the sides from holster wear. There are additional surface marks and scratches here, though no erosion. The cylinder and grip straps show a lot of original finish, with some thinning and some light mottling on one chamber. The frame shows a lot of case color and the only evidence of erosion is on the loading gate. This is an attractive and high condition old Colt. The screw heads are practically sharp, with fire blue remaining on the heads. The markings are clear. Overall, this handgun rates in about Fine condition.
Mechanics: The action functions correctly, with good timing and lock up and all four clicks are clear. We did not fire this handgun.
Box, Paperwork & Accessories: The gun comes with a 1996 Factory Letter, confirming all features and with the type of stocks “not listed”. Then gun was shipped in 1908 to Lee, Glass, Anderson Hardware Company in Omaha Nebraska, which is consistent with the account of the cattle brand being a Nebraska brand.
Our Assessment: Wikipedia has some good information on the Bisley Model: The Colt Bisley was introduced in 1894 as a target pistol. The name Bisley came from the famous firing range in Bisley, England. The Colt Bisley can be distinguished by the longer grip, the wider hammer spur, and the wider trigger. The distinguishing feature of the Bisley Target Model is the top strap, which is flat and fitted with a sliding rear sight, adjustable for windage only. The front sight is a removable blade, which fits into the slotted base attached to the barrel. The revolvers were supplied with different blades for elevation.
The Bisley mainspring is longer than the SAA mainspring, and the two are not interchangeable; it is attached to the hammer with a stirrup via a forked upper end. The serial numbers are stamped on the frame, the backstrap and the trigger-guard at the end of production, with tiny dies.
Bisleys were serial-numbered in the range of 156300–331916, in the same sequence as the Single Action Army. All Bisleys after No. 161,376 had “BISLEY MODEL” with the caliber stamped on the left side of the barrel, which is rare for older Colt revolvers.[12] The most common calibers were .32-20, .38-40, .45 Colt, .44-40, .41 Colt, and the British calibers .450 Eley and .455 Eley.[12] A total number of 44,350 were manufactured. Production of the Bisley was terminated in 1912, but serial No. 331916 was shipped after the First World War. Most Bisley Standard Model Revolvers which were shipped to a United States address were not used for target shooting but for self-defense because the grip and hammer were ideal for fast shooting.
This is a difficult to improve on Bisley Model Single Action Army that is largely untouched – save some very nice natural aftermarket tusk grips. The action is smooth, and this remains a First Generation Colt that you would be proud to display and would certainly add to any collection. The cattle brand certainly warrants more research.