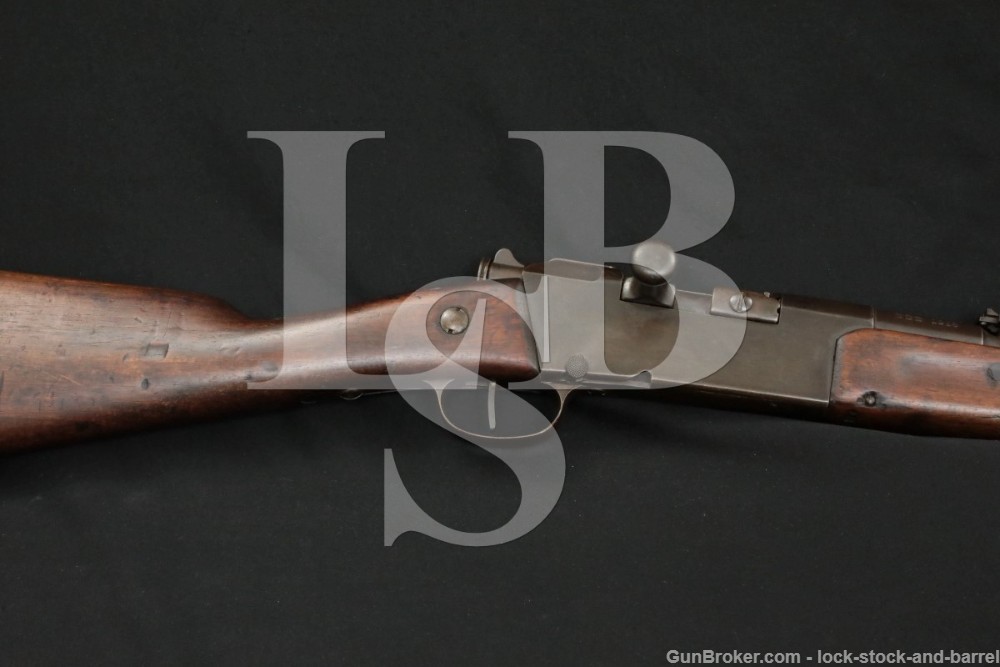 Sights / Optics: The front sight is a thick post atop a raised base. The rear sight is a “U” notched blade attached to a sight escalator when down. The left side of the rear sight base is marked from “4-8” for use with the escalator. When flipped up it becomes a sight ladder marked from “9-24”.

Stock Configuration & Condition: The two piece hardwood stock has a straight grip, finger grooves, nosecap with stacking rod, barrel band, two sling loops, through bolt and a metal butt plate. The buttplate & nosecap show surface erosion. The stock hardware shows scrapes and discoloration. The bottom of the stock shows a repair next to the barrel band. The wood shows numerous scrapes, scratches, and compression marks. Several have damaged small areas of the surface wood. These marks have been oiled over.  The LOP measures 13 ¼ inches from the front of the trigger to the back of the butt plate. The stock rates in about Good to Very Good overall condition.

Bore Condition: The bore is dark and the rifling is deep. There is erosion throughout the bore.

Mechanics: The action functions correctly. We have not fired this rifle. As with all previously owned firearms, a thorough cleaning may be necessary to meet your maintenance standards.
The magazine tube spring and follower are missing. The magazine tray and magazine cutoff function. This rifle was made without a safety.

Our Assessment: This French MLE 1886 M93 Infantry Rifle was made by Manufacture d’armes de Saint-Étienne (MAS) sometime between 1887 and 1920. It was eventually arsenal rebuilt and a 1916 dated barrel was added. This rifle has seen better days but should clean up a bit.