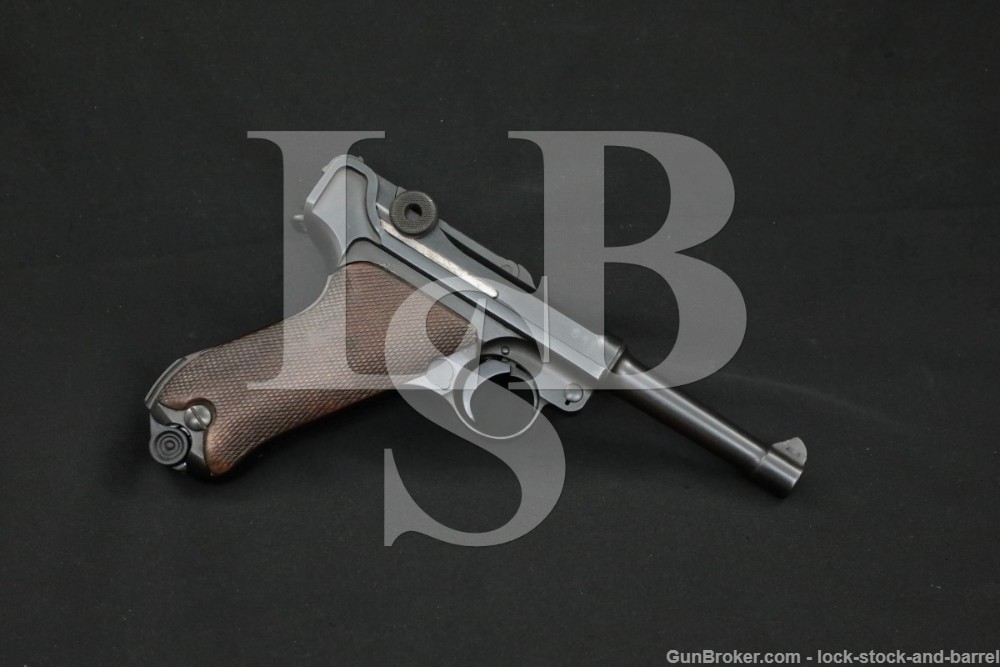 Stock Configuration & Condition: The grips are two-piece checkered walnut. The grips show handling wear with the checkering smoothed in some areas. The right panel has a chip-loss at the top-front. There are some light nicks and scuffs. The checkering is generally well defined. There are no cracks. Overall, the grips are in Good-plus condition.

Finish Originality: Refinished, some serialized parts may be force-matched.

Overall Condition: This pistol retains about 96% of its current metal finish. The finish is generally strong throughout, with thinning at some edges and some operational wear, most notable on the left in front of the sideplate. There is scattered light erosion under the finish. The screw heads are lightly tool marked with strong slots. The markings are generally clear, some of the inspection marks are shallow and incomplete. As with most Weimar-era police pistols, this pistol was modified with a sear-safety for the sideplate and with a magazine disconnect safety. The sear-safety has been removed and the magazine disconnect safety has been disabled. The takedown lever detent spring is missing. Overall, this pistol is in Good-plus condition as refinished.

Mechanics: The sear safety has been removed and the magazine disconnect safety has been disabled. The takedown lever detent spring is missing. Otherwise, the action works correctly. The barrel assembly has no play to the frame. We have not fired this pistol. As with all used firearms, a thorough cleaning may be necessary to meet your maintenance standards.

Box, Paperwork & Accessories: This pistol comes with a single Mec-Gar 8-round magazine.

Our Assessment: The Luger (Pistole Parabellum) is perhaps the most aesthetically and ergonomically pleasing of all autoloading centerfire pistols. It is also one of the strongest, most accurate and most recognizable service pistols ever made. The Germans used a variety of markings on their guns, with different variations in use during the Imperial, Weimar, and Nazi eras, and more variations within between commercial, military and police pistols. This pistol is a 1920 Police pistol, also referred to as a Dated Alphabet DWM Police pistol due to its 4 digit serial number with letter suffix and the 1920 Reichswehr date stamp on the receiver’s chamber ring. It has been refinished and some of its police features have been removed or deactivated. The pistol has a 4” barrel, is chambered in 9mm Parabellum, and has a Prussian Police Unit marking stamped on its front strap. This is an interesting piece of Luger history and would make a nice addition to a collection. It could also still make for a fun shooter. Please see our photos and good luck!