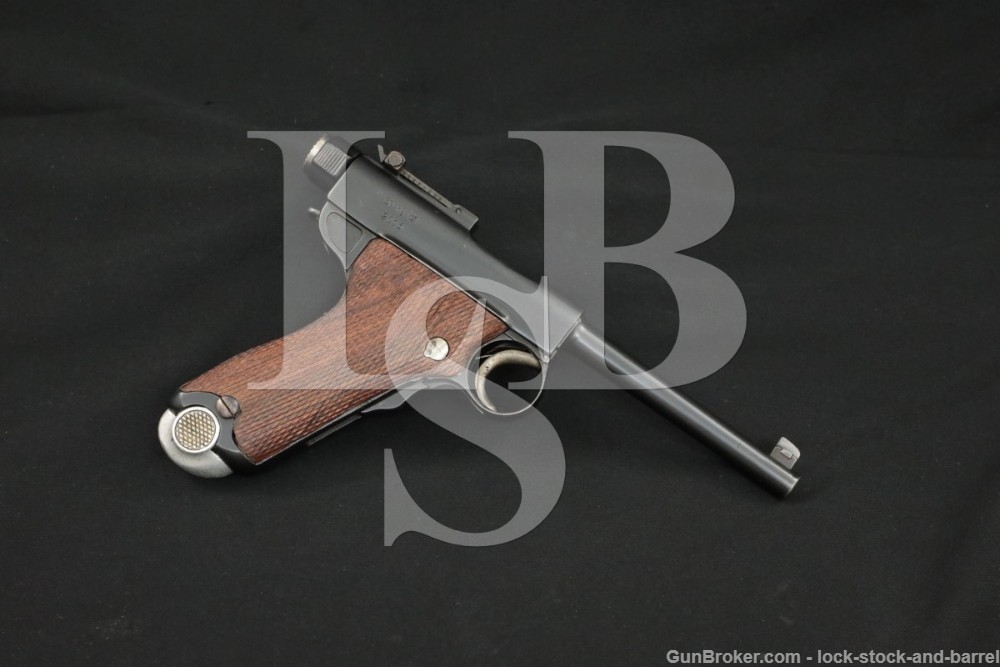 Markings: The right side of the frame has three Japanese characters for “Nambu Type” over the serial number “2091”. The serial number is also marked on the bottom of the barrel assembly’s front lug, the front face of the cocking knob, the firing pin, the magazine release assembly, the trigger guard assembly, the locking block, the replaceable engagement lug for the locking block on the bottom of the bolt, the ejector, and bolt. The inside of the left grip panel is marked “20 1”.

Sights / Optics: The front sight is a blade dovetailed into a base on the barrel. The rear sight is a “V”-notch tangent sight marked from 1-5 in hundreds of meters.

Stock Configuration & Condition: The grips are two-piece checkered wood. The grips have minor handling wear with a few light marks. There appears to be a small loss at the bottom of the right panel in front of the screw, but the fit is not perfect, so it may just be the shape of the panel. The checkering is well defined. There are no cracks. Overall, the grips are in Fine condition as not original to the gun.

Bore Condition: The bore is gray. The rifling is worn, but somewhat visible. There is light-moderate erosion throughout the bore.

Overall Condition: This handgun retains about 96% of its current metal finish. The finish is generally strong with thinning at a few edges and most finish wear in the strawed parts. There is some light erosion at the front of the recoil spring housing and guide. There is some scattered minor erosion under the finish. There is a more notable nick on the right of the barrel behind the front sight and another on the top-right where the barrel enters the frame. There is evidence of grinding under the finish at the bottom of the frontstrap (see Our Assessment). The threads for the right grip screw are partially stripped, only intermittenly engaging with the threads on the screw. The action shows light operational wear. The screw heads are lightly tool marked with strong slots. The markings are clear. Overall, this pistol is in about Good condition as refinished (see Mechanics).

Mechanics: The grip safety does not properly prevent the pistol from firing when not engaged. Otherwise, the action functions correctly. We did not fire this handgun. As with all used firearms, a thorough cleaning may be necessary to meet your maintenance standards.

– A single magazine is included, but it is not of the appropriate type for the “Grandpa Nambu”, appearing to be for the “Papa”. The magazine has had a notch cut for the magazine catch on this pistol, but it does not properly engage, being able to be pulled out of the pistol without depressing the magazine catch.

Our Assessment: This is a Type A Nambu, termed the “Grandpa Nambu” by American collectors. The pistol was designed by “The John Browning of Japan”, Kijiro Nambu. His name has become synonymous with Japanese handguns, having designed five pistols and eleven other small arms for the Japanese military. Shortly after being transferred to the Koshikawa factory in Tokyo, Nambu would be placed in charge of developing the nation’s first autoloading sidearm, and the Type A was the first in a line which would result in the widely issued Type 14. It is chambered for the 8mm Nambu, a bottleneck cartridge that pushes a 102 gr. bullet at a little over 900 fps and has approximately the same power as a .380 ACP cartridge. Unlike its prolifically produced descendent, production of the Type A was only about 2,400 pistols. The Japanese Army lacked the funds to officially adopt the new pistol, but did permit officers to purchase them personally for use as their sidearms. There were also many sold to Thailand. This pistol has serial matched parts, though the grips appear to be replacements, and fairly strong mechanics apart from the grip safety which is not functioning properly. There is an odd patch of grinding under the finish at the bottom of the fronstrap, where Thai markings may have previously been placed and since removed. This pistol’s serial number is noted in Derby & Brown’s book on Japanese military handguns as having been modified for use with “Papa” magazines and it does come with one, though it does not properly lock in the pistol. This scarce pistol will make a nice addition to a Japanese small arms collection. Please see our photos and good luck!