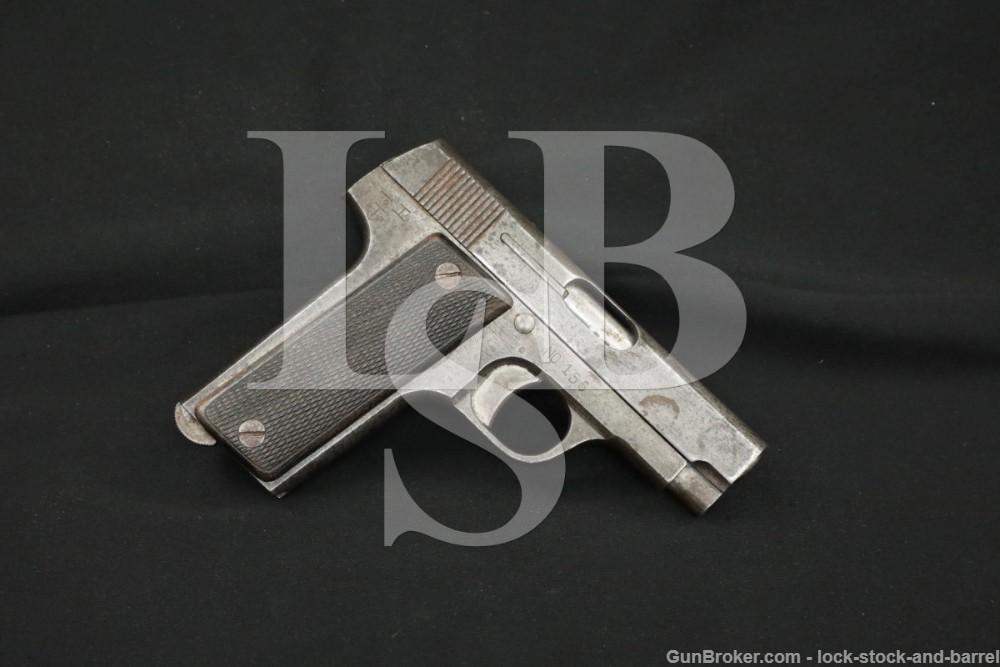 Make: Information on this pistol is quite limited. According to Derby & Brown’s “Japanese Military Cartridge Handguns 1893-1945”, there are different possibilities. The pistol could have been made by a Spanish firm and re-marked for the IJN, it could be a copy of the Spanish design produced by a Japanese firm or a factory in occupied China, and it is possible that they were produced by a Japanese Naval Arsenal.

Model: Typically referred to as a “Ruby”, Japanese Naval marked.

Stock Configuration & Condition: The grips are two-piece checkered wood panels. The grips have light handling wear with a few nicks and scrapes. The checkering is generally well defined. There are no chips or cracks. Overall, the grips are in Very Good condition.

Bore Condition: The lands are mostly bright, the grooves are gray. The rifling is sharp. The lands have infrequent minor erosion, the grooves show more notable erosion and some pitting.

Overall Condition: This handgun retains about 5% of its metal finish. Finish remains only in the interior of the slide and frame. The exposed surfaces are worn to white with scattered light erosion. There is a crack on the left of the slide at the top of the slide-stop notch, extending up and into the sight-groove on the top of the slide. The action shows operational wear. The screw heads are tool marked with strong slots. The markings are clear. Overall, this pistol is in Fair condition.

Mechanics: The action functions correctly, however there is a crack on the left of the slide at the top of the slide-stop notch, extending up and into the sight-groove on the top of the slide. Due to this crack, the pistol is not safe to fire. We did not fire this handgun. As with all used firearms, a thorough cleaning may be necessary to meet your maintenance requirements.

Our Assessment: The Ruby pistol was produced by as many as 45 Spanish companies and was copied by others. As such, there are a lot of them available with innumerable minor variations from example to example. This particular example is exceedingly rare with Japanese Naval markings. At the time Derby & Brown wrote their book on Japanese military handguns, they were aware of only two examples. This example is a third, but shares the markings of the examples noted in the book. The limited examples available, as well as the limited markings on the pistols, don’t give a lot to go on to determine the exact history of the pistols. It is not clear if they were made in Spain, China or Japan, and it is possible they were produced by a Japanese Naval Arsenal. This is a great opportunity for a Japanese arms collector, as there may only be a handful of these pistols still in circulation. Good luck and happy bidding!