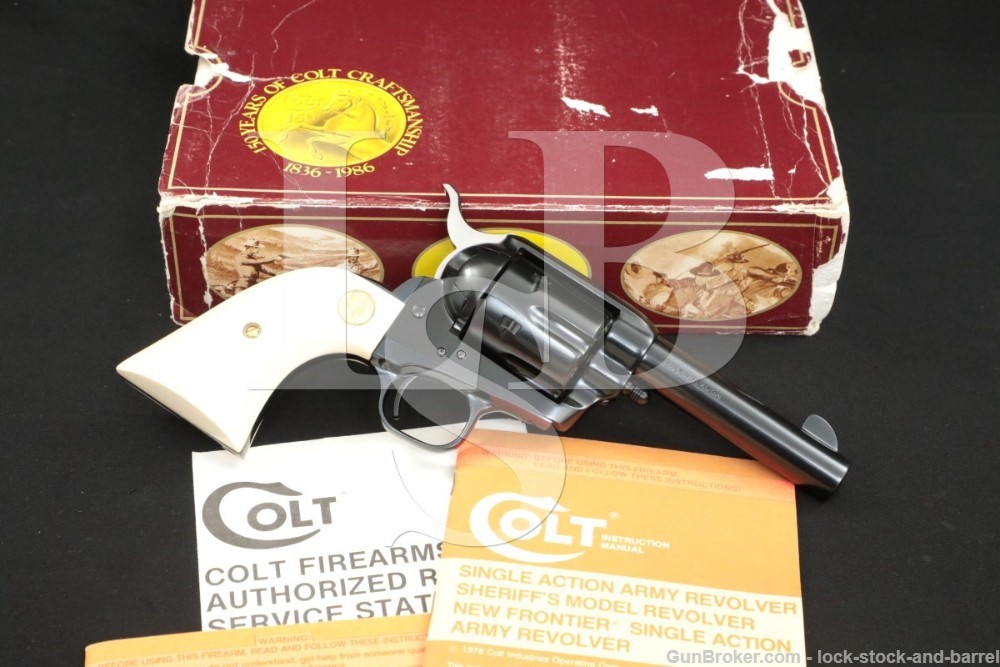 Sights / Optics: The front sight is a blade affixed to the barrel.  The rear sight is a groove cut into the top of the receiver.

Stock Configuration & Condition: The grips are two-piece bone with gold-colored Colt medallions.  The grips have no notable wear or damage, and they only have light discoloration, especially on the right plate.  There are no cracks or chips.  The grips rate in about Excellent overall condition.

Bore Condition: The bore is bright and the rifling is sharp.  There is no erosion in the bore.

Overall Condition: This handgun retains about 99% of its metal finish.  There are a few very little scratches in the finish. The most notable is the slight line in the cylinder from safe handling. The screw heads are sharp. The markings are sharp. Overall, this handgun rates in about Excellent condition.

Box, Paperwork & Accessories: This revolver comes with a box.  The box is white styrofoam and is marked on the top with a Colt log.    It also comes with several safety and instruction manuals.  This box comes in a maroon outer cardboard box.  The top of this outer box is marked with the 150th anniversary gold Colt logo.  Encircling this is yellow text reading “150 YEARS OF COLT CRAFTSMANSHIP” and “1836-1986”.  The front side of the box depicts two oval images of gunfighters using Colt firearms and an oval yellow label of reading “WARNING./AVOID ACCIDENTS/DO NOT CARRY THIS FIREARM/WITH A CARTRIDGE IN THE/FIRING CHAMBER/READ THE INSTRUCTION/MANUAL”.  On the other side is the same warning label and two pictures, but there is only a picture of one gunman on the right.  The left picture is of a factory.  Both boxes are in aged, used, and worn condition.  The foam insert has chunks taken out of it and the maroon box is missing the end flaps.

Our Assessment: The Colt SAA has been offered in over 30 different calibers and various barrel lengths. Its overall appearance has remained consistent since 1873. Colt has cancelled its production twice, but brought it back due to popular demand. The revolver was popular with ranchers, lawmen, and outlaws alike, but as of the early 21st century, models are mostly bought by collectors and re-enactors. Its design has influenced the production of numerous other models from other companies.  This is a rarely seen Storekeeper model with the classic old style Black Powder Frame. The bone grips and the dark blue finish makes a great looking revolver hardly seen and usually special ordered.