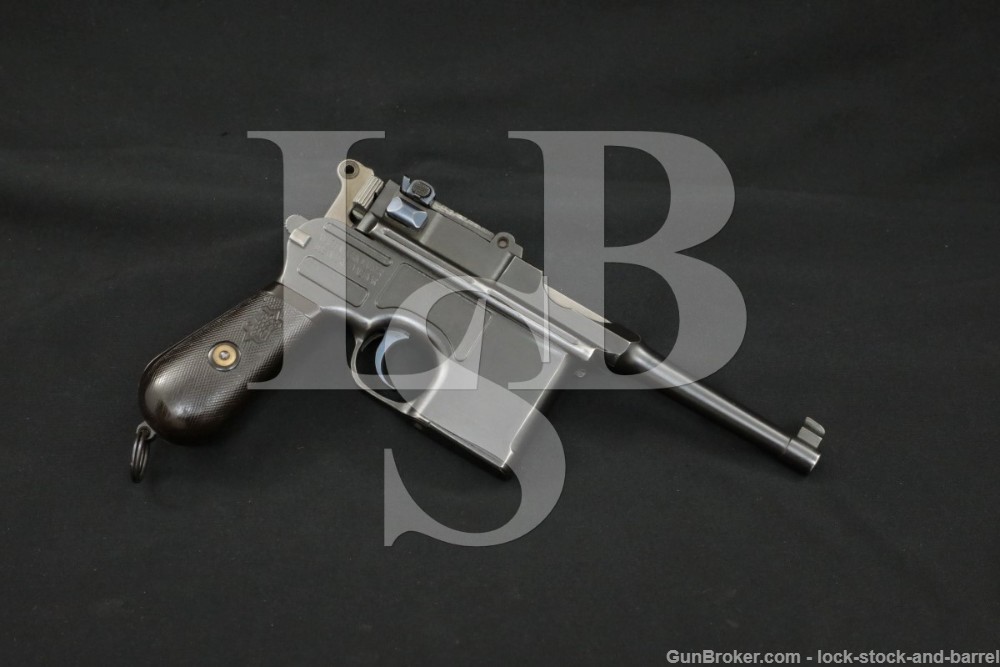 Stock Configuration & Condition: The grips are two-piece checkered black hard rubber with Mauser monogram logos at their tops. The grips show handling wear with a few areas worn smooth. There are some light nicks and scuffs. There are no chips or cracks. Overall, the grips are in Very Good condition.

Overall Condition: This pistol retains about 97% of its current metal finish. The finish is generally strong throughout with thinning at some edges, most notable on the edges of the barrel extension’s frame rails. The action has minor operational wear. There is some scattered minor erosion under the finish. The screw head is sharp. The markings are clear. Overall, this pistol is in about Fine condition as refinished.

Mechanics: The action functions correctly. We did not fire this pistol. As with all used firearms, a thorough cleaning may be necessary to meet your maintenance standards

Our Assessment: The Broomhandle Model 1896 Mauser is certainly an interesting looking firearm. Its features are the most distinctive of any other pistol. In addition to being popularized in Soviet films as the iconic weapon of the Russian revolution and civil war, it was even used as a basis for futuristic weapons like the blaster used by Han Solo in Star Wars. This pistol was made around 1922 and is part of a scarce French contract. It’s more than a little bit ironic that France would contract with a German arms company to produce sidearms for their Gendarmerie, not only because of what had happened a few years earlier, but also due to what would happen a few years later. It’s not clear that this pistol was ever issued to the Gendarmerie as there was an over-run of pistols produced for the contract. They are distinguished by being in the 430,000 to 434,000 serial range, having a “Germany” export marking, and most distinctively, by having a 4.9″ barrel. It has all serial matching parts and looks great due to being refinished. It even retains a nice bore! This pistol will make a great addition to a collection due to the scarcity of examples from this contract, but it’s also not that common to find C96 pistols with bores this nice, and it could be a fun shooter. Please see our photos and good luck!