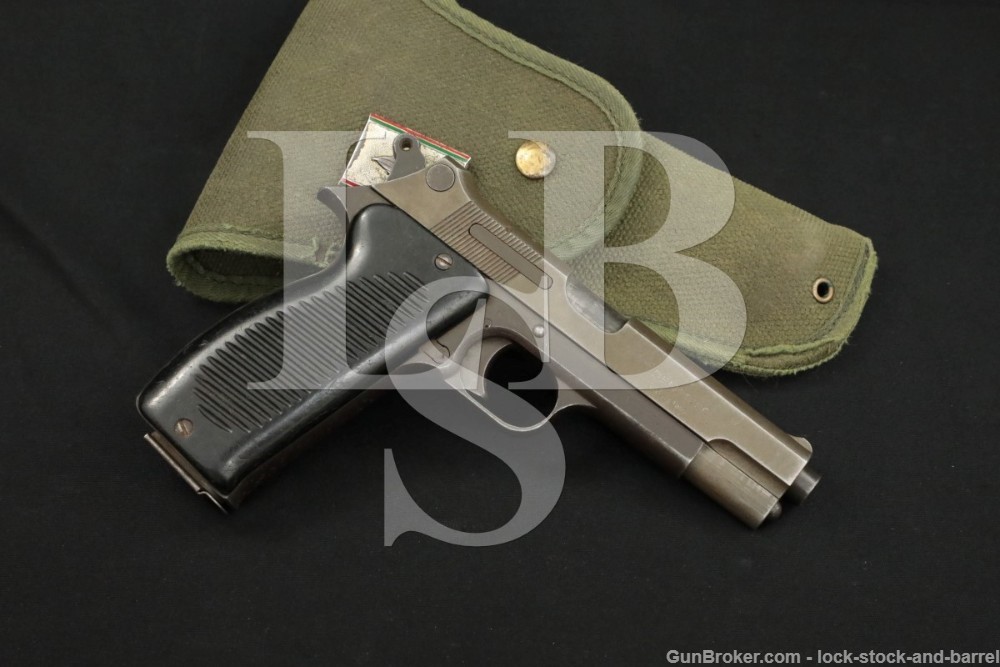 Year of Manufacture: 1953-1963 (The serial number indicates this example was manufactured midway through production of the first batch of 10,000 pistols, but a specific year is unavailable.)

Stock Configuration and Condition: The grips are two-piece serrated black polymer panels. The smooth areas on both panels have moderate nicks and scuffs throughout. There are no chips or cracks. Overall, the grips rate in Good-to-Very Good condition.

Type of Finish: Parkerized Gray, Barrel is Finished in the White

Bore Condition: The bore is gray but the rifling is well-defined. There is light erosion throughout as well as some minor stubborn fouling.

Overall Condition: This pistol retains about 84% of its metal finish. The slide has light thinning on most edges along with scattered minor nicks through the finish that are most notable along the top. The frame has light-to-moderate thinning on the front edges and there are scuffs and spots of light finish loss on the dust cover, frontstrap and backstrap, which also have intermittent spots of light surface oxidation. The grip screws range from lightly to heavily tool marked, but the slots are usable. Pins and controls are free of any notable wear or damage. Markings are generally clear. Overall, this pistol rates in Very Good-plus condition.

Mechanics: The action functions correctly. The slide has light play to the frame. We did not fire this pistol. As with all used firearms, thorough cleaning may be necessary to meet your maintenance standards.

Box, Paperwork, and Accessories: This Modèle 1950 includes the following:

Our Assessment: From Military Handguns of France 1858-1958: “On 30 October 1946, the French Army General Staff issued a directive that began a program for the development of a new type of semi-automatic pistol. [T]he French troops would have a modern and effective handgun, and the uniformity of a common weapon would be achieved.” Following this directive, several manufacturers were considered including Manufacture Nationale d’Armes de Saint Étienne (MAS), Societe Alsacienne de Constructions Mécaniques (SACM), and SIG. The designs were iterations of previous pistols like the M1935S and the M1935A. Ultimately, the chosen design from MAS incorporated elements of the Colt 1911 with the aforementioned pistols. While the MAS design was chosen, it would ultimately be Manufacture Nationale d’Armes de Châtellerault (MAC) that would start mass production with the first one hundred examples coming off the lines on 1 June 1953. This example is from the first batch of 10,000 produced—note the ‘A’ prefix—and is in overall Very Good-plus condition with wear that tells of consistent use. Regardless, this pistol will serve its new owner well as it is mechanically sound—and a great many of these pistols must be considering that as of a few years ago, it was still in limited service with French military and police forces. Good luck and happy bidding!