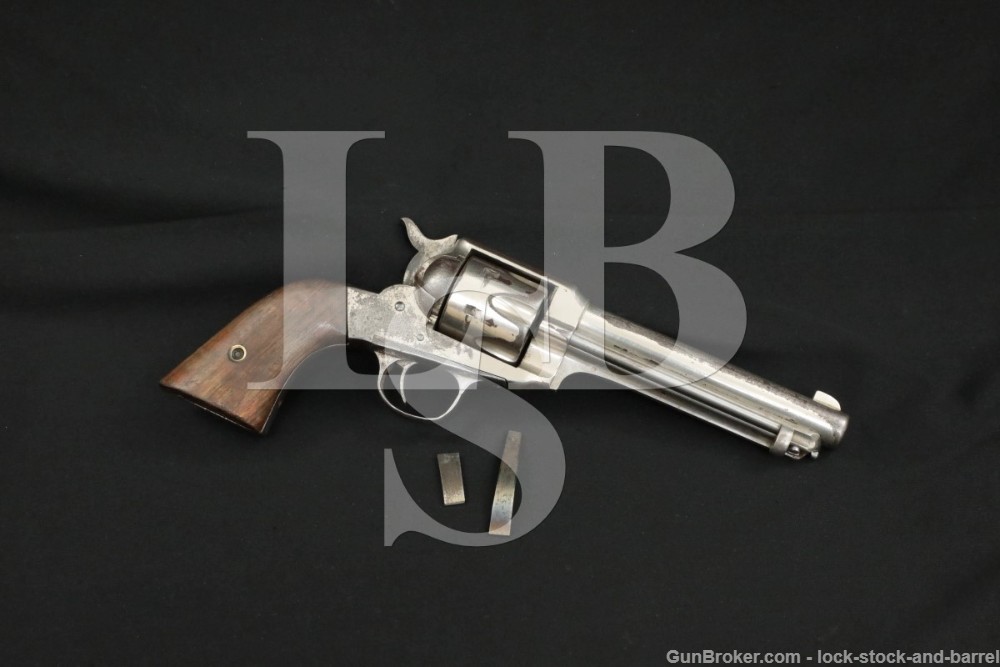 Sights / Optics: The front sight is a quarter-round blade fixed to the barrel. The rear sight is a square notch at the end of a groove in the top strap.

Stock Configuration & Condition: The grips are two-piece smooth wood. There are some scattered compressions, scuffs that have thinned the finish, and a few little dings. There is a small little crack on the bottom of the right panel at the indexing pinhole. The grips rate in about Very Good overall condition.

Bore Condition: The bore is dull with shallow rifling. There is scattered erosion and pitting. There is some epoxy at the muzzle and a little hole at the ejector housing screw.

Overall Condition: This handgun retains about 50% of its metal finish. There are areas of finish loss. There are areas of light surface oxidation. There are some spots of erosion, some of the most noticeable is on the trigger guard and on the left recoil shield. There are some little dings, scuffs, and scratches, some of the most noticeable are on the barrel. There is a turn line on the cylinder. The loading gate is loose. The screwheads are tool marked with serviceable slots. The markings are worn but visible. Overall, this revolver is in about Good condition.

Accessories: The mainspring is included, it looks like it can be repaired or used as a template for a replacement.

Our Assessment: The 1875 SAA was basically a cartridge version of the Remington 1858 New Model Army which was very popular during and after the Civil War for its sturdiness and ease of disassembly. Unfortunately for Remington, their production release was two years too late, and Colt had already established their 1873 SAA, with large orders from the Army and civilian populace. Remington would go on to update it to the 1890 but before then they had a transitional model 1888 which is this model. The model was made specifically for Hartley & Graham when they took control of Remington and were made from mostly left over parts. The revolver was identical to the 1890 and had the web of the 1875 style ejector rod housing modified and removed. They are a hot topic of debate for Remington collectors as so few were made and information is relatively scarce but this one has quite a few later features such as the rebated edge of the ejector housing at the frame, barrel address that reads muzzle-to-frame, and later trigger and trigger guard which would make sense for an 1888 made with later left over parts. The revolvers had batch numbers applied in addition to the serial number, this one has batch numbers on the barrel and frame. Some were made without lanyard rings and some were marked with the caliber like this one. This one is serial number 436 and all of the known examples are under 1000. The revolver never saw commercial success and not many of these were made making it a nice piece for collectors of Remingtons and Antiques. Please see our photos and good luck!