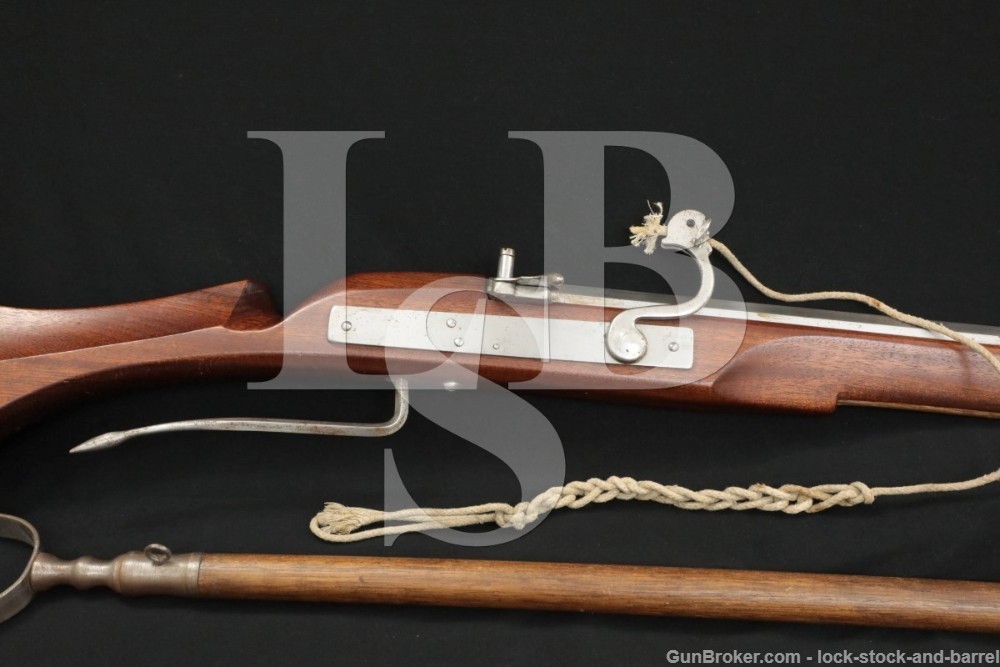 Year of Manufacture: This contemporary replica is ATF classified Antique

Markings: The left side of the barrel is marked with a crown shaped proof mark, “½ OZ BLACK POWDER” and “372”.

Barrel Length: 45”, Two-thirds of the barrel, from the muzzle down, are round and the bottom third is octagonal

Sights/ Optics: The front sight is a bead pinned at the muzzle. The rear sight is a “U”-notch at the rear end of the barrel.

Stock Configuration & Condition/ Grip: The stock is one-piece wood with fishtail style buttstock that has metal buttplate and the forearm has a barrel band to secure the ram rod and one before the muzzle. There are some light scratches, nicks and handling marks. Notably, there are a few scratches at the toe end of the butt and a black line, likely some sort of ink, in the center of the right side of the forearm. There are no chips or cracks. The buttplate has some handling marks and a few small patches of mild surface oxidation. Overall, the stock is in Fine condition.

Overall Condition: The rifle retains about 87% of its finish. There are scattered minor patches of surface oxidation on all the metallic components. Notably, the right side of the rear barrel band and  the pan cover’s knob have some larger patches. There are some scratches, nicks and handling marks. The markings remain clear. The screwheads are sharp. Overall, the rifle is in Very Good-plus condition.

Mechanics: The action functions correctly. We have not fired this rifle. As with all previously owned firearms, a thorough cleaning may be necessary to meet your maintenance standards

Box Paperwork and Accessories: There is a wooden ramrod, slow match for the firing mechanism and a fork-rest shooting stick. The ramrod has some handling marks and mild oxidation on the metal tip but remains in Very Good condition. The rest is 54” tall. It has a metal spike at its base and a metal horseshoe shaped holder at the top for placing the musket.  The metal top and bottom attachments have mild surface oxidation throughout. There are some minor nicks, scratches and handling marks. Overall the rest is in Very good condition. There is also a slow match included for firing the matchlock. It has some discoloration but remains well threaded and can be used in the field.

Our Assessment: This Matchlock rifle is a modern reproduction of the 16th century English firearm. It comes with a ramrod, slowmatch and mount. The rifle is reminiscent of the rifles that were used by European armies during the 16th century and could be used for reenactment purposes. The matchlock rifle would also be fun to take to the range. Goodluck on your bid!