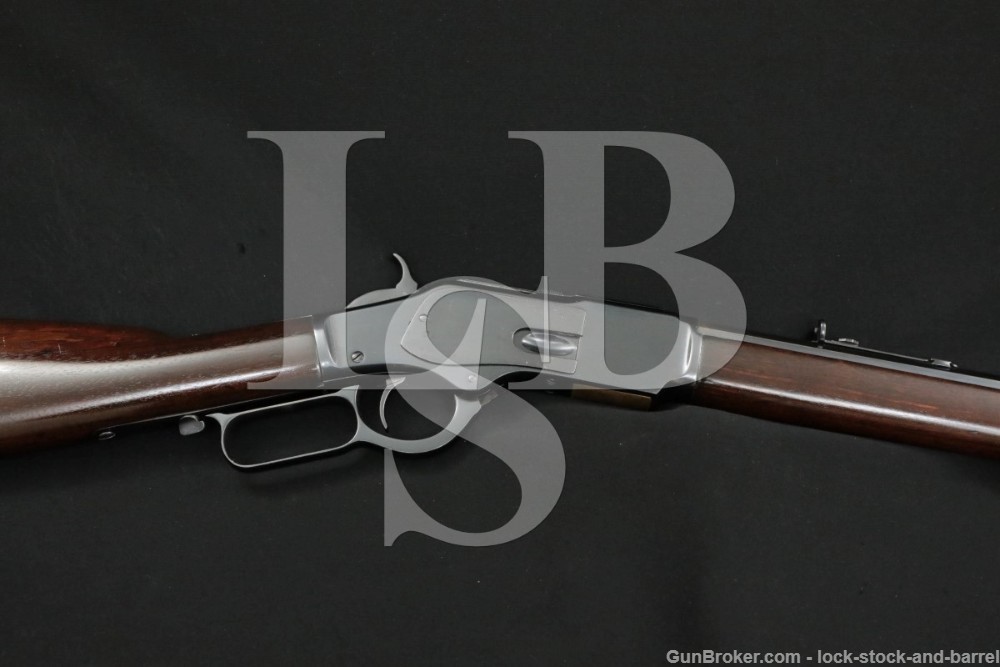 Sights / Optics: The front sight is a dovetail and screw set blade. The rear sight is a semi-buckhorn leaf and elevator sight, also set in a dovetail. The upper tang is drilled, tapped, and filled in two places for installation of an upper tang sight.

Stock Configuration & Condition: The stocks are two-piece smooth walnut with capped forend, straight grip, straight comb and steel crescent-style buttplate. The buttplate has a brass gate to a storage compartment in the buttstock. The stocks have a few light nicks, dings, and scratches. There are no chips or cracks. The LOP measures 12 7/8” from the front of the trigger to the back of the crescent buttplate, which shows some scraping at the heel and . Overall, the stocks are in about Fine condition as Antique.

Finish Originality: Refinished, the barrel has been remarked.

Bore Condition: The bore is dark and the rifling is pronounced but worn. There is a lot of erosion in the bore.

Overall Condition: This rifle retains about 85% of its metal finish. There is thinning at the leading edges of the barrel. There are a few older pits on the barrel. There is some light pitting under the refinish on the mag tube bracket. There are scattered light scratches on the sides of the receiver as well as older light pitting under the refinish.  The screw heads are sharp, the ones on the buttplate have light oxidation. The markings are clear. Overall, this rifle rates in about Very Good condition as Antique and refinished.

Our Assessment: “One of the most successful, and certainly one of the most famous Winchester rifles was the Winchester Model 1873, known as “The Gun that Won the West” for its predominant role in the hands of Western settlers. The Model 1873 had a steel frame that was much stronger than the brass framed Model 1866, allowing Winchester to develop a family of powerful new cartridges, with Colt usually producing Single Action Army revolvers in the same calibers shortly after they were developed…

This rifle retains about 85% of its metal refinish and is in about Very Good condition with a bright bore and solid mechanics. Though it has been refinished, it would still make an interesting addition to a collection.