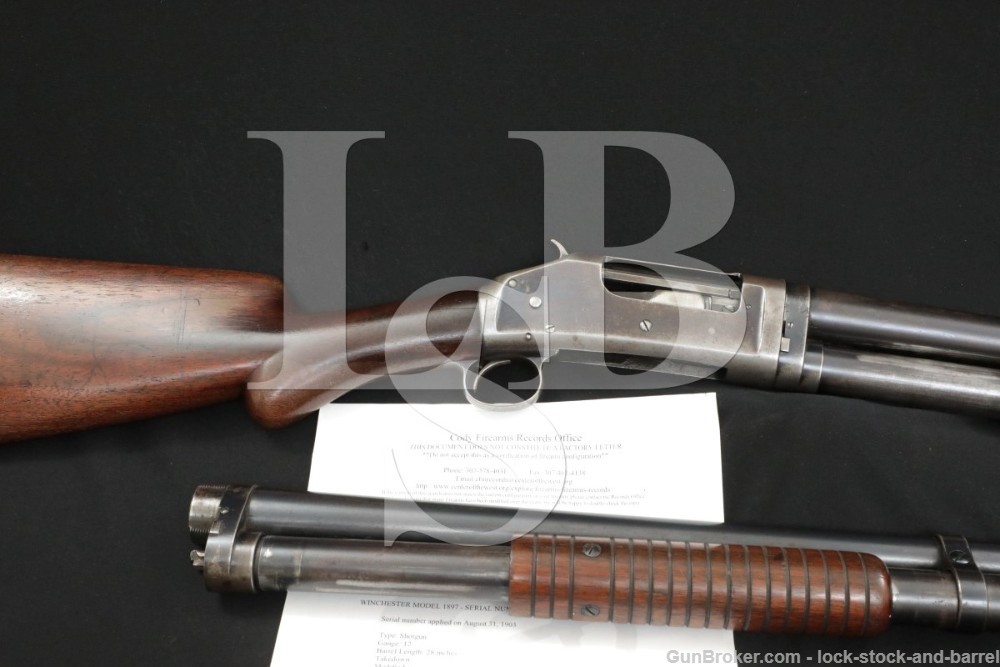 Choke: The 26″ barrel is Cylinder Bore, the 28″ is choked Modified, both are fixed.

Sights / Optics: There is a brass bead at the muzzle of each barrel. The top-front of the receiver has a groove which serves as a sighting plane.

Stock Configuration & Condition: The stocks are walnut with grooved slide handles, round-bottom semi-pistol grip, straight comb and smooth steel buttplate. Each slide handle has 14 grooves in front of their three mounting screws and three behind. The stocks have scattered nicks, dings, scuffs and scratches, most in the buttstock. There are thin cracks in each side of the wrist at the front edge. There are tiny losses at the heel and toe. The LOP measures 13 3/4″ from the front of the trigger to the back of the buttplate. The plate has wear and light erosion around the edges with some blue in the face mottled with light patina and some surface oxidation. The plate has some nicks and scratches. Overall, the stocks are in about Very Good condition.

Bore Condition: The 26″ barrel’s bore is mostly bright with infrequent minor erosion. The 28″ barrel has a semi-bright bore with some light erosion and minor pitting in front of the chamber, more notable erosion and pitting toward the muzzle-end.

Overall Condition: This shotgun set retains about 80% of its metal finish. The finish is thinning at all edges. The barrels have generally strong finish with some handling wear toward the rear of the 26″ barrel and erosion toward the muzzle-end of the 28″ barrel. The magazine tubes show wear from their brackets as well as operational wear from the slide. The slide handles show operational wear, a little more on the 28″ barrel assembly’s. The receiver has scattered wear with most remaining finish in the flats. The bolt and lifter still have fairly good finish. The action shows operational wear. There are some scattered nicks, scuffs, scratches and spots of minor surface oxidation. The screw heads range from sharp to tool marked with strong slots. The markings are clear. Overall, this shotgun set is in Very Good condition.

Mechanics: The action functions correctly. The trigger is crisp. This shotgun will slam-fire as designed. We did not fire this shotgun. As with all used firearms, a thorough cleaning may be necessary to meet your maintenance standards.

Our Assessment: The Winchester 1897 was designed by the famed John M. Browning and quickly became one of the most popular shotguns in the world, serving the United states military in both World Wars and popular with law enforcement agencies across the country. It should come as no surprise then, that it was also popular on the civilian market with many field guns produced. This example is a 12 Gauge set with a 28″ Modified choked barrel assembly and a Brush Gun configuration, having a 26″ Cylinder Bore barrel. The included Cody Firearms Records Search confirms that this shotgun had its serial number applied August 31, 1903, both barrel sets are original and shipped together on September 2, 1903. Being made this early, the set has early features including the three-screw forend assemblies and “dome”-style magazine caps. This is a handsome Winchester set, and factory-ordered multiple barrel sets are not common. It will add to any collection of Winchesters, 1897s or early repeating shotguns. Please see our photos and good luck!