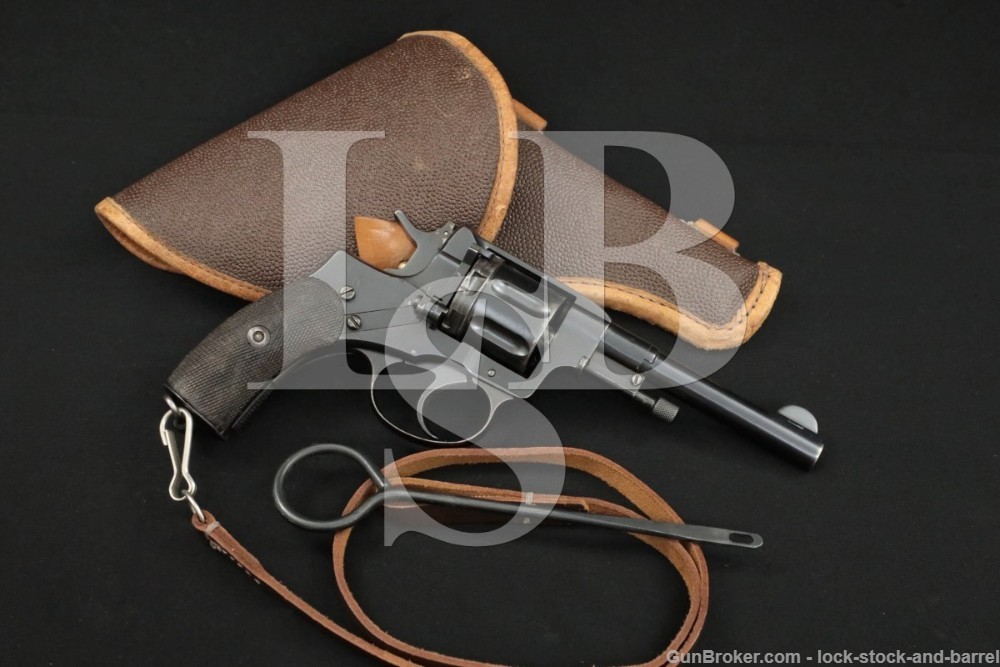 Sights/ Optics: The front sight is a dovetailed blade at the muzzle.  The rear sight is a square notch in the top strap of the frame.

Stock Configuration & Condition/ Grip: The grips are two piece dark checkered wood. The grips have some handling marks, scratches and nicks. The finish has worn off the grips in several patches. The checkering is dulled in a few points. There is a small chip on the bottom rear end of the left grip but there are no cracks. Overall the grips are in Good condition.

Overall Condition: The revolver retains about 93% of its finish. The hammer has a few spots of finish loss, the cylinder has lost finish on its leading edges, the muzzle and some of the leading edges on the frame also have some finish loss. There are some minor handling and storage marks. The markings remain clear. The screwheads have toolmarks but remain sharp. Overall, this revolver is in Fine condition with the worn grips being the main factor keeping it from being rated Excellent.

Mechanics: The Action functions correctly. As with all previously owned firearms, a thorough cleaning may be necessary to meet your maintenance standards.

Box Paperwork and Accessories: The revolver has an attached lanyard, cleaning rod and holster. The lanyard is attached to the loop at the base of the grip. It is made of leather with stitching that remains intact and the leather has only minor wear on the lanyard. Overall the lanyard is in Excellent condition. The Holster is made of rubberized canvas. The holster has some minor wear including handling marks, nicks and scratches. The stitching remains intact. Overall, the Holster is in Very Good condition.

Our Assessment: This Tula arsenal Nagant M1895 is a 7 shot single action revolver with fixed cylinder that takes 7.62x38mmR rounds. The Nagant M1895 had a long service life in Russia, it was originally produced by the Russian Empire and saw extensive use during WWI and the Russian Civil War. Following the establishment of the Soviet Union the revolver continued to see use through the end of WWII. This particular Nagant has markings which indicate it was manufactured in the Tula Armory in 1901,  including an Imperial seal. This Nagant is Single Action, production of which ceased in 1918 in favor of the double action variant. The pistol’s unique gas sealed design both prevents hand injuries that other revolvers caused from gasses escaping through a gap between the cylinder and barrel and increases the velocity of the bullet. You do not want to miss out on this revolver!