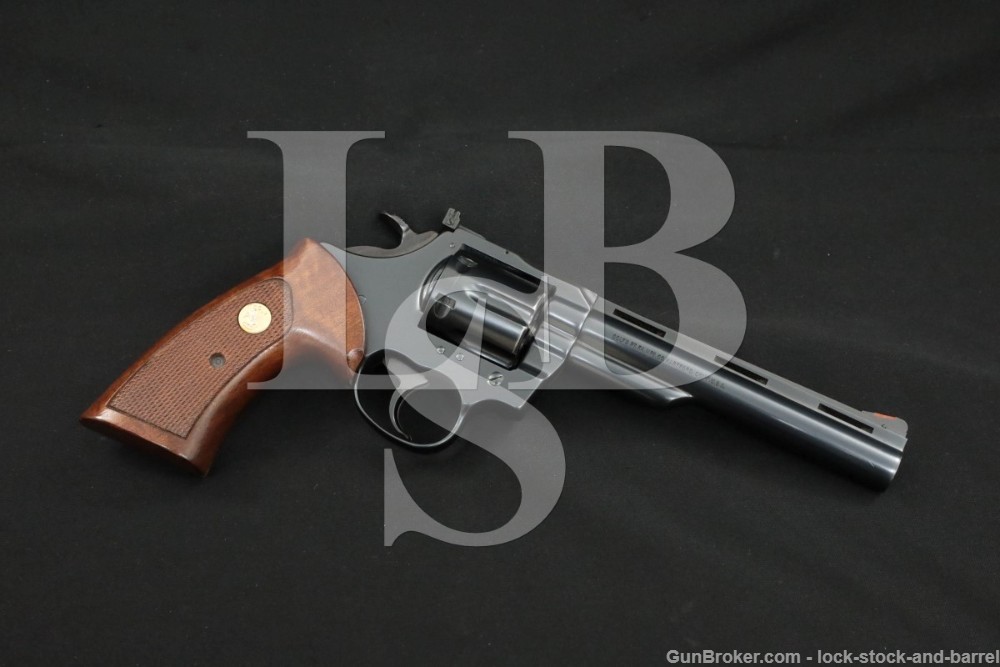 Sights / Optics: The front sight is a ramped blade with red insert fixed to the vent rib.  The rear sight is a square notch with white outline adjustable for windage and elevation.

Stock Configuration & Condition:  The grips are two-piece checkered wood with gold-colored Colt medallions.  The grips have no major wear or damage, only a few very light marks from storage and handling.  There are no cracks or chips.  The grips rate in about Excellent overall condition.

Bore Condition: The bore is bright and the rifling is sharp.  There is no erosion in the bore.

Overall Condition: This handgun retains about 97% of its metal finish.  There is some minor wear from previous use.  There are a few very light scratches on the left side of the frame. The cylinder has a faint drag line.  The screw heads are sharp. The markings are clear. Overall, this handgun rates in about Fine-Excellent condition.

Mechanics: The action functions correctly.  The star is sharp and the cylinder lockup is acceptable with light play. We did not fire this handgun. As with all used firearms, a thorough cleaning may be necessary to meet your maintenance requirements.

Our Assessment:  As with the MK III, the Mark V series was an entirely new product line of models which included Official Police, Lawman, and Trooper variants. The MK V series was based on a new, slightly smaller ‘V’ frame, similar in size to Smith & Wesson’s ‘K’ frame. Changes from the MK III models were minor and many parts remained identical. Internally, Colt did away with the sintered iron MK III lockwork in favor of cast parts, and improved the trigger action with new components and a shorter hammer fall. These improvements made the MK V triggers smoother, while the diminished lock times increased accuracy. Exterior modifications included a compact grip frame with rounded grips; other changes were engineering-based with the goal of simplifying and facilitating production.

Trooper: Options remained the same as they were with the MK III models, but the launch of the MK Vs denoted the initiation of a ventilated barrel rib option similar to the Python. The legacy solid rib remained available as well.