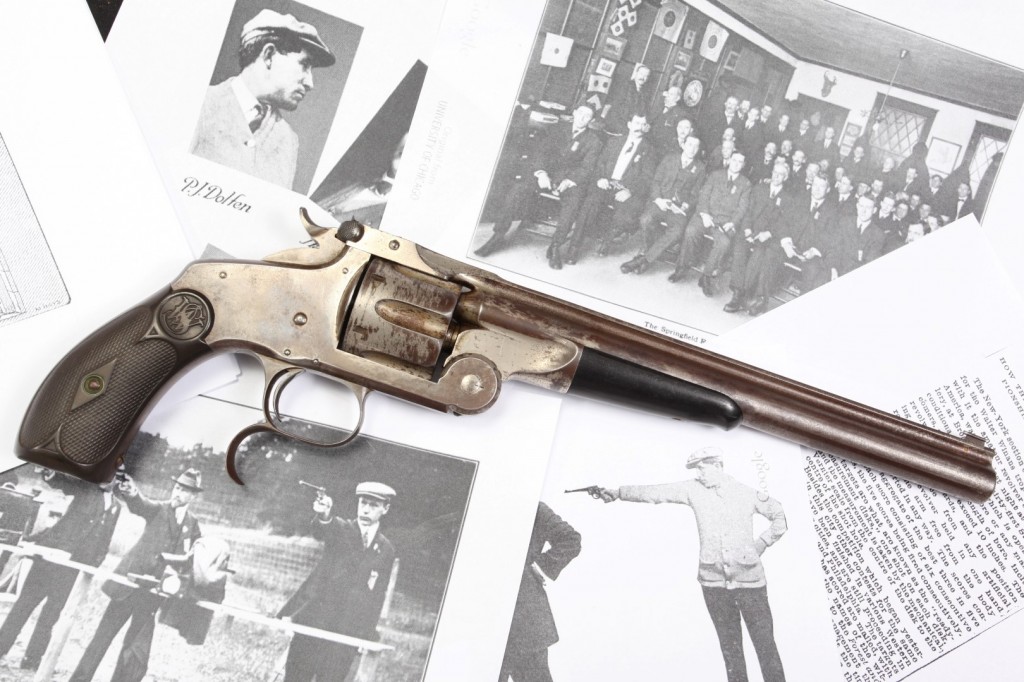 Sights / Optics: The front sight is a pinned, beaded blade that is designed to be replaceable with other front sights of different heights (none of which are provided.) The rear sight is a fixed “U” notched blade built into the top rear of the barrel latch. In addition there is the tiny and lower “U” shaped notch at the front of the barrel latch which is typical of S&W top-breaks.

Stock Configuration & Condition: The grips are checkered hard rubber that has turned brown. These grips have the S&W trade mark in a circle at the top and the diamond at the grip screw. The left panel has only light handling marks. The right grip panel also has light handling marks and a crack in the hard rubber at the grip escutcheon, “974” scratched into the inside, right below “1890” which has been scratched out. The forearm appears to be a smooth dark walnut with a few handling and compression marks on the exterior, a small chip at the left front and a crack at the escutcheon that is only visible from the inside. The grips rate in about Fine to Excellent overall condition for an antique firearm.

Bore Condition: The bore is half bright and the rifling is visible for the full length. There is some erosion and scattered mild pitting in the bore.

Overall Condition: This handgun retains about 15% of its metal finish. The nickel largely remains along the sides of the ejector housing, barrel extension and the protected area behind the recoil shield. The majority of the finish is now a brown patina with the exception being some erosion where moisture has been trapped by the forearm. The barrel rib has a notable compression mark about mid-way down the left side. The screw heads are surprisingly sharp. The markings are clear. The hammer and the face of the trigger are finely checkered; the trigger guard retains its spur. Overall, this handgun rates in about Good to Very Good condition as an antique.

Mechanics: The action functions correctly. The extractor works correctly. The seam where the two piece barrel is joined at the end of the ejector housing is visible under a magnifying glass. It is also possible to discern where a dovetail blank has been fitted starting about ½” in front of the barrel seam. These Revolving Rifles were normally offered in three lengths: 16”, 18” and 20” and were built on the New Model Number 3 action and frame. The barrel rib is slotted to make it possible to replace the pinned beaded blade front sight with sights of different heights. We did not fire this handgun.

Our Assessment: This is a unique S&W Model 320 Revolving Rifle. It displays a short forearm (roughly 2 ¾” rather than about 5”) that helps define it as a Revolving Rifle and this appears to be the original forearm.  The “rifle” does not have the notches required to secure a shoulder stock which would seem to be necessary to complete its description as a Revolving Rifle, though the lack of this feature is consistent with the shorter barrel. A close examination shows the seam where the two piece barrel used in the Revolving Rifle was joined. Just ahead of that is an expertly fitted blank used to fill in the dovetail where the rear sight is normally fitted on the Revolving Rifle. They were generally offered in three barrel lengths: 16”, 18” and 20”, though this appears to be the original length as the barrel address is centered – and being so late in production, it makes sense that this is a one-off gun.

We believe that the famous New York City shooting gallery – Conlin’s Gallery (which in 1900 was the meeting site where the United States Revolver Association was formed) had this custom made for them by Smith & Wesson. We think that it was intended to be used as a long barreled revolver and was made by S&W with the 9” barrel and replaceable front sight feature at the factory. We believe it was used by all the participants at an 1889 match held at Conlin’s Gallery and was then offered as a prize to the winner. The inscription “P. J. D. New-York 1889” refers to Peter James Dolfen, who would later go on to medal at the 1912 Olympics as a revolver shooter (Men’s Free Pistol at 50 Meters-Silver and Team Men’s Free Pistol at 50 Meters-Gold.)

“Ghost’s Double” refers to an event held at Conlin’s – Which PJ Dolfen won. This Revolving Rifle’s serial number 974; only three more were made when production was ended at serial number 977 in 1887. While we admittedly do not have a sample .320 S&W to verify the chambering, the .320 S&W was created for the Revolving Rifle and we believe all were chambered for that cartridge. This is truly a special and unique piece of Smith & Wesson’s history, as well as a testament to a time when revolver matches were a respected part of American life (even in New York City.)