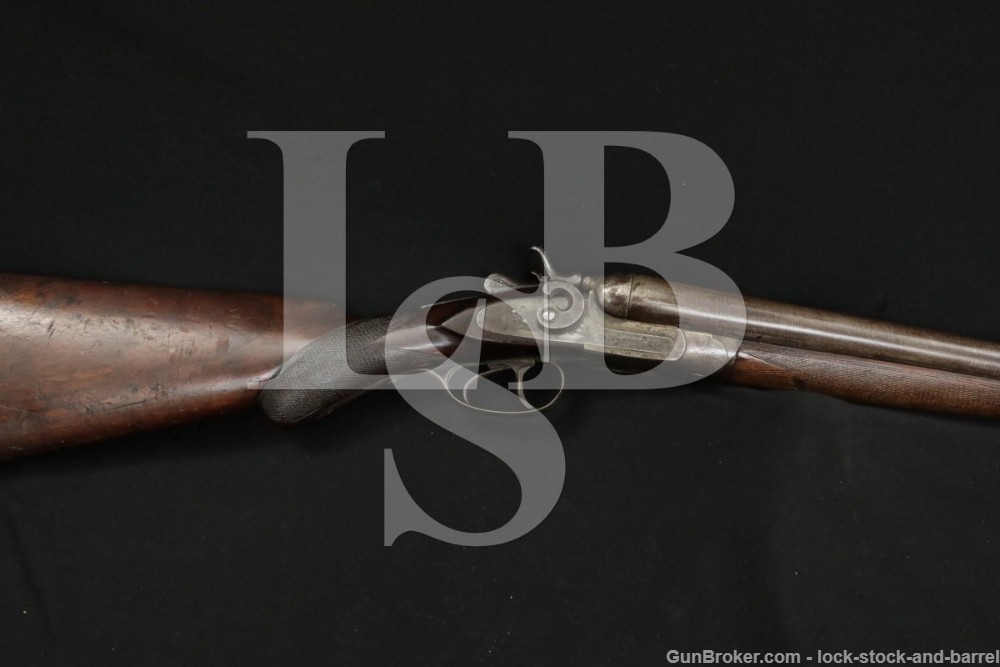 Model: Damascus Barreled Side by Side External Hammer Shotgun

Choke: The left barrel has an improved cylinder and the right one is modified.

Sights/ Optics: There is a brass bead at the muzzle.

Stock Configuration & Condition/ Grip: The stocks are two-piece checkered wood with detachable forearm and buttstock with flat comb, pistol grip and metal buttplate. The stocks have scratches, nicks and handling marks throughout. Notably the left side of the butt near the toe is heavily scratched and the forearm has some nicks that have disrupted the checkering.  The checkering is worn and largely dulled. The buttplate has an ornate design with several deers but has developed a good deal of oxidation. There are no chips or cracks in the wood. The LOP from the front trigger to the buttplate is 13 ?” and 12 ?” from the rear trigger. The drop at the heel is 1 ¾” and is 2 ½” at the comb. Overall, the stocks are in Fair condition.

Bore Condition: The bore is grey. There are some scattered patches of erosion in the bore.

Overall Condition: This shotgun retains about 25% of its finish. The finish is largely worn off the barrels and receiver with scattered patches remaining. There are handling marks, scratches and nicks scattered throughout. The shotgun’s markings remain clear. The screwhead on the bottom of the buttplate has some buildup in its slot but remains serviceable, the rest have minor toolmarks but remain sharp. Overall, this shotgun is in Fair condition.

Mechanics:The action functions correctly. The barrels lock up with light-moderate play to the receiver. We have not fired this rifle. As with all previously owned firearms, a thorough cleaning may be necessary to meet your maintenance standards

Our Assessment: This Belgium T.Parker double barreled shotgun is a 10 gauge that has exposed hammers and a trigger for each barrel. The shotgun was produced by a company in Belgium in the interwar period between WWI and WWII, as evidenced by the proof marks under the barrels. It was marketed in the U.S. under the T. Parker brand. This double barreled shotgun is a fun collector’s item that you do not want to miss out on.