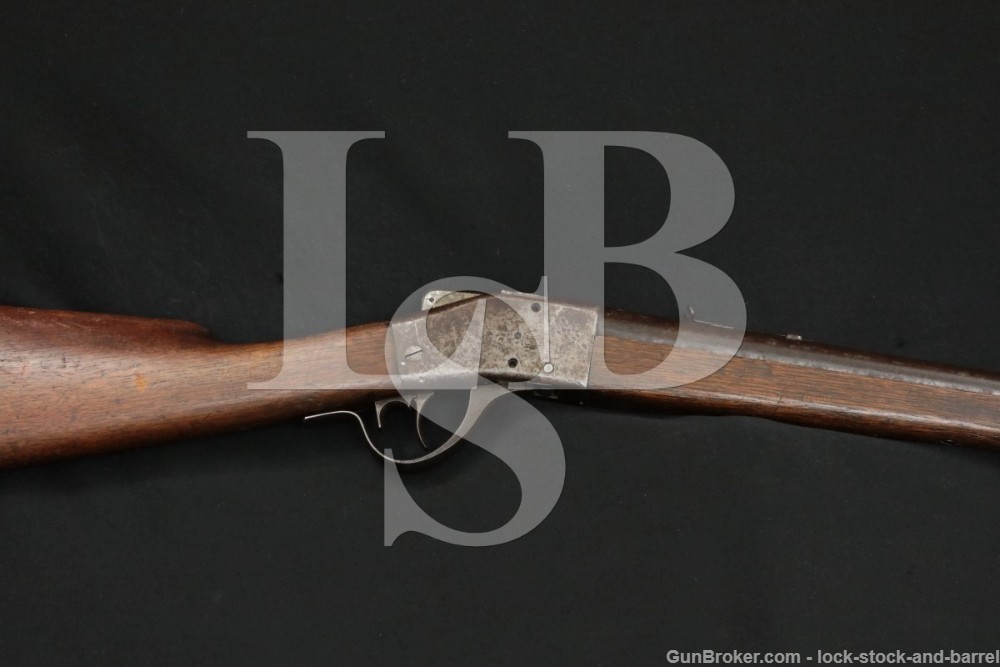 Stock Configuration & Condition: The stocks are two-piece smooth walnut with checkered steel buttplate, straight grip, and straight comb. The stocks have several scattered nicks, dings, scuffs and scratches. There are cracks around the front edge of the wrist and at the buttplate’s top tang. The wood shows some weathering with deep grain-lines and some discoloration. The wood is generally shy to the metal. The LOP measures 13 3/4″ from the front of the trigger to the back of the buttplate. The plate has scattered wear, erosion at the heel, and well defined checkering. Overall, the stocks are in about Good condition as refinished Antique.

Finish Originality: We do not see signs of refinishing, but the barrel is likely not original to the receiver.

Bore Condition: The bore is dark with well defined rifling. There is light-moderate erosion and pitting scattered through the bore.

Overall Condition: This rifle retains about 3% of its metal finish. Remaining finish is case-color on some internal surfaces, visible with the action opened. The portion of the barrel covered by the forend is mostly bright. Other surfaces have gone to a light-moderate patina with some scattered oxidation and erosion. Some areas of the receiver have been polished bright in the past, most notable at the markings on the left. There are scattered nicks, dings, scuffs and scratches as well as tool marks on the rear of the barrel and around the screw heads. The right of the receiver is missing two screws, it is not clear if these are related to the extractor not functioning correctly. Remaining screws range from tool marked with strong slots to disfigured with questionably useable slots. Remaining markings are worn, but legible. Overall, this rifle is in about Fair condition as Antique.

Mechanics: The extractor does not function correctly, it is not clear whether it is seized in place or if there is an arm or other piece missing. Otherwise, the action functions correctly, though it’s a little sticky and requires excessive force to operate. The lever locks up tight. The trigger is crisp. There is a sliding safety behind the trigger which engages automatically when the action is opened. We did not fire this rifle. As with all used firearms, a thorough cleaning may be necessary to meet your maintenance standards.

Assessment: Christian Sharps introduced one of America’s first and most successful breech-loading rifles with design starting in 1850 and improvements continuing into the 1870s and the metallic cartridge era. This rifle is a Model 1878 Military Rifle, just about the most advanced single-shot breech-loading design of the 19th century. The action utilizes the patent of Hugo Borchardt and is a hammerless falling-block design with an automatic trigger safety engaged when the action is opened fully. This example has been customized with what appears to be a replacement barrel, though we do not know what it is chambered for. The rifle shows wear consistent with its age and use as a working gun, likely keeping predators away from livestock and putting meat on the table. The 1878 models were only made for four years and this would make for a great display in a Sharps collection or a very worthwhile restoration project. Please see our photos and good luck!