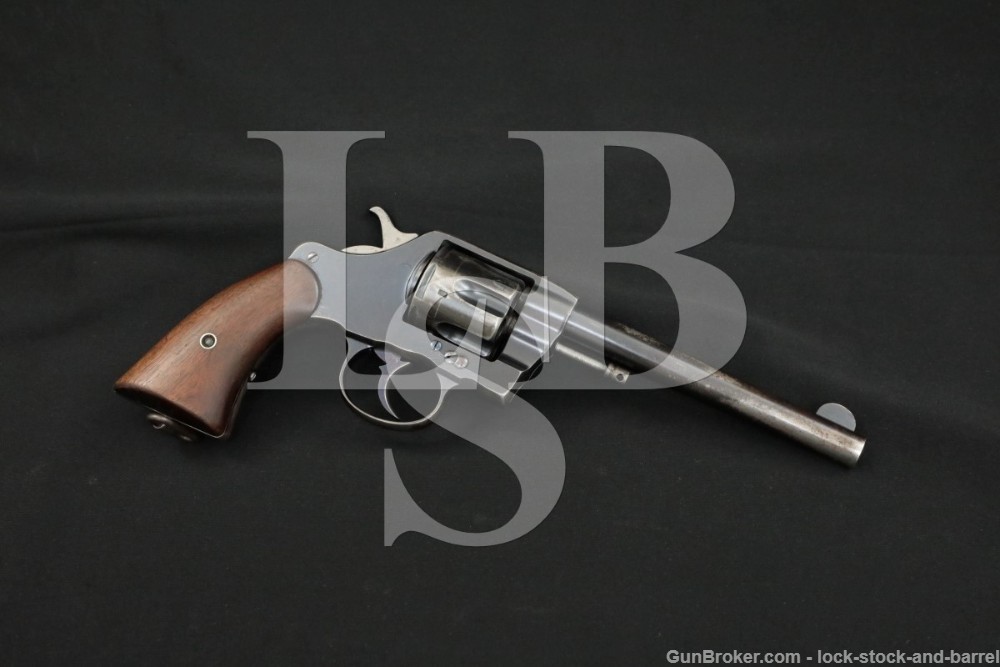 Sights/ Optics: The front sight is a blade that is fixed to the barrel. The rear sight is a square notch in the top strap.

Stock Configuration & Condition/ Grip:  The grips are two-piece wood. The wood is worn with scattered nicks, scratches and handling marks. There is a nick around the center of the left grip near the front tang and the bottom of the left grip is worn. There are no cracks or chips. Overall the grips are in Very Good condition.

Overall Condition: The pistol retains about 65% of its finish. The finish has been lost at the muzzle, the front left and right portions of the barrel, in a few patches on the top of the barrel, and the top of the frame. The finish is faded on the front and back straps including the trigger guard, much of the cylinder, the ejector rod and on most of the leading edges. There are some small patches of scattered surface oxidation, notably on the right side of the barrel. The cylinder has developed a turnline. There are some scattered handling marks, nicks and scratches. The markings on the top of the barrel are slightly worn, but they all remain clear. The screwheads have some toolmarks but remain sharp and serviceable. Overall the pistol is in Very Good condition.

Mechanics: The action functions correctly. The cylinder lock up is SOLID on all six chambers when the trigger is depressed. The double action trigger pull is smooth and the single action break is crisp. We did not fire this handgun. As with all previously owned firearms, a thorough cleaning may be necessary to meet your maintenance standards.

Our Assessment: This Colt U.S. Army model 1901 is a Single and Double Action revolver with swing out cylinder that takes .38 Long Colt rounds. Developed for the Army at the end of the 19th century, starting off as the model 1892, several variants were rolled out of the revolver culminating with the model 1903 with over 76,000 manufactured for the military by 1904. This particular pistol’s serial number can be traced to the year 1901, but otherwise there are not many details about its operational history. Many variants of what was originally the Colt 1892 were produced to address frontline troops’ complaints about the pistol’s effectiveness. As a result of its lackluster operational performance during the Filipino-American war, Colt developed the New Service revolver which held a higher caliber round. This revolver, despite being more than 100 years old, remains fully functional for those who wish to test it out at the range and it doubles as a unique historical item for collectors. Goodluck on your bid!