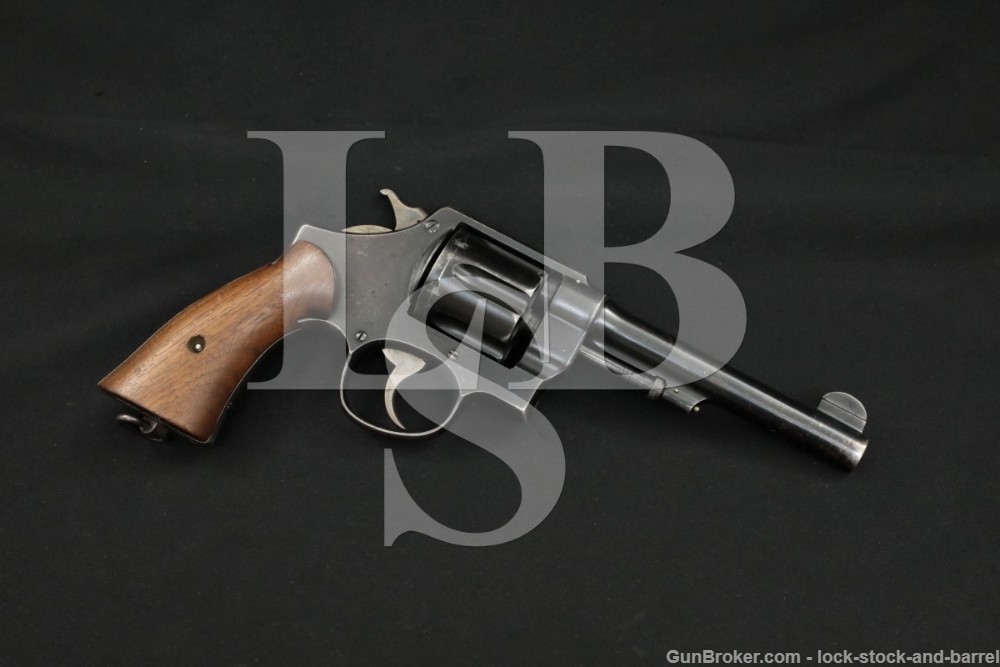 Stock Configuration & Condition: The grips are two-piece smooth walnut. The upper flank of the right panel extends onto the sideplate. There are some scattered little draglines and compressions. There is a hairline crack on the right panel at the corner where the front strap widens into the frame. There are some scattered dings, most noticeable on the bottoms. Overall, the grips are in about Very Good condition.

Bore Condition: The bore is mostly bright and the rifling is sharp. There is some scattered pinprick erosion.

Overall Condition: This handgun retains about 85% of its metal finish. There are some scattered areas of discoloration, scratches, dings, scuffs that have thinned the finish, and some finish loss on the edges. The grip frame has thinned. Some of the most noticeable finsih loss is on the front edges of the barrel and front edges of the frame. There are some little spots of pinprick erosion on the sides of the barrel at the muzzle. Some of the most noticeable dings are on the trigger guard and barrel. There is some finish loss on the topstrap. There is a turn line through the finish on the cylinder. The screw heads are sharp to lightly worn. The markings are clear. Overall, this revolver is in about Very Good condition.

Mechanics: The action functions correctly. The double-action trigger pull is smooth, single-action is crisp. The cylinder lockup is good on all chambers with some light side to side play. We did not fire this handgun. As with all used firearms, a thorough cleaning may be necessary to meet your maintenance standards.

Our Assessment: This is a Smith & Wesson .45 Hand Ejector Model of 1917 that S&W made for the U.S. Army during WWI. The Army wanted more 1911 pistols than Colt could make so they contracted with both Colt and S&W to produce the Model 1917 revolver in .45 ACP, so that both pistols and revolvers would use the same ammunition. The cylinders were designed to hold the cartridges in half-moon clips for ease of loading and extraction. The chambers were stepped so that individual cartridges could be loaded and fired when there wasn’t time to load the clips, but then the empty cartridges had to be removed manually. This revolver is marked with nice U.S. markings and has its original finish. Collectors of WWI revolvers as used by the U.S. may show an interest, but this revolver would also make a decent candidate for a fun new shooter. Please see our photos and good luck!