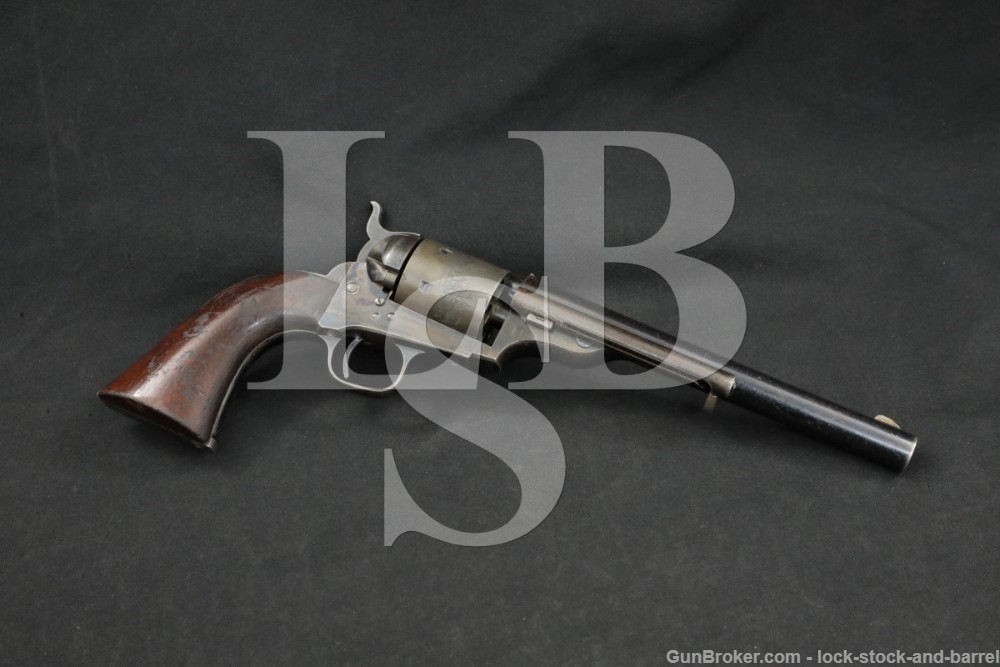 Sights / Optics: The front sight is a german silver blade fixed to the barrel. The rear sight is a “V”-notch integral to the rear of the barrel.

Overall Condition: This pistol retains about 70% of its metal finish. The finish is thinning at most edges. The barrel has generally strong finish with scattered light nicks and scratches. There are tool marks at the wedge on the right of the barrel and the ejector housing with a few tool-slips at the wedge screw on the left of the barrel. The frame and hammer retain strong case color with a few minor marks. The most notable finish loss is in the cylinder, backstrap, butt and the trigger guard ring. There is some scattered minor surface oxidation. The screw heads range from sharp to tool marked with strong slots. The markings are clear. The “91” and “U.S.C.Co.” markings are struck through the finish, possibly applied at the same time. Overall, this revolver is in about Fine-plus condition as Antique.

Mechanics: The action functions correctly. The cylinder locks up with little play on each chamber. The barrel has no play to the frame. The trigger is crisp. We did not fire this pistol. As with all used firearms, a thorough cleaning may be necessary to meet your maintenance standards.

Our Assessment: The latter half of the 19th century saw incredible developments in firearms technology, as various types of self-contained cartridge arms and repeating arms were invented. Some manufacturers and gunsmiths took advantage of the large supply of percussion revolvers, converting them to use cartridges. Colt’s was no exception, with their most notable conversion types being the Thuer, Richards and Richards-Mason conversions. There was one more stop on the way to the introduction of the Single Action Army, and that is the 1871-1872 Open Top revolver. This model used the same barrel and ejector as earlier conversions, but was designed from the ground-up as a cartridge revolver, not a conversion. The model was submitted to US Army trials, and the suggestions from the trials would be incorporated into the design of the Single Action Army. That model’s adoption by the US Army in 1873 along with substantial commercial success led to production of only about 7,000 1871-1872 Open Top Revolvers, making them quite scarce in general. An example such as this, with so much original finish, a remarkably good bore, strong mechanics, and nearly all matching numbered parts, is quite the find. Even the non-serial matching grip has had a marking applied to both it and the barrel, indicating that the grip has been paired to the gun for some time. It will make a prized addition to even advanced Colt and early cartridge revolver collections. Its U.S. Cartridge Company marking only adds to the historical and collector value of this revolver. Please see our photos and good luck!