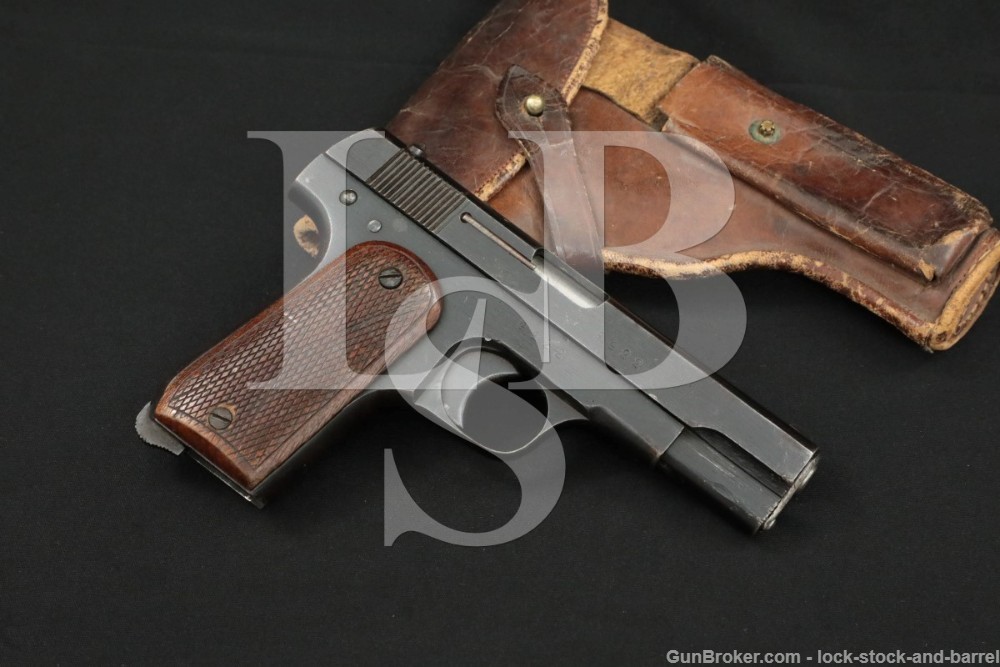 Make: It is unknown who manufactured these pistols, the best speculation is that they were made by Nippon Koshuba Juhogyo Kabushiki Kaisha (North China Co.) in Beijing. They were originally made at a factory in China or Manchuria by or under the supervision of the occupying Japanese. After the Japanese surrender in 1945, the factory came under the control of the Chinese, and pistols continued to be produced for the Chinese Communists.

Serial Number: 4422 (this serial number is noted in Derby & Brown’s book “Japanese Military Cartridge Handguns 1893-1945” as one of the reported and confirmed examples on page 271)

Markings: The right of the frame and slide are each marked “4422”. The bottom of the barrel, bottom of the slide, and the barrel bushing are each marked “422”. The inside of the right grip panel has “422” hand-scribed, the inside of the left panel has “422” hand-written in pencil and appears to have chinese characters also hand-written. The left of the slide and frame have matching five-pointed star symbols marked on Chinese Communist produced pistols.

Stock Configuration & Condition: The grips are two-piece checkered wood with smooth borders. The left panel has two horizontal scratches and a ding at the top-rear corner. The finish is thinning at most edges. There are tool marks around the screws. There are some other scattered minor marks. There are no chips or cracks. Overall, the grips are in Good-Very Good condition.

Finish Originality: The finish is Original, There is a brass pin in the slide which appears to be a retaining pin for the firing pin and may not be original.

Overall Condition: This handgun retains about 87% of its metal finish. The slide has oxidation and some light erosion on the top-left toward the front. The backstrap has handling wear and some minor oxidation. There are some scattered nicks, scuffs and scratches. The right of the slide has shallow dents in front of the ejection port. There are some punch marks along edges, these were used to denote where certain features and shaping were to be performed as much of this work was done by hand rather than with machines. The screw heads show tool use with strong slots. The markings are clear. Overall, this pistol is in Good condition (see Mechanics).

Mechanics: The fit between the safety lever and the hammer is improper, the safety can only be engaged when the hammer is forward or when it is over-extended to the rear. Otherwise, the action functions correctly. There is a brass pin in the slide which appears to be a retaining pin for the firing pin and may not be original. We did not fire this handgun. As with all used firearms, a thorough cleaning may be necessary to meet your maintenance standards.

Box, Paperwork & Accessories: This pistol comes with a brown leather flap-holster with a design matching the photos on pages 272-273 of the Brown & Derby book with red fabric-lined interior and snap-top flap for the spare magazine compartment. The flap portion of the snap is missing from this compartment. The holster shows moderate wear with fraying at edges, verdigris at the metal parts, but retaining intact stitching, in about Fair-Good condition. Please note, no magazine is included.

Our Assessment: Similar to the Nazis, the Japanese did what they could to use conquered areas to supplement their war effort. In the case of the Japanese invasion of China and Manchuria, there were factories used for the production of some arms to help supply the China Expeditionary Force. While some of these are well known, such as the Mukden Arsenal made Arisaka rifles, there is little verifiable information about the Sugiura Shiki pistols. This is not surprising given the violence of the conflict in China as well as the very limited production of this model. Fewer than 6,000 of the .32 ACP variant were made. Approximately two thirds produced had Japanese characters, with most or all produced under occupation. The remainder appear to have been produced by the Chinese Communists after the Japanese surrender. Given the limited foreign participation in the region, the poor relations with the Chinese post-war and the ensuing conflict and, well, communism of the region after the war, there are few remaining examples of these pistols, fewer still here in the States. As of 2013, when Harry Derby III and James Brown’s book “Japanese Military Cartridge Handguns 1893-1945” was published, there were only 13 reported and confirmed examples of the Sugiura Shiki, included serial 4422, this example. This is one of the most rare pistols associated with the Greater East Asian War, and will make a fine addition to any related collection, even the more advanced. Please see our photos and good luck!