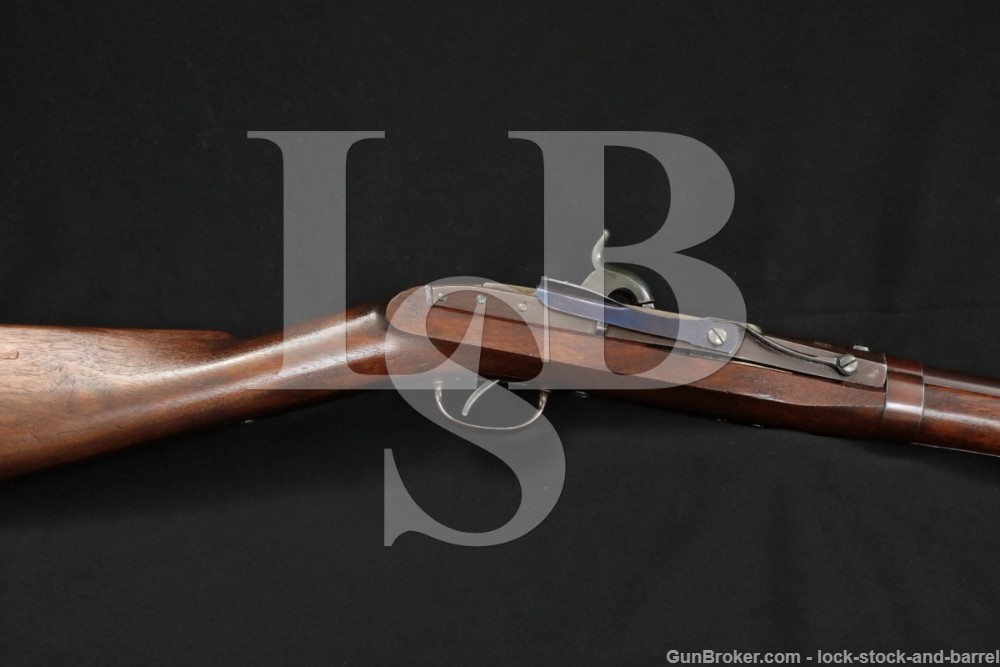 Markings: The top of the breech is marked “U.S / S.NORTH / MIDL TN / CONN. / 1847”. The right shoulder of the barrel, rear of the rear sight is stamped “GWH”. The left side of the wrist is marked with a “GWH” cartouche and the right side with a “WAT” cartouche. There are “H” inspection marks on the front barrel band, the top-left of the receiver at the rear, the breech-plate next to it, the rear sling bar mount below it, and the guard.

Sights / Optics: The front sight is a small pinched blade at the front of the barrel. The rear sight is a V-notch dovetailed to the receiver at the front.

Stock Configuration & Condition: The stock one-piece walnut with a forward barrel band, a rear band which incorporates the front mount for the sling bar on the left side (the other mount is screwed to the left-rear of the receiver), straight grip, straight comb and smooth iron buttplate. The stock has some scattered nicks, dings and scuffs, but no major wear or damage. The cartouches are still quite crisp and the shaping lines are defined. There are no chips or cracks. The LOP measures 13 1/4” from the front of the trigger to the back of the buttplate. The plate has light wear and scratching around the edges with some erosion at the heel and the top mounting screw. Overall, the stock rates in Excellent condition as Antique.

Overall Condition: This carbine retains about 90% of its metal finish. The finish is thinning a all edges. There is some scattered minor streaking in the browned finish. The fire-blue of the breech-lever is still quite strong and there is a surprising amount of case color left on the breech-block. The most notable wear is on the sling bar and there are a few other light nicks, scuffs and scratches. There are some scattered spots of stubborn dried grease around corners. The action shows minor operational wear. The screw heads range from sharp to lightly tool marked with strong slots. The markings are clear. Overall, this carbine is in Excellent condition.

Mechanics: The action functions correctly. The breech-block locks up tight. We did not fire this carbine. As with all used firearms, a thorough cleaning may be necessary to meet your maintenance requirements.

Our Assessment: John Hall developed the first American breech-loading small arm, also the first adopted on a large scale by a military, but was also extraordinarily influential in the use of interchangeable parts. Just to put things in perspective, in 1819, Hall’s design was a flintlock, but also a breech-loader, with interchangeable parts, made with water-mill powered machines. The Model 1819 was also rifled, making it both more accurate and faster to fire than the standard-issue musket. It should come as no surprise that his design was used well into the percussion age, and even saw some use in the American Civil War. This is an example of the Model 1843 Hall-North carbine, made by Simeon North (who himself is worth mentioning in the early American arms industry) in 1847. This carbine was not rifled as the 1819 Model was, but this allowed more extensive use before fouling became an issue, and was also a percussion design, making it faster firing and more reliable. It is shorter and lighter than the 1819 and also has an improved design to the breech-lever, having it mounted on the side rather than a hook on the bottom which would, well, hook on things in the field. Given this gun’s age, it is in tremendous condition, retaining about 90% of its original browned and case color finish, showing minor wear in its walnut stock, and having a bright bore. This example of the 1843 Hall-North carbine would be a great one to add to any early American small arms collection. Whether you have been looking for one or even if you have a nice one and would just like to upgrade. Approximately 10,500 were made in total and 5,000 of these were modified for use in the Civil War. Of the 5,000 which were unaltered, it’s unlikely that there are many left in this sort of condition. Please see our photos and good luck!