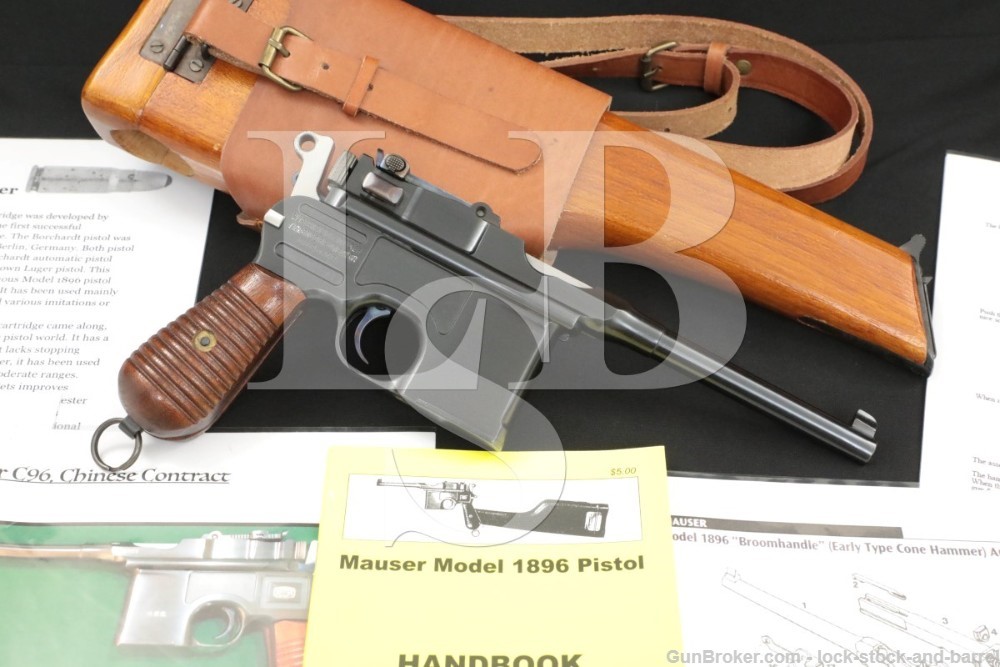 Markings: The left of the barrel extension is marked “873220”, the left shoulder is marked with a crowned “U”, the top of the chamber ring is marked “WAFFENFABRIK / MAUSER / OBERNDORF A/N”. The bottom of the barrel extension has inspection marks. The inside of the magazine floorplate is marked “3220”. The top of the bolt has a crowned “U”. The right of the frame is marked “WAFFENFABRIK MAUSER / OBERNDORF A NECKAR / D.R.P.u.A.P.”, the left has a Mauser banner logo at the rear and three chinese characters on the magazine. The rear of the hammer has an unfamiliar marking. Other than those described, there are no serialized parts that we could find.

Stock Configuration & Condition: The grips are two-piece serrated wood panels. The grips have no notable wear or damage, only light handling marks. There are no chips or cracks. The serrations are well defined. Overall, the grips are in Excellent condition as not original to the gun.

Bore Condition: The lands are mostly bright, the grooves are gray. The rifling is well defined. There is scattered erosion in the bore, mostly in the grooves.

Overall Condition: This pistol retains about 97% of its current metal finish. There are a few scattered light scratches and scuffs, most notable at the bottom-front of the magazine floorplate. There is infrequent minor erosion under the finish. There is minor operational wear. The markings are clear, a few have remnants of a white paint-fill. The screw head is tool marked with a strong slot. Overall, this pistol is in Fine condition as refinished.

Box, Paperwork & Accessories: This pistol comes with a wood stock/holster with brown leather carry strap, a Mauser Model 1896 Pistol Handbook, and a series of printouts with information about the model, cartridge, and disassembly instructions. The holster has minor wear with no cracks or chips, in Fine-plus condition as refinished and/or reproduction.

Our Assessment: The Broomhandle Model 1896 Mauser is certainly an interesting looking firearm. Its features are very distinctive with its tangent rear sight, forward magazine, grasping tabs for the bolt and ring hammer. In addition to being used in the Great War, popularized in Soviet films as the iconic weapon of the Russian revolution and civil war, it was also used as a basis for futuristic weapons like the blaster used by Han Solo in Star Wars. This example is a Model 1930, also known as an M30, an improvement over the original C96 design which shares its basic operating mechanism and shape. Late features of this pistol include a lack of milled slots on the sides of the barrel extension at the frame rails, late-design safety, and later marking patterns. Interestingly, this M30 has Chinese markings on the frame, and these pistols were very popular in inter-war China. If genuine, its condition is quite a surprise as that period saw extensive conflict all across China. This will make a neat piece to add to a Mauser or Chinese firearms collection and its high condition and distinctive markings will make a great addition to any collection. Please see our photos and good luck!