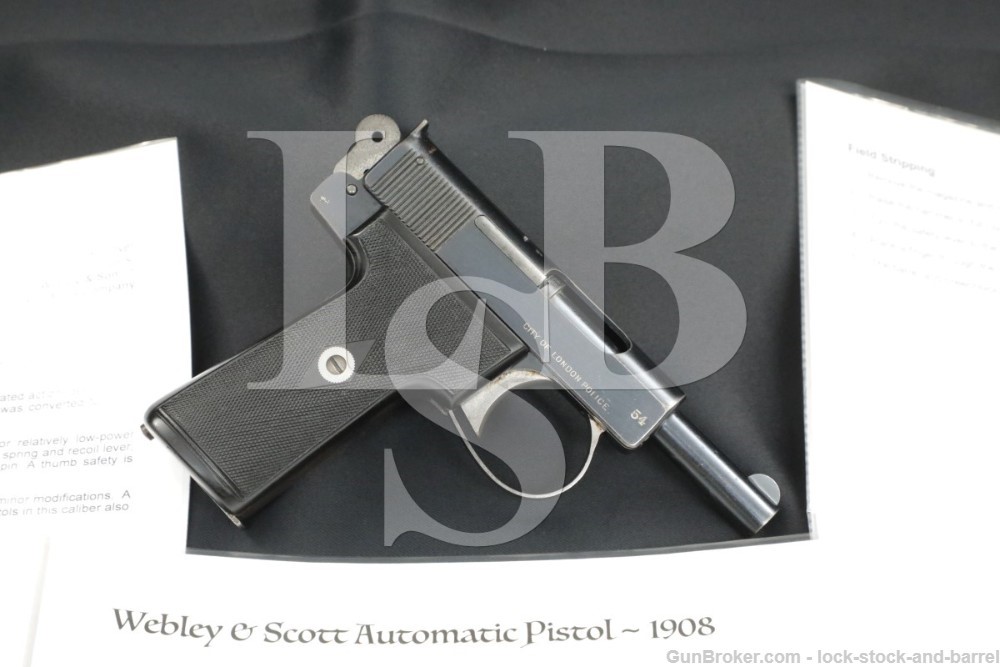 Sights / Optics: The front sight is a rounded blade fixed to the barrel. The rear sight is a “U” notch integral to the slide at the rear.

Stock Configuration & Condition: The grips are two-piece checkered black hard rubber with smooth diamonds around the grip screws. The left panel has a chip-loss at the trigger guard and shows some minor discoloration. There are a few other scattered minor marks in the otherwise well defined checkering. There are no cracks. Overall, the grips are in Very Good condition.

Bore Condition: The bore is mostly bright and the rifling is sharp. There is infrequent minor erosion in the bore, most at the muzzle-end.

Overall Condition: This pistol retains about 80% of its metal finish. The finish is thinning at all edges. There are some scattered minor nicks, scratches and infrequent finish wear on the slide and barrel. The grip areas show handling wear and some minor surface oxidation. The action shows operational wear. The screw heads range from sharp to tool marked with strong slots. The markings are clear and most have been filled with white. Overall, this pistol is in Very Good condition.

Box, Paperwork & Accessories: This pistol comes with a single 8-round magazine of the proper M.P. pattern. The magazine has operational wear with finish loss toward the bottom, intact feed lips and a strong spring, in about Very Good condition. Also included are printouts with information about the pistol, parts list and disassembly instructions.

Our Assessment: William John Whiting was a gun designer working for Webley & Scott tasked to develop a modern self-loading automatic pistol. The British wanted a pistol chambered for .455 Webley, a rimmed cartridge, and his Model 1904 design was an attempt to meet that goal, but was unsuccessful. A scaled down version in .32 A.C.P. became the Model 1905, which met with limited commercial success. This was continuously refined during its production and ultimately a total redesign resulted in the Model 1908, which would be destined to be the most successful of all Webley automatic pistols and with few modifications and variations would be offered until 1940. Part of the wild popularity of the pistol was due to the adoption of a similar model by the London Metropolitan Police in 1911. The M.P. model had a few differences from the 1908, including an integral rear sight and a magazine follower which would lock the slide back after the last round was fired. Following a series of violent crimes in which unarmed police officers were shot by criminals, as well as surrounding residents, it was decided to adopt a sidearm for the officers. While the Metropolitan Police purchased more than 1,000 of the pistols, the City of London Police ordered only sixty, making this example a particularly rare piece. Even better, it is listed by serial number in Gordon Bruce’s book on Webley Automatic pistols as one of the pistols still in the City of London Police inventory in 1957, specifically with D division. This pistol should be sought after by collectors due to its importance as a police pistol which guaranteed the popularity of Webley’s 1908 pistol as well as one of the very rare City of London Police guns. Please see our photos and good luck!