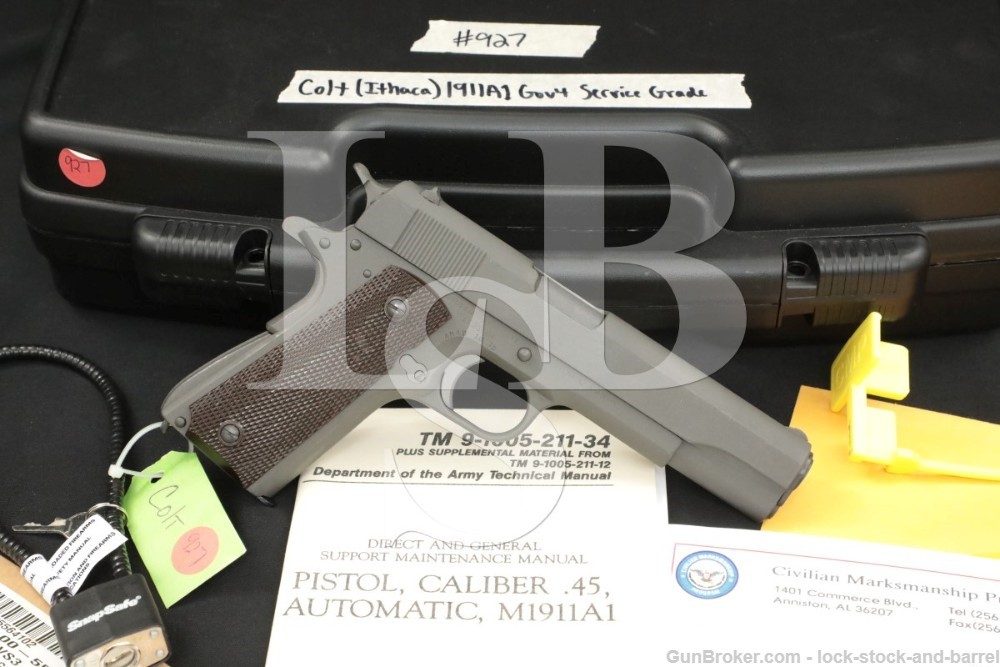 Sights / Optics: The front sight is ramped and serrated low profile blade. The rear sight is a flat top, square notch sight set into a dovetail.

Stock Configuration & Condition: The grips are checkered dark brown bakelite like material. The insides are marked “5564062” & “5564063”. The grips have some press wear and a few damaged checkers. Outside of these marks, the checkering is pronounced and the color is attractive. The grips rate in about Very Good overall condition and are consistent with a Service Grade gun.

Bore Condition: The bore is bright and the rifling is sharp. There is some fouling but no erosion in the bore.

Overall Condition: This handgun retains about 95% of its metal finish. There is very little wear to this finish, seen only as a few instances of surface marking and surface rubbing. The gun was likely never shot or even carried since the most recent refinish, making it a very high condition pistol. The screw heads are attractive. The markings are light. Overall, this handgun rates in about Fine condition for a Service Grade gun.

Our Assessment: The 1911 and 1911-A1 pistols served the military of the United States from 1911 to 1985, through two World Wars and the Korean and Vietnam wars. They gained a reputation as a reliable handgun with plenty of stopping power, and are held in high regard by those who have used them.

This gun saw service, then a rebuild at Augusta arsenal, and then another rebuild at Anniston… This example remained in US inventory until at least 1985, when it was arsenal refurbished at the Anniston Army Depot. It made its way to the CMP where it was sold as a Service Grade, in issuable condition. It has a great bore, not something you see on every 1911, intact grips and an arsenal applied parkerized finish.

It comes in a plastic case with a single magazine. This would make a nice addition for a collector, but it should also prove to be a great shooter, considered issuable by the CMP and not appearing to have seen much, if any use since being refurbished in 1985.