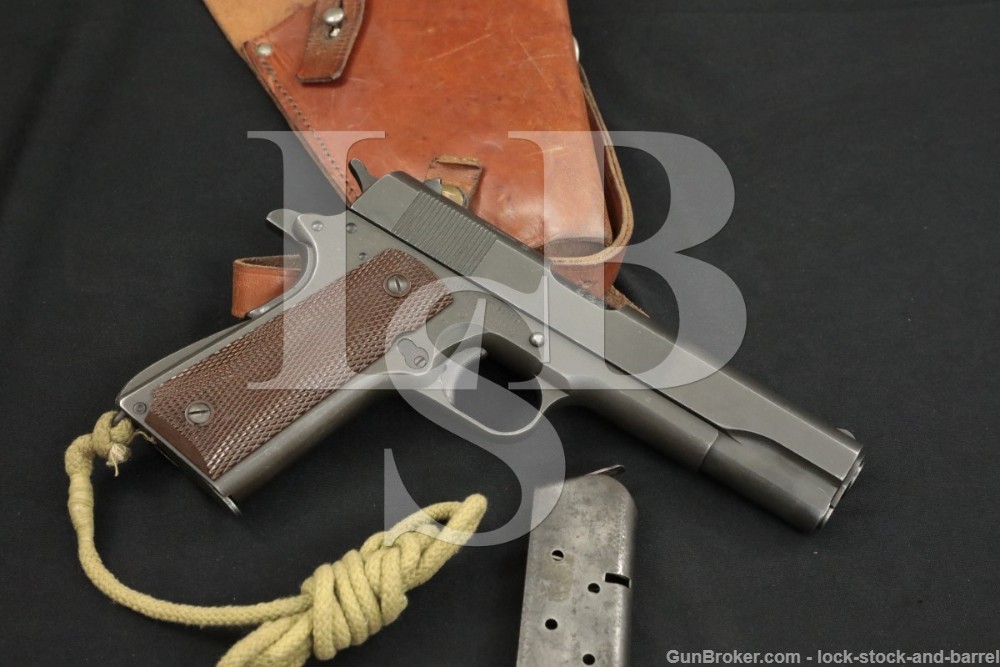 Stock Configuration & Condition: The grips are Keyes #12 & #16. The grips have minor handling wear with only a few scattered minor nicks and scuffs. There are no chips or cracks. The checkering is generally sharp. Overall, the grips are in about Fine-plus condition.

Bore Condition: The bore is gray and the rifling is clear. There is an unfortunate amount of erosion in the bore, it is 4 out of 10.

Overall Condition: This handgun retains about 95% of its metal finish. There is thinning to silver at the edges, some wear from the holster and strap wear from handling. There is a shallow “idiot mark” at the slide stop. The wear on this is less than would be expected, considering the life it has had… The screw heads are strong. The markings are crisp. Overall, this handgun rates in about Fine condition.

Box, Paperwork & Accessories: A very cool and vintage shoulder holster with a “NOT ENGLISH MAKE” cloth sticker on the back is included. Two “C-S / S” magazines are included, one is Fair and the other Very Good. The holster remains pliable and strong. A British lanyard is still attached to the ring.

Our Assessment: As was the case in the previous Great War, the outset of WWII found many nations starved for small arms, procuring just about anything they could get their hands on to arm their troops. Prior to the United State’s entry to WWII, there were various methods of supplying the Allies with defense products while maintaining neutrality, the final being the Lend-Lease Act which permitted the sale, lending and leasing of defense equipment to Allied nations by the U.S. government.

This Remington Rand 1911A1’s British proof markings indicate that it is one that was sold to the British government under the Lend-Lease Act in WWII. This Lend-Lease example is in Very Good-Fine condition with 95% of its parkerized finish remaining. There is no mark that would indicate it having been sold out of service, so it is possible that this is a bring back.