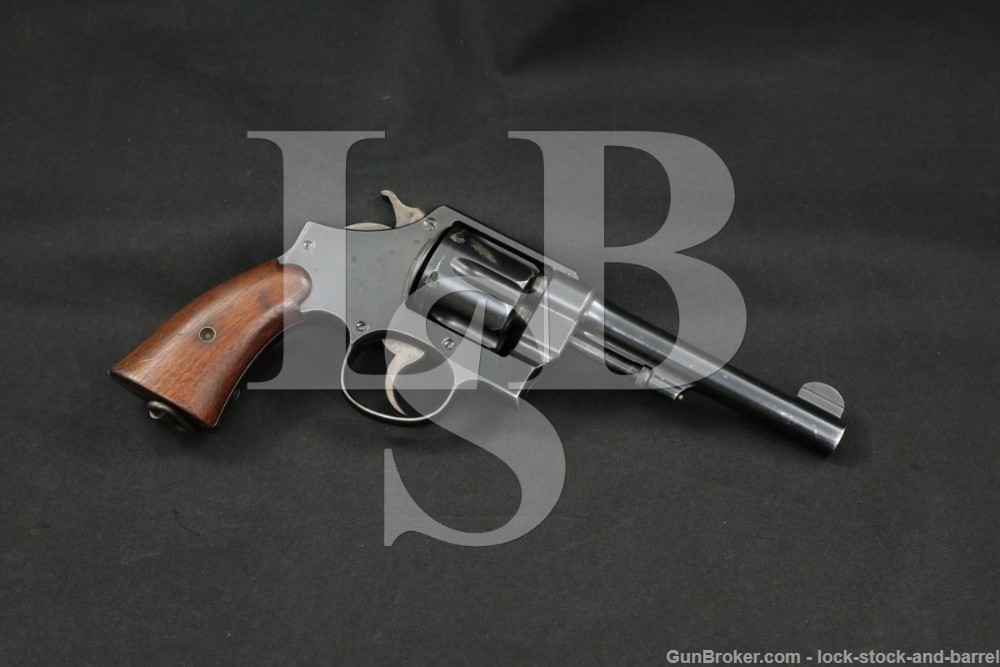 Bore Condition: The bore is semi-bright and the rifling is shallow. There is scattered erosion, mainly in the grooves.

Overall Condition: This handgun retains about 85% of its metal finish. There are some scuffs that have thinned the finish, light scratches, little nicks, and some scabs on the barrel. There are some little scabs and light erosion on the front sight. There is finish loss on the edges. There are some scuffs, scratches, spots of oxidation and thinning on the cylinder. The cylinder has a patch of light erosion with some scratches over it. The frame has some scattered spots of oxidation, light scratches, and some spots of light erosion. The scratches are most noticeable by the cylinder release and the erosion is most noticeable on the top strap at the rear. The grip frame has some oxidation and light patina. There are some marks into the top and bottom of the cylinder release. The screw heads are sharp to lightly worn. The markings are clear. Overall, this revolver is in about Very Good condition.

Our Assessment: This is a Smith & Wesson .45 Hand Ejector Model of 1917 that S&W made for the U.S. Army during WWI. The Army wanted more 1911 pistols than Colt could make so they contracted with both Colt and S&W to produce the Model 1917 revolver in .45 ACP, so that both pistols and revolvers would use the same ammunition. The cylinders were designed to hold the cartridges in half-moon clips for ease of loading and extraction. The chambers were stepped so that individual cartridges could be loaded and fired when there wasn’t time to load the clips, but then the empty cartridges had to be removed manually. This revolver is properly marked with U.S. markings though it has been refinished. Collectors of WWI revolvers as used by the U.S. may show an interest, but this revolver would also make a decent candidate for a fun new shooter. Please see our photos and good luck!