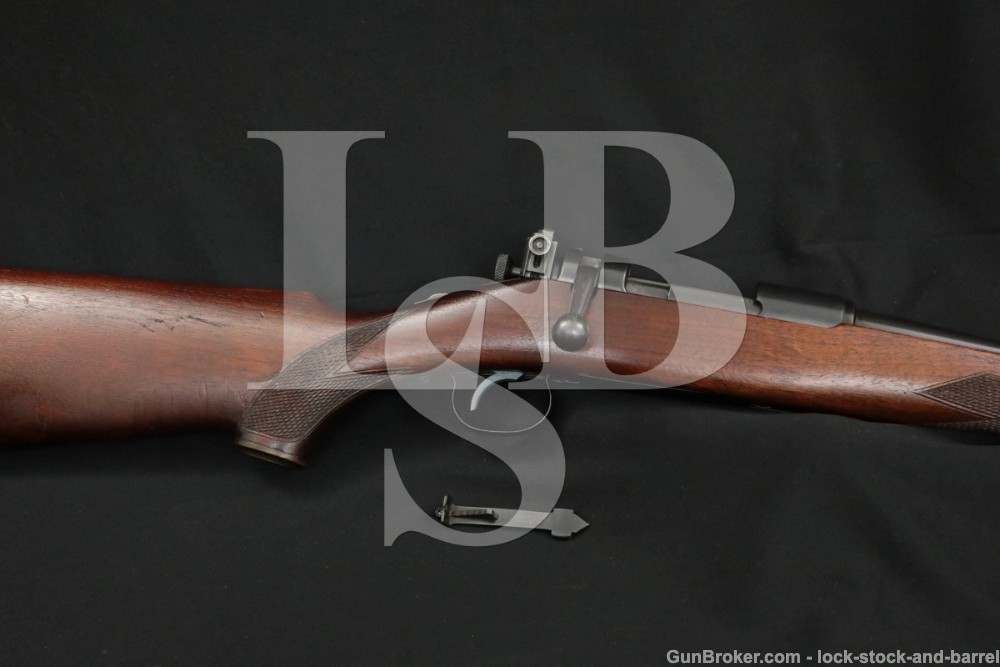 Year of Manufacture: Circa Early 1920s

Stock Configuration and Condition: The stock is a one-piece checkered wood with schnabel forend, pistol grip, straight comb, and serrated sheet steel butplate. The stock has scattered light nicks and dark compressions, most notable on the left side The right side of the buttstock has a few more notable dark draglines. There is a pair of more notable compressions on the comb. The checkering is well-defined. There are no chips or cracks. The LOP is 13 1/2” from the front of the trigger to the back of the buttplate. The buttplate has gone to white at the edge, and have light surface oxidation throughout. Overall, the stock rates in Very Good-to-Fine condition.

Bore Condition: The bore is bright and the rifling is sharp. There is no erosion, but there are scattered spots of minor fouling.

Overall Condition: This rifle retains about 95% of its metal finish. The barrel has intermittent light nicks, some through the finish, as well as a few spots of light surface oxidation near the front sight. The receiver has a few minor scuffs, most notable on the left side. The action has light operational wear. The screws show light tool marks and strong slots, and all markings are clear. Overall, this rifle rates in Fine condition.

Box, Paperwork and Accessories: This Savage 1920 includes the following:

Our Assessment: The Savage 1920 is the first bolt action sporting rifle offered by a major arms company anywhere in the world. Designed on the heels of World War I, Savage believed that returning soldiers would create a market for bolt-action rifles, as they had been the primary rifle type through the conflict. The firearms market at the time was dominated by lever action or Winchester pattern rifles. Bolt action rifles that were in use at the time were modified or ‘sporterized’ military rifles, with the work often performed  by their owners or a gunsmith. Savage offered something that was ready for the hunt square out of the box, and it proved to be popular. This example is from somewhere in the first third of production, likely in the early 20s. It’s broadly accepted that around 13,000 were produced, but sadly, records were destroyed in a fire and it is impossible to nail down precisely when this rifle was manufactured. Given its age, this example is in lovely condition, and will doubtlessly be a highlight in any collection. In overall Fine condition, all visible wear is consistent with normal use and it is obvious that this rifle was well taken care of. Mechanically, things are in good working order, and the bore is bright with only minor fouling. This example is equipped with a vintage Lyman aperture rear sight, and the original tang sight is also included. Do not miss a chance to own a fine piece of American firearm history.