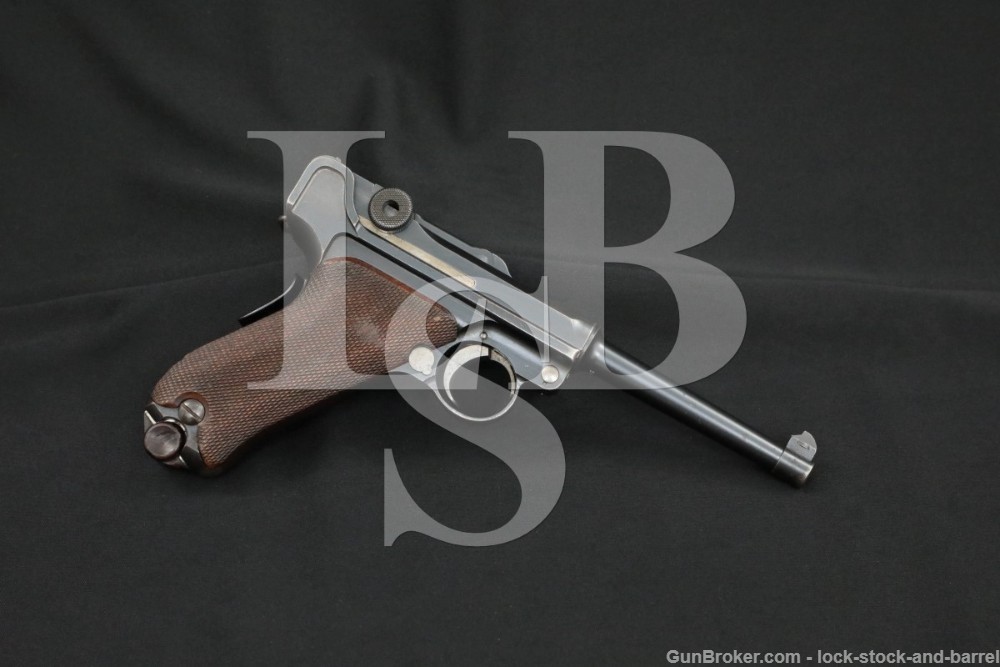 Stock Configuration & Condition: The grips are two-piece checkered walnut panels. The right panel has a patch of compressed checkers behind the magazine release and there are some other scattered spots with less notable compressions. There are a few light nicks and scuffs. The checkering is otherwise generally well defined. There are no chips or cracks. The grips are in Very Good overall condition.

Type of Finish: The finish is blued. The trigger, locking bolt, safety, ejector and the right side of the magazine release have a straw-colored finish.

Bore Condition: The lands are mostly bright, the grooves are gray. The rifling is generally sharp. There is light erosion, mostly in the grooves.

Overall Condition: This pistol retains about 85% of its metal finish. The finish is thinning at all edges. The grip areas show light handling wear and minor oxidation, most notable at the bottom of the frontstrap and the bottom-front of the trigger guard. There are some scattered light nicks and scuffs. There is wear on the left of the front sight boss. Most of the strawed finish has muted, strongest on the ejector. There is infrequent minor erosion, most on the barrel and right frame-rail. The action shows operational wear. The right grip screw is sharp, the left is disfigured with a useable slot. The markings are clear. This pistol rates in about Very Good overall condition.

Box, Paperwork & Accessories: This pistol comes with a total of one early style tin plated magazine with a wooden bottom piece. The wood has a triangle in circle Portuguese inspection mark. The magazine shows light wear and scattered minor discoloration from oxidation with intact feed lips and a strong spring, in about Very Good condition.

Our Assessment: The Luger (Pistole Parabellum) is perhaps the most aesthetically and ergonomically pleasing of all autoloading centerfire pistols. It is also one of the strongest, most accurate and most recognizable service pistols ever made. Georg Luger developed his famous pistol in 1898-1899 (starting with the Borchardt/Luger transitional pistol). The Luger is, essentially, a much improved Borchardt type pistol, which was itself based on the toggle action concept used by Sir Hiram Maxim in the world’s first practical machine gun. This is a pre-WWI produced export model made by DWM under contract for the Royal Portuguese Army in 1909. It is a 1906 pattern pistol adopted as the Model 1909 in Portugal. The Portuguese contract was short lived as the Portuguese monarchy was overthrown in October, 1910 and replaced with a Republic, in fact some of these pistols have been reported as having the crowned “M2” crest defaced as a result of the revolution. In all, there were only approximately 5,000 Portuguese Royal Army Lugers produced with this example, 2840, falling into the middle of production. The pistol is in Very Good condition with about 85% of its metal finish, matching numbered parts and strong mechanics. The bore has some light erosion but has mostly bright lands and should certainly be serviceable should you wish to fire the pistol. That said, given the low numbers produced, the Portuguese contract Lugers are quite collectible, and a pistol in this condition with matching numbers should attract collectors. Please see our photos and good luck!