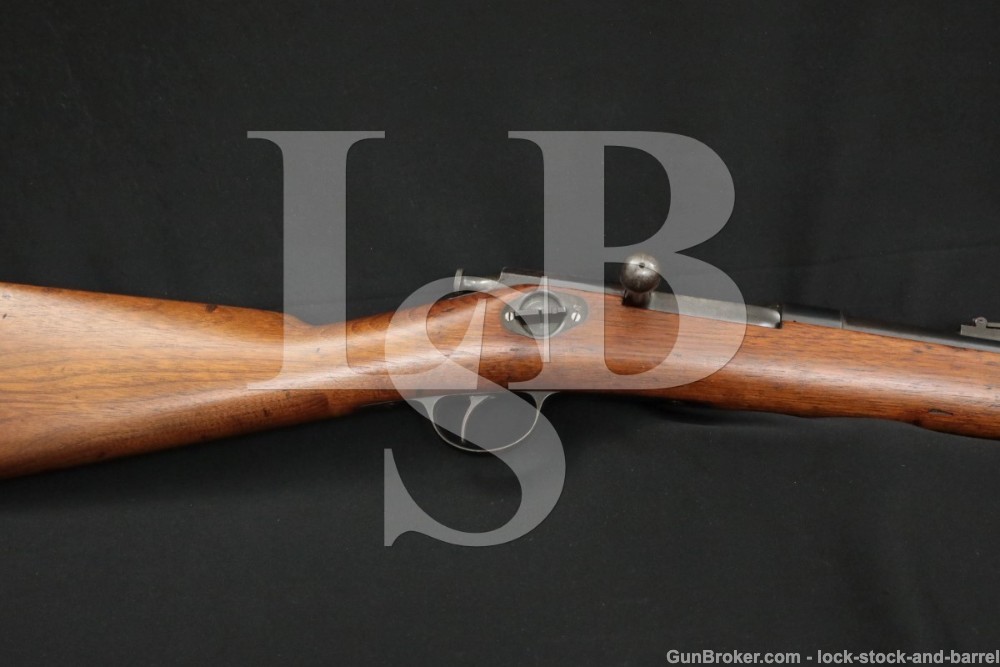 Caliber: .45-70 Gov’t (this rifle was designed for use with black powder, it should not be used with smokeless powder)

Sights / Optics: The front sight is a blade pinned to a slotted base fixed to the front of the barrel. The rear sight is a folding ladder sight presenting a “V”-notch when folded down. The base is stepped on the sides, allowing elevation adjustment by moving the slider on the ladder. When folded up, the slider has a “V”-notch and there is a “V”-notch at the top of the ladder. The ladder has graduation marks from “5” to “10” (100s of yards).

Stock Configuration & Condition: The stock is one-piece smooth walnut with spring-clip retained barrel band, straight grip, straight comb, steel carbine-style buttplate, safety/magazine cutoff switch on the right below the receiver and a saddle ring mounted to a plate on the left, opposite the switch. The wood has darkened nicely with age, especially where contact is made with the metal. The fit is very good and we do not see any evidence of sanding. There are a number of dings, scratches, rubs and scuffs, but there are no cracks. The LOP measures 13 3/8″ from the front of the trigger to the back of the buttplate. The plate has moderate erosion and a dark patina, some of which has been aggressively cleaned. Overall, the stock is in about Very Good – Fine condition as Antique.

Bore Condition: The bore is semi-bright with pronounced but lightly worn rifling. There is some scattered light erosion and infrequent pitting in the bore.

Overall Condition: This rifle retains about 45% of its metal finish. There are scattered patches of thinning and erosion on the trigger guard, barrel and frame. Some of these areas show a light cleaning. The finish has a general drift to patina, but still shows a lot more blue than is normally seen on this model.  The screw heads range from sharp to lightly disfigured with useable slots, the switch screws show the most wear. The markings are clear. Overall, this rifle is in about Fine condition as Antique.

Our Assessment: This is a Winchester Hotchkiss Carbine made between 1882 and 1883, though it retains the design of the original 1879 Model rather than the 2nd or 3rd models which replaced it. The rifle has a 5-round tubular magazine which extends back from the receiver into the buttstock and is chambered for the .45-70 Government cartridge. The design was intended to compete to replace the 1873 Trapdoor rifles in the United States military, and there were a small number procured by the Army and Navy, but the trials suggested that the Trapdoor should be retained.

The Army discontinued use of the Hotchkiss rifles, but the Navy kept theirs in service until replaced by the Lee Navy Model 1895. Winchester also pursued commercial production until 1893 with nominal success and a few small foreign military contracts.

This example of the 1st Model Carbine is in great mechanical condition, has a good amount of finish, and will make a fine addition to a Winchester rifle collection.