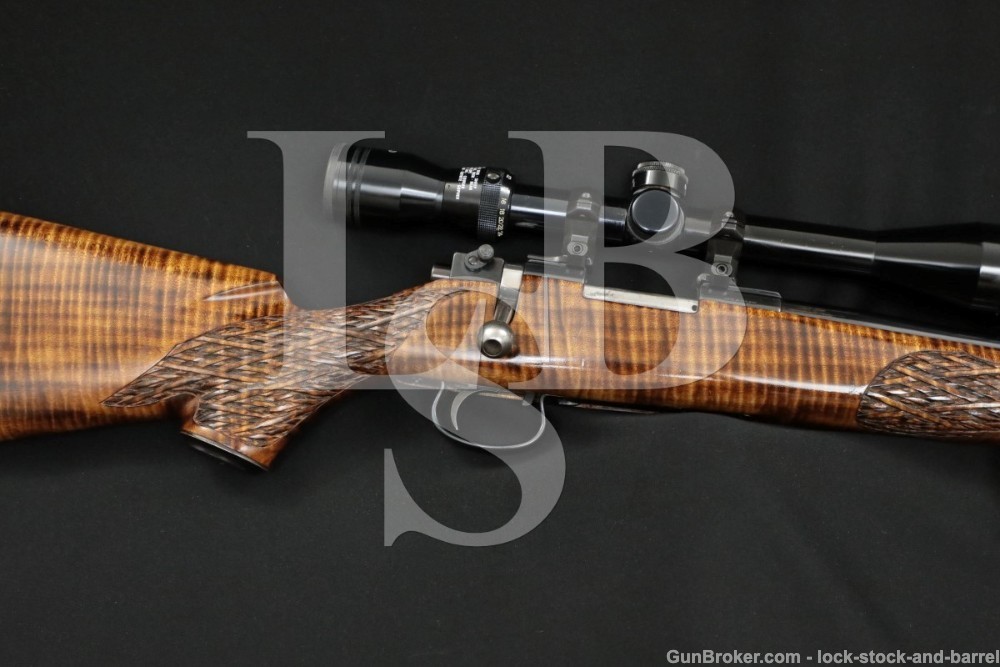 Sights/Optics: There is no provision for iron sights on this rifle. The textured receiver rib is notched for optic rings which have attached a Tasco 6-24×40 scope with duplex range-finding reticle. The scope body has scattered minor nicks and a few scuffs, the glass is fairly clear, and overall the scope rates in Very Good condition.

Stock Configuration and Condition: The stock is a one-piece wood with basket-weave checkered forend and pistol grip, fluted monte-carlo comb with cheek-piece, and fine-checkered sheet-steel buttplate. There are sling swivels on the belly of the buttstock and the underside of the forend. There are intermittent light nicks on the edge of the cheek-piece. The buttstock has scattered minor nicks and scuffs most notable on the comb heel. The right side of the forend has intermittent minor nicks and compressions. The LOP is 13 1/2” from the front of the trigger to the back of the buttplate. The buttplate has light thinning along the edge and at the heel and toe. Overall, the stock rates in Fine condition.

Finish Originality: Original to the custom barrel; the receiver is refinished.

Overall Condition: This rifle retains about 96% of its current metal finish. The barrel has a few clusters of light nicks and scuffs most notable near to the receiver. The receiver has a minor plum hue and on the right side there are light scuffs and a few spots of minor surface oxidation. The action has light operational wear. The screws have minor tool marks with strong slots. While there is minor dishing apparent on the receiver markings, all markings are clear. Overall, this rifle rates in Fine condition, as custom refinished.

Box, Paperwork and Accessories: This L46 includes the following:

—the Tasco scope as described above.

Our Assessment: SAKO is a Finnish brand that began operations in the early 1920s primarily for the Finnish defense forces. Production of civilian arms began in 1942 with the L42. Civilian production was expanded with rifles such as the L579 Forester or the Ruhimaki (L46) on offer here, a robust bolt-action rifle. This L46 is from quite early in commercial production, around 1960 to 1962, and features a custom .222 Remington barrel from Shilen and rather ornate woodwork. This L46 is in Fine condition, with very little wear given its age. The action is smooth, and the bore is in great shape. The winner will have a great rifle on their hands! Good luck and happy bidding!