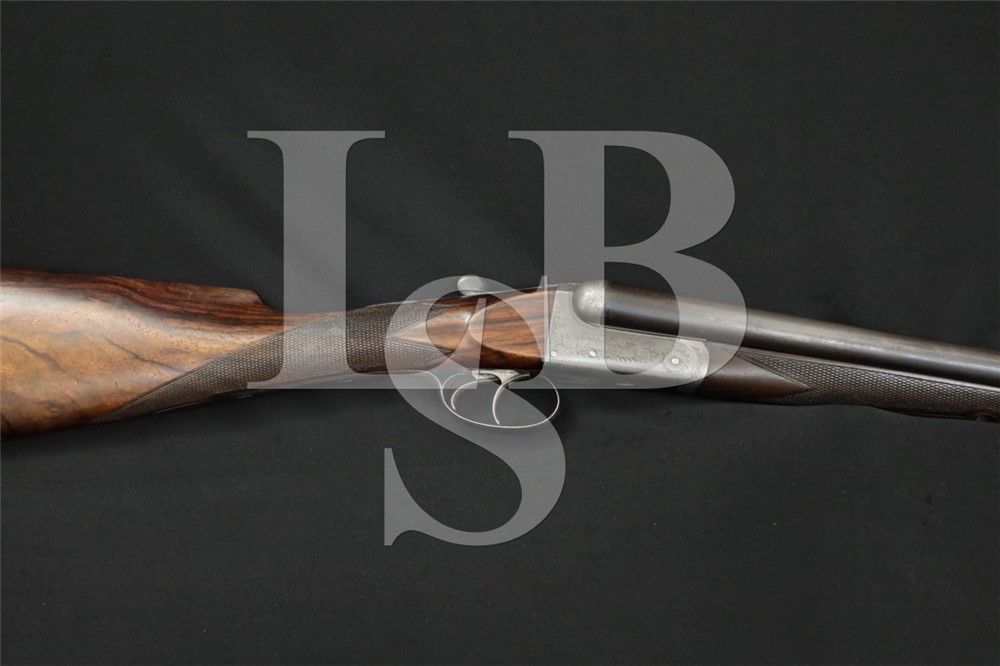 Markings: The top of the rib is marked “J. WILKES (LATE OF J.D. DOUGALL & SONS) 1 LOWER JAMES ST GOLDEN SQUARE LONDON”. The bottom of the left barrel, the guard, and the water table are each marked “4374”. The barrel flats and water table have British proof marks. Each side of the receiver has “J. WILKES” on banner. The receiver, guard, lever and exposed portions of the forend iron and latch assemblies have decorative scroll and border engraving. The initial plate in the belly is marked “CN”.

Sights/Optics: There is a silver-colored bead at the front of the rib.

Stock Configuration and Condition: The stocks are two-piece checkered walnut with splinter  forend, straight grip, straight comb, a triangular horn tip inlaid to the forend and a serrated horn buttplate. There are some scattered light nicks, scuffs and scratches, most in the buttstock. There is a grain-line crack near the toe which does not extend to any edges and appears to be at an oddly shaped knot. The checkering is well-defined. There are no chips. The forend has minor play to the barrels. The drop at comb is 1 1/4”, the drop at heel is 2”. The cast is about neutral. The LOP measures 14” and 13 1/8″ from the fronts of the triggers to the back of the buttplate. The plate has scattered scuffing and scratches, a few dings in the otherwise well defined serrations, and a loss at the toe. Overall, the stocks rate in Very Good condition.

Bore Condition: The bores are mostly bright. There are a few spots of light erosion in the bores, most notable in the left about 6-8″ from the muzzle.

Overall Condition: This shotgun retains about 70% of its metal finish. The finish is thinning at all edges. Most of the balance is in handling wear on the receiver, guard and the sides of the barrels over the forend. There is some other scattered light wear. There are scattered light nicks, scuffs and scratches. The receiver retains strong case color on the water table, standing breech and under the lever on the top tang. The action shows operational wear. The screw heads range from sharp to tool marked with strong slots. The markings are clear. Overall, this shotgun rates in Very Good condition.

Mechanics: The action functions correctly. The barrels lock up with minor play to the receiver. The safety engages automatically when the action is opened. We have not fired this shotgun. As with all used firearms, a thorough cleaning may be necessary to meet your standards.

Our Assessment: The Wilkes family has a long history of gunmaking, going back to 1820. John Wilkes trained with his family business, Edwin Hodges, and most notably with J.D. Dougall, eventually striking out on his own in 1894. The Wilkes family would have five generations of gunmakers, mostly focused on sporting guns but also producing a belt gun for the Special Operations Executive during WWII. The company made some of the finest London Best guns in the 20th century and continued operations into the early 21st. This is a fairly early example, produced right at the turn of the century, and is still in nice shape. The gun shows wear consistent with use in the field over the past century, but still looks great. The barrels have some minor play to the frame, but if this were taken up it could return to the field. As it is, the gun is a nice example of the Wilkes family’s work and would make a great addition to a fine European sporting guns collection. Please see our photos and good luck!