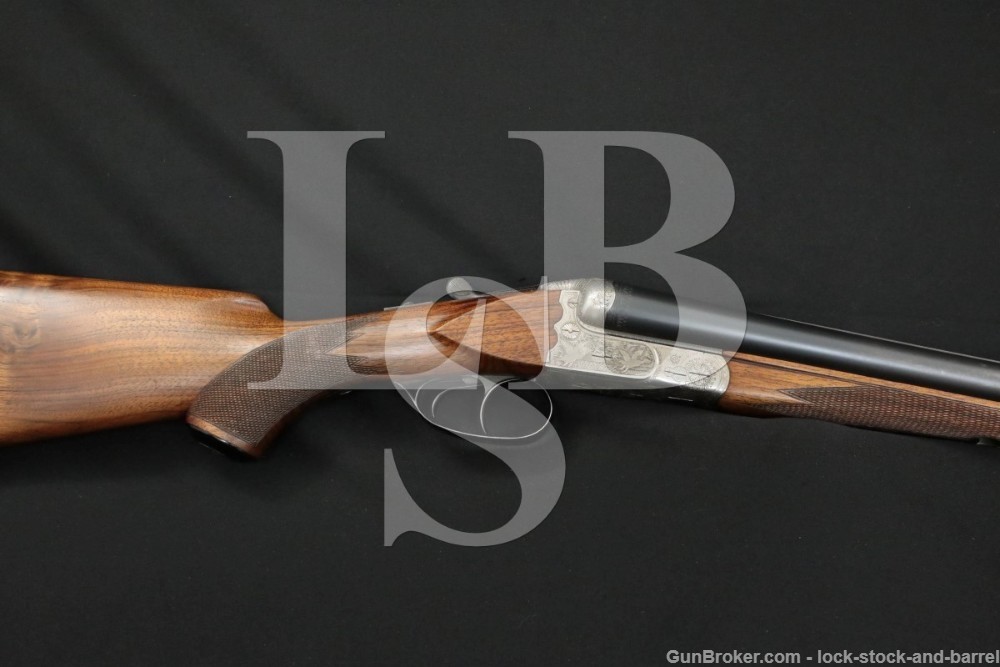 Action Type: Boxlock, Hammerless, Top-Break, Side by Side with Double Triggers, Cocking Indicators, and Ejectors

Sights / Optics: There is a brass bead mounted to the front of the rib. The top of the rib is concave and finely checkered to reduce glare.

Stock Configuration & Condition: The stocks are two piece checkered walnut with splinter forend, capped pistol grip, straight comb, cheekpiece, checkered black hard rubber Simson buttplate and a sling swivel in the belly (the other is mounted to the bottom rib forward of the forend). The forend has a couple of dings in its checkering toward the left-front. The buttstock has some scattered light nicks, scuffs and scratches. The checkering is well defined. There are no chips or cracks. The LOP measures 14 3/8” and 13 3/8″ from the fronts of the triggers to the back of the buttplate. The plate has minor wear with a couple of spots of residue in the well defined checkering. Drop at comb is approximately 1 5/8″, drop at heel 2 5/8″. The cast is about neutral. The stocks rate in Very Good-plus overall condition.

Overall Condition: This shotgun retains about 90% of its metal finish. The finish is thinning at most edges. There is some light wear along each side of the barrels above the forend, with some more notable wear and light scuffing along the side of the right barrel. There are a few other scattered minor nicks and scuffs. The receiver has infrequent and very minor discoloration. The guard and controls show light handling wear. The action shows light operational wear. The screw heads are mostly sharp with some lightly tool marked with strong slots. The markings are clear. Overall, this shotgun rates in Very Good-plus condition.

Mechanics: The action functions correctly including ejectors. The barrels lock up with no play to the receiver. The cocking indicators are small pins which project from each side of the receiver when that side’s striker is cocked. The safety engages automatically when the action is opened. We have not fired this shotgun. As with all used firearms, a thorough cleaning may be necessary to meet your maintenance standards.

Our Assessment: The Simson company has had a rollercoaster of a history beginning in 1856 with the purchase of one third of a steelhammer works in Suhl. They began by producing guns and gun barrels, adding bicycles and automobiles to their product line in the late 19th and early 20th centuries. During WWI they produced rifles for the German army and in the aftermath, they were selected to produce all military-contract Luger pistols from 1925-1934. In addition to their military production, they produced handguns, rifles and shotguns for commercial sale. Unfortunately, Simson was a jewish family and they fled Nazi Germany in 1936, their manufactory being absorbed into BSW. The factory was controlled by the Nazis and then later the Soviets who would continue production of bicycles, motorcycles and automobiles. Eventually, the Simson name was returned and the company focused more on mopeds, continuing production all the way through 2002. This shotgun is a post-WWII Simson boxlock hammerless. It is a great representation of a 1st Quality East German sporting gun with great attention to detail and design, cocking indicators, winged fences, and decorative engraving. It appears to have served a responsible sportsman well, showing wear consistent with a few trips in the field. This gun can return to dropping birds or would make a fine addition to a European shotgun collection. Please see our photos and good luck!