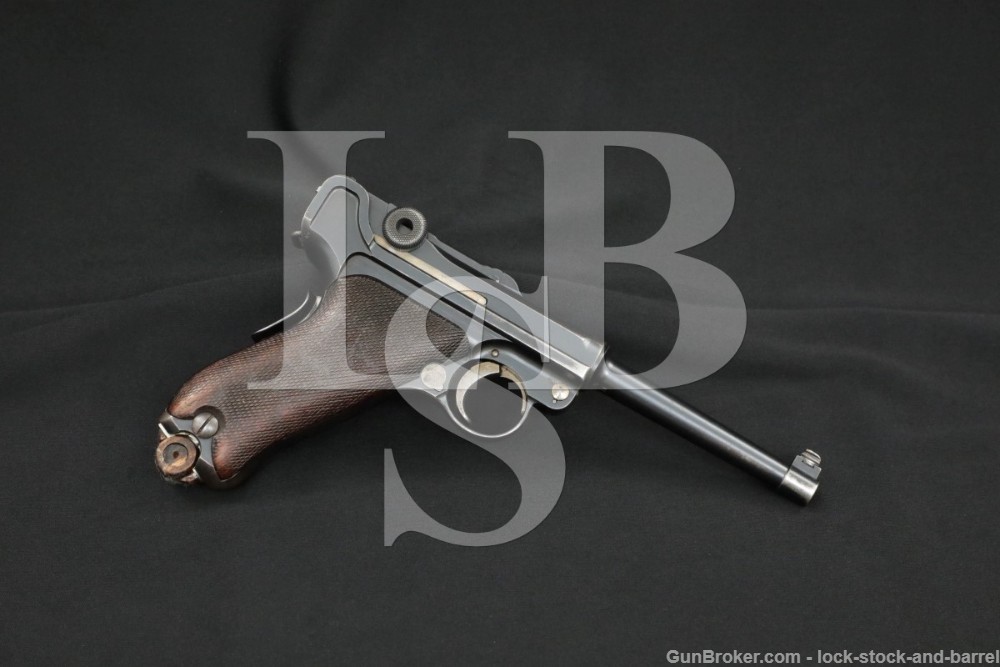 Sights / Optics: The front sight is a blade dovetailed to a base at the front of the barrel. The rear sight is a “V”-notch integral to the back of the rear toggle.

Stock Configuration & Condition: The grips are two-piece checkered walnut. The grips have some areas of smoothed checkers with some light nicks and scuffs. The checkering ranges from well defined to smoothed. There are no chips or cracks. Overall, the grips are in about Very Good condition.

Type of Finish: The finish is blued. The safety, trigger, locking bolt, magazine release and ejector are straw colored. The pins holding the front and rear toggles are fire blued.

Bore Condition: The bore is gray with well defined rifling. There is scattered light-moderate erosion in the bore, heaviest in the grooves.

Overall Condition: This pistol retains about 87% of its metal finish. The finish is thinning at all edges. There is light handling wear in the grip areas, most toward the bottom, and the controls show handling wear. The action has operational wear. There is finish wear at the muzzle on each side with some wear on each side behind the boss at the muzzle. There is some light erosion in the worn areas on the left of the barrel and some scattered minor oxidation. The screw heads are lightly tool marked with strong slots. The markings are clear. Overall, this pistol rates in Very Good condition.

Mechanics: The action works correctly. The barrel assembly is tight to the frame. We have not fired this pistol. As with all used firearms, a thorough cleaning may be necessary to meet your maintenance standards.

Box, Paperwork & Accessories: This pistol comes with a single 8-round magazine. The magazine has light operational wear, intact feed lips and a strong spring. The wood floorplate has some kind of stubborn, sticky residue on it. Overall, the magazine is in Very Good condition.

Our Assessment: The Luger (Pistole Parabellum or P-08) is perhaps the most aesthetically and ergonomically pleasing of all autoloading centerfire pistols. It is also one of the strongest, most accurate and most recognizable service pistols ever made. Georg Luger developed his famous pistol in 1898-1899 (starting with the Borchardt/Luger transitional pistol). The Luger is, essentially, a much-improved Borchardt type pistol, which was itself based on the toggle action concept used by Sir Hiram Maxim in the world’s first practical machine gun. Soon after the Luger was developed, a small batch was made for testing by the United States Army as the M1900 American Eagle, chambered in 7.65mm Luger with a 4 ¾” barrel. Another 5000-7000 American Eagles were made for commercial sales in the United States. When the “new model” Luger came out, several thousand more were made as the M1906 American Eagle, chambered in both 7.65mm and 9mm Parabellum. This pistol is an M1906 American Eagle with a 4 ¾” barrel chambered in 7.65mm Luger. The serial numbers on the pistol are matching. The pistol is in about Very Good condition with about 87% of its original finish remaining, a decent bore and strong mechanics. The American Eagle pistols are generally highly sought after by the collectors, and with is matching numbers and original finish, this one isn’t going to be any different. Please see our photos and good luck!