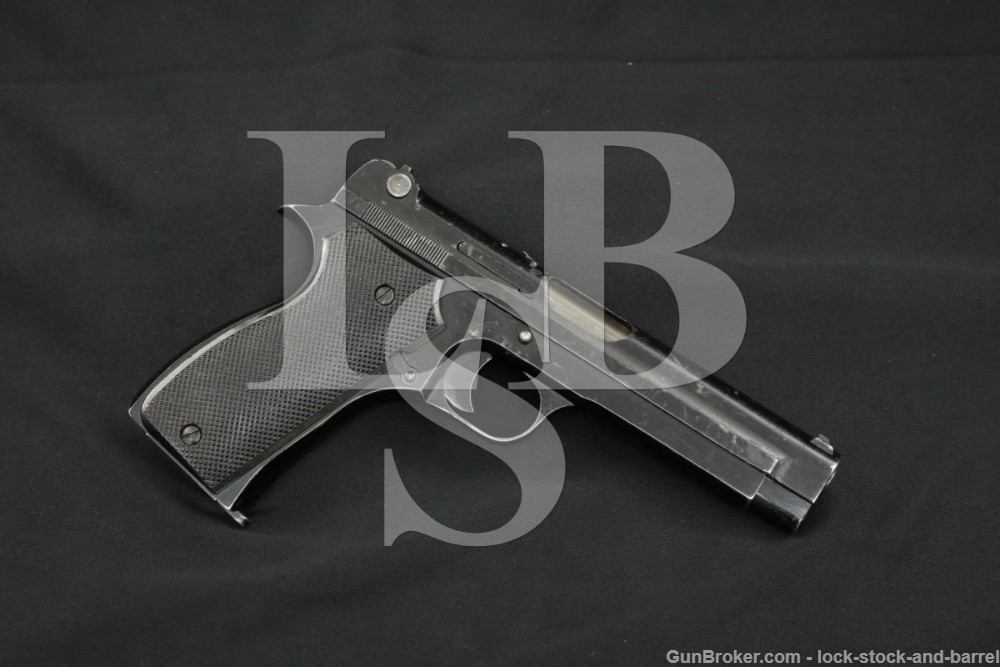 Sights/Optics: The front sight is post on a base dovetailed into the slide. The rear sight is a square-notch that is integral to the slide.

Stock Configuration, and Condition: The grips are two-piece black checkered hard rubber with smooth borders. There are light nicks along the edges of both panels and a few areas where the checkering is lightly worn or dinged. Otherwise the checkering is well-defined. There are no chips or cracks. Overall, the grip rates in Very Good-plus condition.

Overall Condition: This pistol retains about 70% of its current metal finish. The slide has light nicks, scuffs, and spots of finish loss throughout as well as moderate thinning at the front. The frame scattered light spots of finish loss and minor nicks, most notable on the dust cover. The frame has light thinning on most edges. Screws have moderate tool marks with usable slots and markings are generally clear. Overall, this pistol rates in Good-to-Very Good condition.

Box, Paperwork, and Accessories: This Ultra Star will ship with one (1) 8-round magazine with moderate operational wear, a strong spring, intact feed lips, and overall, rates in Very Good condition.

Our Assessment: Designed in the late 1930s by Charles Petter, a former French Foreign Legion captain and SACM engineer, the 1935A was brought to production after competing in trials set forth by the Commission d’Experiences Techniques de Versailles, and by 1939 was being delivered to the French Army. The pistol was ultimately in production from 1937 to 1950. This particular example was produced during the German occupation of France, likely between 1941 and 1944, and bears a German Eagle over “WaA251” Waffenamt code. It’s fascinating to consider that while many local officials made peace with their German occupiers, others fled and kept fighting, and more than likely were at the wrong end of weapons crafted by their French brothers and sisters. WWII weapon history is dense, and there is no end to fascinating stories such as the story of the 1935A. Good luck and happy bidding on this interesting pistol.