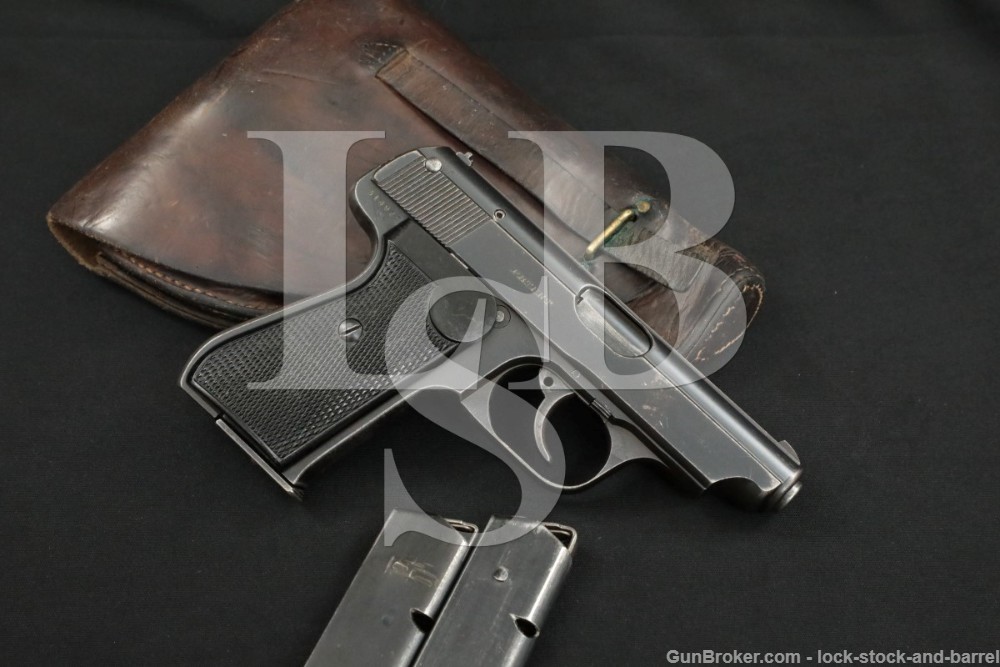 Action Type: This pistol is a single/double action semi-auto with a removable magazine and a de-cocker. It is blowback operated.

Stock Configuration & Condition: The grips are checkered black Bakelite and are marked with the intertwined “SS” logo near the bottom of the left grip. The grips have light handling wear with some scattered light nicks, scratches and scuffing in the smooth top portions. The checkering is well defined, generally sharp. There are no chips or cracks. Overall, the grips are in Very Good-plus condition.

Overall Condition: This handgun retains about 85% of its metal finish. The finish is thinning at all edges. The grip areas show handling wear and light surface oxidation. There are some scattered nicks, scuffs and scratches. There is some other scattered minor oxidation. The screw heads are tool marked with strong slots. The markings are clear. Overall, this pistol is in Very Good condition.

Mechanics: This pistol features a de-cocker mounted on the left side of the frame. There is a slide-mounted safety lever. On this model, the slide does not lock back on an empty magazine. The action functions normally. We did not fire this pistol. As with all firearms, a thorough cleaning may be necessary to meet your maintenance standards.

Box, Paperwork & Accessories: This pistol comes with a brown leather holster and a total of three 8-round magazines. The holster shows moderate wear with scattered discoloration, verdigris at the metal parts, and intact stitching, in Good condition. Each magazine’s floorplate is marked with the “SS” monogram logo and “CAL. 7,65”. The front edge of each floorplate is serrated, which is good as one is a little bit sticky, the other requires significant force to remove, but the third drops free. One magazine is marked “345915 / I” on the right of the body. The magazines show operational wear, some minor oxidation, intact feed lips and strong springs, in Very Good condition.

Our Assessment: J. P. Sauer & Son is one of the oldest names in European firearms industry. They came out with their first automatic pistols just before WWI, and continued during interwar period. Since about 1932, Sauer engineers were working on an interesting trigger system that employed a concealed hammer and an external cocking and decocking lever, located on the side of the gun. The design was completed in 1938, when this pistol was brought to the market as the Sauer 38H (H stands for hahn, or hammer in German, to distinguish this pistol from earlier Sauer designs, all of which were striker-fired). The Sauer 38H pistol was used by various police and security forces in Hitler’s Germany; the Wehrmacht adopted this pistol as substitute standard and ordered some 200,000 of this model to be issued to officers, with the police ordering about 30,000. As the war progressed, the markings changed, the finish suffered, and then the safety and/or decocking lever were deleted. By April 1945, the U.S. Army occupied the area around the Sauer & Sohn plant. This is a nice example of the 1st Police variation, showing the fine finish of early-war production and with all of the features still included. The pistol is in Very Good condition and would make a nice addition to a WWII or police sidearm collection. Please see our photos and good luck!